AL is the abbreviation for Albania, the 140th largest country in the world. Officially Republic of Albania, Albania is a country located in Southeastern Europe, bordering 5 countries Montenegro, Kosovo, North Macedonia, Greece, and Italy. The capital is Tirana and major cities include Durrës, Vlorë, Elbasan, Shkodër, Fier, Kamëz, Korçë, Berat, and Lushnjë. 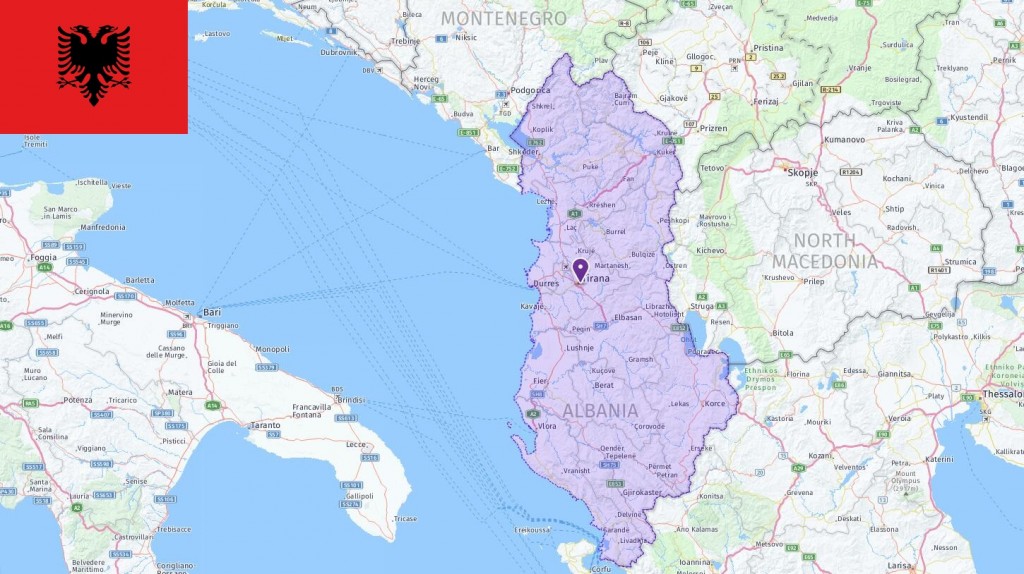 The most commonly used abbreviations about Albania are AL which stands for Albania and ALL which means Lek (Albania currency). In the following table, you can see all acronyms related to Albania, including abbreviations for airport, city, school, port, government, and etc.

The climate in the western part of the country is characterized by Mediterranean climate; hot and dry summers, and mild and humid winters. In the eastern mountainous regions, there is plenty of rainfall and cold winters. In the northeastern part of Albania, temperatures can drop to 20 minus in the winter, but are also characterized by hot summers.

The country’s biggest environmental challenges are linked to pollution because the Soviet-era industry is not modernized, and fast-moving to cities.

Albanians are descended from Illyrians who lived in ancient times in what is today Albania. The Ottoman Empire conquered Albania in the 15th century. After the first Balkan war, Albania declared itself independent of the Ottoman Empire in 1912, and the state was internationally recognized in 1913.

The interwar period was characterized by difficulties in building the country into a nation inward, while at the same time fearing surrounding powers. In 1939, the country was occupied by Italy, which created a Greater Albania, which included Kosovo and the Albanian parts of northern Macedonia. After World War II, the country established a communist regime, led by Enver Hoxa. In 1947, Albania broke up with Yugoslavia, and allied with the Soviet Union, later with China.

Albania quickly developed into one of the hardest communist and atheist dictatorships, where several thousand “enemies of the class” were executed. Until 1990, Albania was a very isolated and closed country. After the death of dictator Enver Hoxhas in 1985, cautious reforms began, and the first free elections were held in 1991. In 1991, the former Albania changed its name to the Republic of Albania. Albania was the last country in Europe to give up communism. The first non-communist government was elected in 1992. Since then, politics in the country has been characterized by conflict between the two major parties, the Socialist Party in Government and the Democratic Party in Opposition.. During the 1998-99 Kosovo war, nearly half a million Kosovo Albanians fled to Albania, and the country opened up more to the outside world.

Albania is a democratic and parliamentary republic based on the principle of power sharing. The government is the highest governing body. The president is the head of state and is elected for a term of five years and can only be re-elected once. The real political power lies with the government. The legislative power lies with Parliament, which is elected every four years.

Civil rights such as religious and organizational freedom are respected by the Albanian authorities. Despite Albania being regarded as democratic on paper, politicians have had difficulty creating democratic tradition in the country. Almost all choices have been criticized for cheating and illegality. Corruption and organized crime are also a challenge in the country, despite the government’s efforts to stop this.

Albania is one of the poorest countries in Europe, with about one in seven Albanians living in poverty. Due to difficulties in obtaining a job in Albania, many move to Greece and Italy, and almost all families have at least one family member abroad. Despite the poverty in Albania, many are able to do well when they receive money from relatives abroad.

Albania has been working to become a member of the EU since 2006, and the EU has demanded reforms of both politics and economy in order for them to become members. Now the plans are ready for a membership in 2019.

During the 2000s, the economy improved. International trade grew primarily with Germany, Greece and Italy. Albania escaped direct consequences during the financial crisis of 2007, but had to find new trading partners as their neighboring countries were hit hard. Today, Albania deals mostly with other EU countries, with Italy as its main trading partner. Albania’s imports are significantly larger than its exports.