DZ is the abbreviation for Algeria, the 10th largest country in the world. Officially People’s Democratic Republic of Algeria, Algeria is a country located in northern Africa, bordering 6 countries: Tunisia, Libya, Morocco, Mauritania, Mali, and Niger. Algiers is the capital and most populous city. Other major cities include Oran, Constantine, Annaba, Blida, Batna, Djelfa, Sétif, Sidi Bel Abbès, and Biskra. 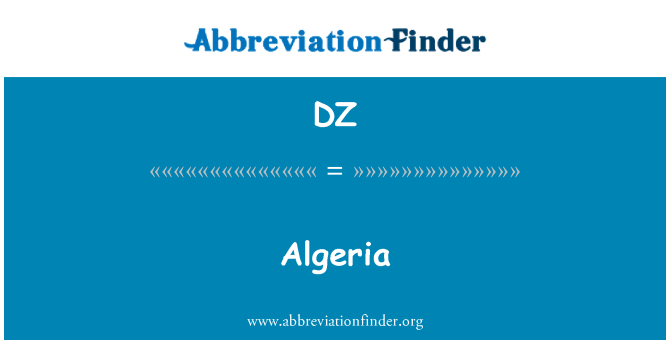 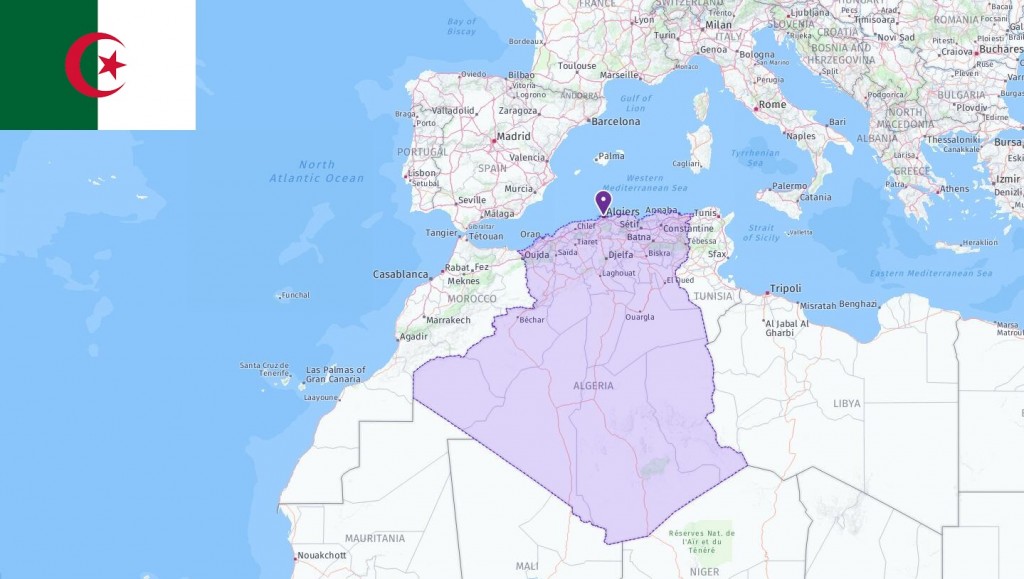 The most commonly used abbreviations about Algeria are DZ which stands for Algeria and DZD which means Dinar (Algeria currency). In the following table, you can see all acronyms related to Algeria, including abbreviations for airport, city, school, port, government, and etc.

Algeria is Africa’s largest land area, and is located on the continent’s north coast of the Mediterranean. The Sahara desert in the south covers over 85 percent of the country. Oil was found here in the late 1950s, and today it is Algeria’s most important export commodity. The Atlas Mountains separate the Mediterranean coast from the hot, dry Saharan desert.

In the coastal area there is a Mediterranean climate and many cliffs and mountains. In the mountainous areas the winters can be very cold. Tell- region between the coast and the desert is fertile, but small, and almost all the arable land in Algeria can be found here.

Algeria is very prone to drought and water shortages, and pollution is a major problem. Only three percent of the country’s land can be used for agriculture. Overgrazing causes the desert to spread, and to prevent desertification, the authorities started planting a “green dam” of trees in 1975.

Algeria’s location on the Mediterranean has made the country a historic trade route between Europe, Africa and the Middle East. Thus, new peoples have taken over land from the indigenous people, the Berbers. The Berbers have long struggled to preserve their culture and language tamazight.

The Arabs controlled the area from the 600s, until the Spaniards took over from 1496-1515. Algeria was then subject to the Ottoman Empire from 1515-1830, when the French invaded the country. The next hundred years under French rule have marked today’s Algeria: a third of the population died during the war against the French, both on the battlefield, from disease and hunger, while the French moved to Algeria and took the land to the people.

The local population fought for decades against the colonial power, including led by Algerian Berber emir Abd al-Qadir. The National Liberation Front (FLN) started a liberation war against France in 1954. The peace agreement was signed eight years later and Algeria became independent.

In 1991, civil war broke out in Algeria, after the government canceled the parliamentary elections because the Islamic Party Front for Islamic Salvation (FIS) was winning. When the bloody civil war ended in 2002, over 150,000 people had lost their lives.

Algeria is an authoritarian regime where the military and the ruling party dominate politics together. Elections are characterized by cheating, corruption abounds and the military cuts down on protests. Since Algeria gained independence from France in 1962, the country has been governed by one party: the National Liberation Front (FLN). Although Algeria is not a democracy, violent demonstrations led to other parties being allowed in 1989. In 1996, the country was given a new constitution, which would restrict the president from serving two five-year terms, but this rule was removed in 2008.

Political tension and violence have characterized society. Abdelaziz Bouteflika has been president since 1999, and one of his political goals is to fight radical Islam. In 2019, he said he would not stand for re-election, a sign of democratization; at the same time, he postponed the next elections indefinitely, and it is therefore uncertain whether Algeria will become more democratic.

During the Arab Spring of 2011, demonstrations erupted. As a result, the state of emergency, which had existed since the start of the civil war, was abolished.

Algeria’s most important natural resources are oil and gas, accounting for 95 percent of the country’s exports and 30 percent of gross domestic product (GDP). The state-owned oil company Sonatrach is Africa’s largest company. In addition to oil and gas, mining and industry are key parts of the economy. Algeria has large mineral resources, especially iron and zinc.

Agriculture was an important part of Algeria’s economy until the 1950s – when the country produced enough food to export. Today, the agricultural sector is underdeveloped and Algeria needs to import ¾ of the food they need instead.

Regular oil and gas discoveries have strengthened the country’s economy, which for decades was weak due to conflict and political turmoil. Foreign oil companies are very interested in Algeria’s oil resources, which is estimated to be 12 billion barrels. Algeria exports mostly to Italy, Spain and France.

Despite this, poverty is still a major problem in the country and unemployment is high, especially among young people. Widespread corruption and poor standards of public services also lead to dissatisfaction among the population.