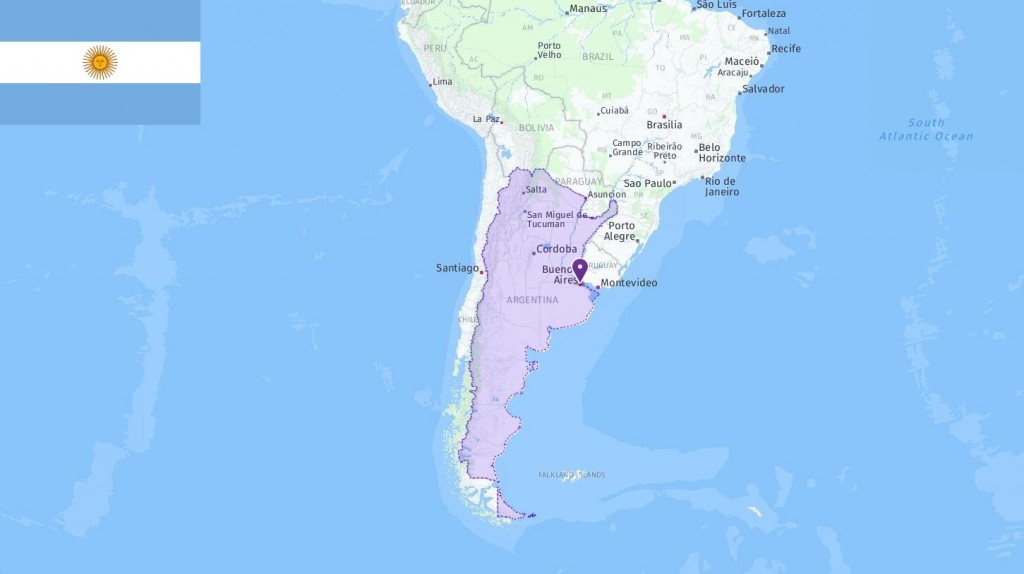 The most commonly used abbreviations about Argentina are AR which stands for Argentina and ARS which means Peso (Argentina currency). In the following table, you can see all acronyms related to Argentina, including abbreviations for airport, city, school, port, government, and etc. 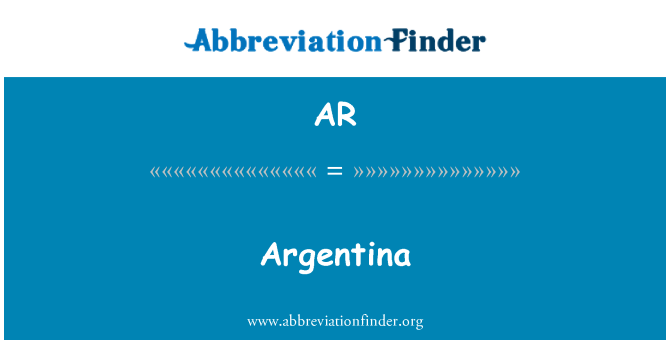 Argentina is located in South America and borders Chile in the west and south, Paraguay and Bolivia in the north and Brazil and Uruguay in the east. The country has a long coastline out to the Atlantic. Besides the Andes in the west, most of the landscape is lowland and large flat plains. The lowlands are divided into three main areas: the northern region, the pampas and Patagonia. The northern area is characterized by large grasslands, the pampas have good conditions for agriculture and livestock, while Patagonia is a plateau landscape with heights up to 1500 meters above sea level. To the north, at the border with Brazil, are the Iguazu Falls. The waterfalls are a major tourist attraction and are on UNESCO’s list of the world’s cultural and natural heritage.

Argentina extends far geographically and has a varied climate. Large parts of the country have temperate climates, but to the north there is a tropical climate while a sub-arctic climate is found in the south. Pollution and loss of agricultural land due to industrial emissions and use of pesticides are major environmental problems the country is facing. Much of the land in the country has also been destroyed due to deforestation and desertification.

The oldest traces of people in Argentina are from 11,000 years BCE. The country had Native American settlements in the north, and dispersed populations of hunters and gatherers in the south until the Spaniards colonized the country in 1516. Forced labor and diseases from Europe caused many of the country’s original population to die. The country was part of the Viceroy of Peru and the Viceroy of Rio de la Plata, before it became independent in 1816. The period after Spain’s independence was characterized by internal turmoil. There were disagreements between conservative and liberal politicians, and between politicians and the military. Between 1880 and 1910 the country was ruled by conservative politicians. Agriculture was developed and meat and grain were important commodities. Labor was needed, which opened up for immigration from Europe. With European immigrants came ideas of socialism,

In 1946, Juan Perón came to power. He improved the situation of the poor, gave women the right to vote and nationalized the industry. At the same time, he ruled with dictatorial means; resistance was suppressed and the media controlled. In 1955 Perón was overthrown by a military coup, and until 1976 the military characterized the country’s political leadership. Up to 30,000 people disappeared over the years, the military dictatorship lasted, and the country’s foreign debt increased dramatically. In 1982, Argentine troops invaded the British Falkland Islands in the southern Atlantic, but lost to British troops. The loss led to the military dictatorship’s demise and the country’s first democratic elections. The 2000s have been marked by several periods of economic downturn and great dissatisfaction among the population.

Argentina is a republic with 23 provinces, in addition to the capital Buenos Aires. It is a federal system of government with partially autonomous provinces. The President is elected every four years and can sit for a maximum of two consecutive terms. In theory, the president’s actions should be controlled by Congress, but in practice it is the president who has the power. The country’s people have little faith in the political system, much because of corruption.

Much political focus is focused on reducing the differences between poor and rich, giving the state a more important role in business, making Argentina more attractive to foreign investors and fighting the corruption that is a major problem in the country. Increased cooperation with neighboring countries is also emphasized, in this way reducing the influence of the United States in the region.

In 2017, it was estimated that about one in four Argentines lives below the poverty line and there are large differences between poor and rich. Several of the rich live in Buenos Aires and other large cities, while the poor live primarily in slums on the outskirts of cities.

A hundred years ago, Argentina was one of the world’s ten richest countries, but failed economic policies and corruption led to Argentina’s currency losing much of its value. In 2001, the country ended in economic crisis and people were not allowed to withdraw their savings from the bank. The country went bankrupt. This triggered more mass demonstrations, and more presidential changes in a short time. The economy gradually recovered, but the country took up new loans and experienced a new economic crisis in 2014 when the country failed to meet its loans. In 2018, Argentina applied for a $ 50 billion crisis loan from the International Monetary Fund (IMF). Despite the crisis loan, the value of the Argentine currency has continued to decline and inflation remains high.

Large parts of Argentina’s cultivated areas are used for agricultural production, and the industry accounts for most of the country’s exports. Argentina is one of the world’s largest exporters of beef. In addition, soy, maize, fruit, gas, oil and biodiesel are exported from the country. High international commodity prices make Argentina a profit, and in 2017 the country exported goods for a total of US $ 58.4 billion. Argentina’s main trading partners are Brazil, the United States and Chile.