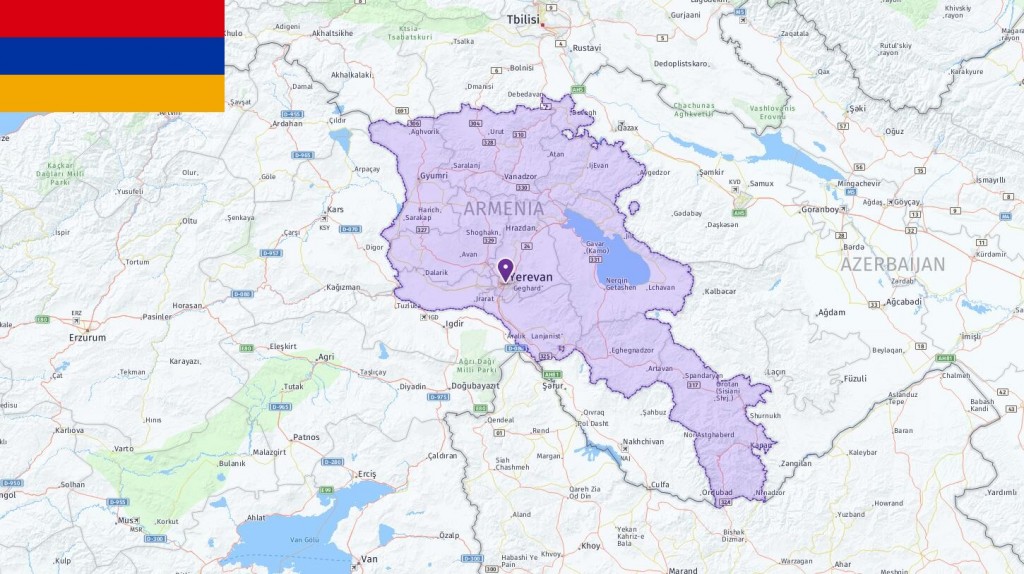 The most commonly used abbreviations about Armenia are AM which stands for Armenia and AMD which means Dram (Armenia currency). In the following table, you can see all acronyms related to Armenia, including abbreviations for airport, city, school, port, government, and etc.

Armenia is an inland state in Asia, with proximity to the Black Sea and the Caspian Sea. Armenia is located on the Armenian Plateau, which in addition to Armenia includes parts of Turkey, Azerbaijan and Iran. Most of Armenia consists of mountains, but the landscape is also characterized by lakes, desert and forest.

Armenia has a continental climate with hot summers and cold winters. There are large temperature fluctuations between day and night. Armenia is, in area, the smallest of the old Soviet republics.

The country is prone to earthquakes, which has caused much destruction. A catastrophic earthquake in 1988 killed thousands of people and caused half a million Armenians to lose their homes.

Parts of Armenia were heavily polluted by industrial emissions during the Soviet era. Many of the former factories are now closed, but much of the country’s arable land has been polluted, and destroyed, due to over-use of toxic pesticides.

Armenia is often referred to as the world’s first Christian nation, as it was one of the first in the world to introduce Christianity as state religion in the year 301. Armenia’s central location has led many different peoples to conquer the area for centuries.

Armenia was part of the Ottoman Empire from the beginning of the 16th century. Towards the end of the 19th century, the Ottoman Empire began to disintegrate. Inspired by European liberation movements, the Armenians began to demand independence. In fear of an Armenian uprising, the Istanbul government decided in 1915 for Armenians in Turkey to be deported to Syria and Mesopotamia. Turkish troops carried out mass deportation and mass murder of refugee Armenians. This is called the Armenian Genocide. Between 300,000 and 1,500,000 Armenians in the Ottoman Empire, present-day Turkey, were killed. The incident is subject to extensive controversy and discussions, especially between Turkey and Armenia. According to Turkey, the deaths were part of the suffering during the First World War, and not systematic killings.

In 1920, Armenia was incorporated into the Soviet Union, and was a sub-republic until the country became independent in 1991. The next three years were marked by war against neighboring Azerbaijan. Armenia occupied the Nagorno-Karabakh area of ​​Azerbaijan, which is mainly populated by ethnic Armenians. As a declaration of support for Azerbaijan, Turkey closed its borders against Armenia in 1993. This has made the economic development of the country considerably more difficult.

Officially, Armenia is referred to as a liberal democracy, but breaches of democratic traditions characterize the politics of the country. Several elections have been criticized for electoral fraud. Corruption is widespread, and the country’s economy is plagued by organized crime ruled by criminal groups and mafia-like organizations. Despite this, Armenia is considered one of the most democratic countries of the former Soviet republics.

Like many of the former Soviet republics, Armenia has since its independence, struggling with high emigration due to poverty and poor living conditions. Trafficking in women and illegal trafficking in male labor are also a major problem.

Armenia is a middle-income country, but faces challenges in establishing a well-functioning economy. Armenia has struggled to find alternative trade routes to replace Soviet industry. Neighboring Turkey and Azerbaijan’s trade blockade worsened the country’s economic situation. High unemployment and poverty are a major problem. About 30% of the country’s inhabitants live below the poverty line.

Armenia’s economy is heavily dependent on income from goods exports and transfers from Armenians working abroad. The country’s imports are larger than the country’s exports, which has led to a trade deficit. Today, diamonds and metals are Armenia’s most important export goods. Tourism is also a sector in development. Oil and gas are imported from Russia and Iran and these countries are Armenia’s most important trading partners.