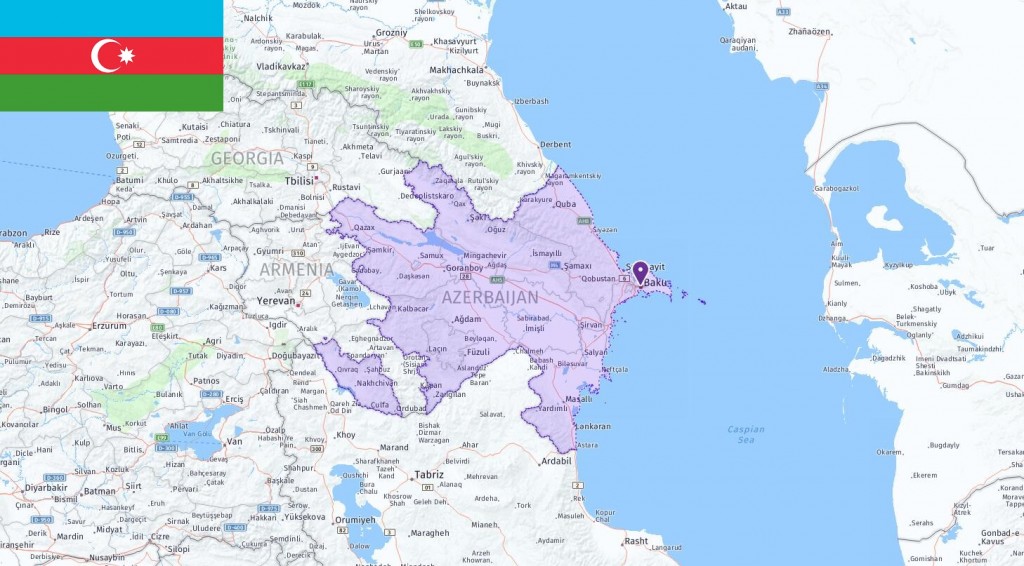 The most commonly used abbreviations about Azerbaijan are AZ which stands for Azerbaijan and AZN which means Manat (Azerbaijan currency). In the following table, you can see all acronyms related to Azerbaijan, including abbreviations for airport, city, school, port, government, and etc. 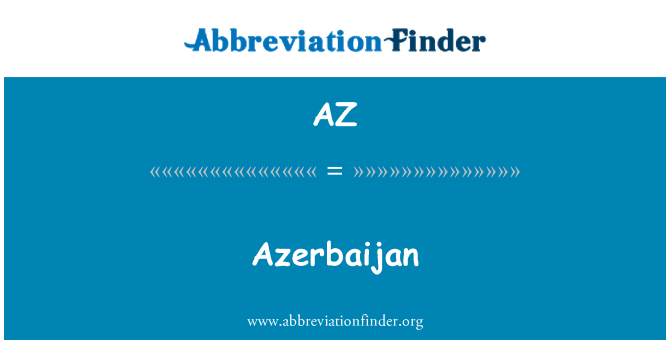 Azerbaijan is located in the South Caucasus. The Caucasus forms the border between Europe and Asia, and it is a defining question whether the country lies in Europe or Asia. Azerbaijan has a 713 kilometer long shoreline along the world’s largest lake, the Caspian Sea. The land consists of plains and high mountains, covering almost half the area.

The Caspian Sea is heavily polluted by emissions and leaks from the oil industry. Use of pesticides and artificial fertilizers in the Soviet era, combined with environmental degradation due to oil recovery, has destroyed much of the arable land in the country. The capital Baku is located in an area with major environmental damage. Azerbaijan has initiated several environmental projects, and today the size of the polluted industry is greatly reduced.

Azerbaijan’s central location between Europe, Asia and the Middle East has resulted in the area being subject to a number of different kingdoms throughout its history. The Arabs conquered the country in 642, then Persia, Russia, Ottomans and local sheriffs fought for dominion. With the Turkmenchay Treaty in 1828, Persia and Russia divided the area between them. Current Azerbaijan was incorporated into the Russian Empire. When the Russian Empire collapsed during World War I, the country declared itself independent. Independence did not last long. The Democratic Republic of Azerbaijan was conquered by the Red Army in 1920, and the same year they became subject to the Soviet Union. After the fall of the Soviet Union, Azerbaijan again became an independent state. Since the 1990s, the country has been in conflict with Armenia due to the Nagorno-Karabakh area, where the Armenian majority population wants to create an independent state.

Two years after independence, Communist leader Heydar Aliyev took power when he declared himself president. He ruled until 2003, when his son Ilham Aliyev took over the presidency. Their rule has been authoritarian and oppressive. In recent years, the government has regularly made arrests and sentenced protesters to prison sentences.

On paper, Azerbaijan is a parliamentary democracy, but in practice the country has been ruled dictatorially by the Aliyev family since 1993. In 2009, laws were introduced that allowed the president to be re-elected an unlimited number of times. The president is the commander-in-chief and commander-in-chief of the army. He also appoints the country’s judges. The political opposition is suppressed. Freedom of speech is severely limited, and regime-critical journalists and bloggers are subjected to arrests and detention. Corruption and electoral fraud are widespread. None of the elections that have occurred in modern times are accepted internationally as free and fair elections.

The war with Armenia over Nagorno-Karabakh is the biggest foreign policy challenge for Azerbaijan. Since 1994, the parties have had a ceasefire, but the conflict over the disputed area remains unresolved. According to reports, there is serious discrimination against the Armenians and other minorities living in Azerbaijan. The human rights situation is also mentioned as worrying.

Despite much poverty and difficult living conditions among the country’s population, Azerbaijan’s large oil and gas revenues have made it possible to reduce poverty. The oil has also contributed to smaller groups of newly empires, and the differences between rich and poor are enormous.

Historically, trade has played an important role in the economy of Azerbaijan. After independence, the country experienced rapid economic growth. The development of the offshore sector in the Caspian Sea has been a major economic driver for the country. Azerbaijan’s most important natural resources are gas, iron ore and oil. The war against Armenia weakened the country’s economy and international trade. However, in the years following the ceasefire, the economy slowly began to grow.

Corruption permeates society and is a major problem in the country. Another challenge for the country is that economic growth is entirely dependent on the oil and gas sector. This makes the country vulnerable to fluctuations in international oil prices. A sharp fall in oil prices in 2015 affected the country’s economy. Prices in the country rose, which in turn led to major protests where police met several of the protesters with tear gas and arrests. It is uncertain how long the oil reserves will last. The authorities have therefore established an oil fund, to save income for future generations.