Baku, Azerbaijani Bakı, capital and most important industrial city of Azerbaijan, 13 m below sea level, in the middle of the oil production area on the south bank of the Apsheron peninsula in the Caspian Sea , (2015) 1.2 million residents, the administrative administrative region Baku has an area of ​​2 130 km 2 , around 2.2 million people live in the greater Baku area.

Baku became an early center of industrialization and urbanization in Transcaucasia due to the oil production that began in the area in 1871. At the end of the 19th century Baku was the world’s most important center of the oil industry, in 1947 the production activities were expanded to the offshore area of ​​the Caspian Sea. Oil production and processing as well as the related industries (petrochemicals, machine and plant construction for oil production, shipbuilding) and services continue to determine the economic structure of the industrial agglomeration around Baku and Sumgait. The region around Baku and the adjacent coastal zone of the Caspian Sea are widely contaminated by residues from oil production, and the ecosystems are seriously damaged.

Baku is one of the most important ports on the Caspian Sea with ferry connections to Aktau (Kazakhstan) and Bender Ansali (Iran) and railway ferry to Turkmenbashi (Turkmenistan), which connects the Transcaucasian (of Batumi and Tbilisi) with the Trans-Caspian railway. Inner-city traffic has been relieved by a subway since 1967. Oil pipelines exist from Baku via Dagestan to the Russian Black Sea port of Novorossisk, to Supsa in Georgia and via Georgia to the Turkish Mediterranean port of Ceyhan. Baku is also a transshipment point for Turkmen oil, which is transported by tankers across the Cape Sea. The international airport in the east is the main airport in Azerbaijan.

In the old town of Baku, surrounded by a city wall with towers (13th century), there are numerous medieval buildings (including Synyk Kala minaret, 1078/79; Kys Kalassy tower, so-called Maiden’s Tower, 12th century). In the center of the great Khan Palace (14th – 15th centuries; museum) the “Council of Khans”. The Türbe, burial place of the khans of Shirvan, was built around 1435. The walled old town has been a UNESCO World Heritage Site since 2000. In the bay of Baku there is a sunken fort (around 1235). The residential and industrial districts adjoin the old town along the bay.

Baku, first mentioned in the 5th century, became the residence of the Khans of Shirvan in the 12th century. In 1501 the Safavid troops under Ismail conquered the city; it became Turkish in the 1880s and Persian again in 1604. 1723 by Peter the Great conquered, returned to Persia in 1735, Baku fell again to Russia in 1806. Since the 1870s, the exploitation of the oil fields around Baku, which has been known since ancient times, with the participation of foreign capital (Nobel, Rothschild), led to the city’s rapid economic growth. The multiethnic population of this Caucasian industrial center grew rapidly (from 8,374 residents in 1857 to 14,577 residents in 1874, 206,000 residents in 1902 and 775,000 residents in 1939); In addition to social tensions (important role played by Baku’s industrial workers in the revolutions of 1905 and 1917), strong national differences developed here (especially between Azeri and Armenians, who fought bloody disputes between 1905-06 and 1918; pogrom against the Armenians in September 1918). After the October Revolution, the “Baku Commune” was founded by the Bolsheviks in April 1918, but it was only able to last a few months (shooting of the 26 Baku commissioners in September 1918). In 1918 British and Turkish troops occupied the city, which was the seat of the Azerbaijani Mousavad government from September 1918 to April 1920. After the city was captured by the Red Army, Baku became the capital of the newly established Azerbaijani Soviet Socialist Republic in 1920. During the Second World War Baku was one of the strategic goals of the German troops, but was not reached by them.

In connection with the conflict over Nagorno-Karabakh that broke out in 1988, there were repeated (including in January 1990) bloody riots against the Armenians living in Baku, who were subsequently evacuated. At the end of the 1980s Baku developed into the center of the Azerbaijani independence movement (1989 establishment of the »Popular Front«); a Soviet military intervention in the city in January 1990 killed around 170 people. In 1991, the independence of Azerbaijan was proclaimed in Baku. 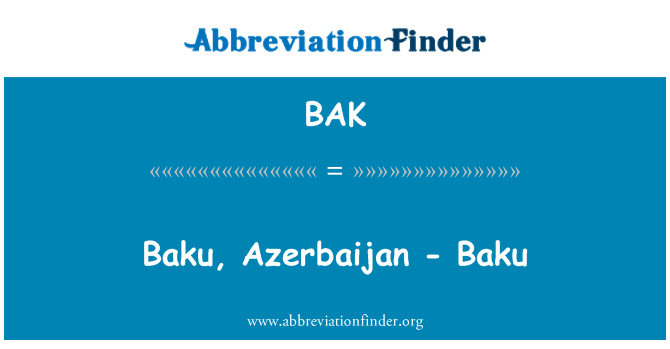