NSFW is an abbreviation of the English term “Not Safe for Work”. It is a slang used on the Internet as an alert for content that is inappropriate for viewing in public places or in the workplace (for example, pornographic content). 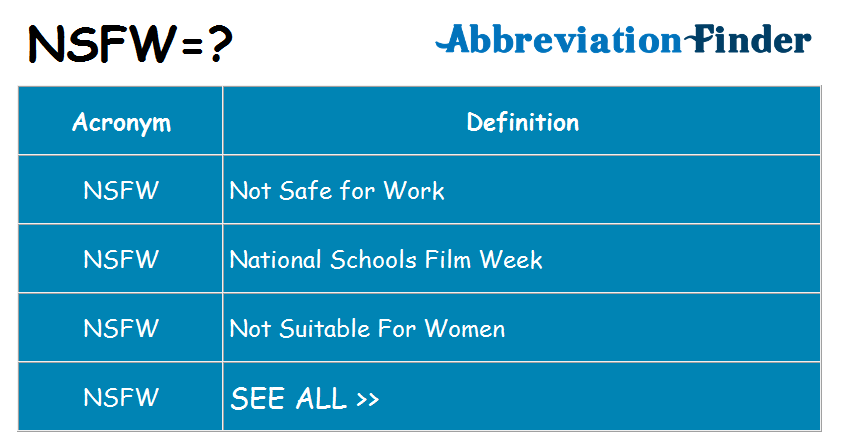 The abbreviation NSFW can be found together with emails, images, videos or other files with inappropriate content where caution is recommended by the user when opening the file. There are cases of people who have been fired from the company for viewing content of a sexual nature in the workplace. The NSFW slang prevents a person from opening a particular inappropriate link, being hampered in their work or causing an inconvenient situation in a public place.

The concept of SFW or NSFW (safe or unsafe for work) is relative, because it depends on the work environment and freedom conferred by the employer of each worker. There are sites that work as tools that determine if a certain content is SFW or NSFW.

There are other similar abbreviations that are used for the same alert type:

On the contrary, the abbreviation SFW “Safe for Work” means “Insurance for Work” and is used to designate a file that can be opened and seen in public without any fear.

Other Meanings of NSFW

Meaning of UVA and UVB

What are UVA and UVB? UV is the acronym for ultraviolet, which is a type of electromagnetic radiation. Thus, UVA, UVB and UVC are different types of ultraviolet rays and are transmitted from the Sun.