OCD (Obsessive Compulsive Disorder) is a psychiatric disorder caused by compulsive thoughts that generate anxiety causing discomfort or suffering in the individual. The obsession for hygiene is usually referred to as OCD; symmetry; perfectionism; “manias” or “rituals”. 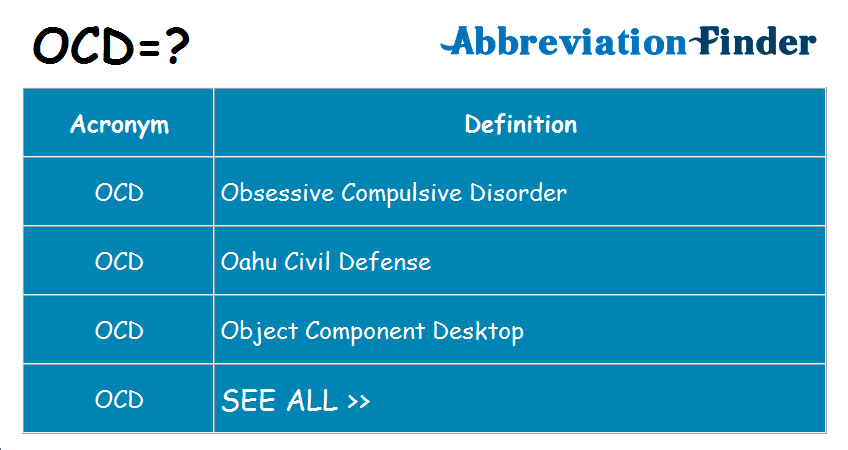 The OCD can be manifested in many ways, and in some cases are more serious and others may be less noticeable. This type of disorder plagues thousands of people around the world.

OCD can be identified if the individual is concerned at all times with dirt, washing their hands several times throughout the day or discomfort if the objects are not symmetrically positioned.

It is defined as Subclinical OCD, in case there are some “rituals” or obsessions that repeat with some regularity, but that do not go to disrupt the social life of the individual.

This disorder may prevent an individual from performing their work and from interacting in a social context.

There are many uncertainties regarding the causes of OCD, and some causes have not yet been scientifically proven. The most common cause is genetics, when someone in the family suffers or has suffered from this type of disorder, it is common to check other people with the same disorder or similar. Studies point to a multifactorial anomaly due to a communication problem in some areas of the brain linked to serotonin.

As many causes of OCD are unknown, it is not possible to speak of a definitive cure for this disorder. However, there are treatments that can alleviate your symptoms.

OCD is a disorder that develops in an individual’s behavior and may be mild, moderate, or severe. A person does not get better without treatment, and as the disorder manifests in different ways in each person, treatments can also vary. Some psychiatrists claim that behavioral therapy, cognitive-behavioral therapy, and some medications are first-line treatments for OCD.

Other Meanings of OCD

Abscess is a concept that comes from the Latin word abscessus. In turn we would have to make it clear that this word emanates, etymologically speaking, from the verb “abscedere” which is made up of two parts: the prefix “abs-“, which can be translated as an indicator of separation, and the word “cedere”, which is equivalent to “go”. […]

Overwhelmed is a concept that derives from overwhelming. This verb alludes to grieving, distressing or lowering. The subject who is overwhelmed is therefore overwhelmed, exhausted, or oppressed. For example: “I am overwhelmed with so many problems, I would need a vacation urgently”, “Overwhelmed, the economy minister submitted his resignation”, “I don’t like my son being overwhelmed by obligations: he’s a child and he must have […]