SQL is the acronym for “Structured Query Language”, a standard language of data management that interacts with the main databases based on the relational model.

Some of the major systems that use SQL are: MySQL, Oracle, Firebird, Microsoft Access, PostgreSQL (open source), HSQLDB (open source and written in Java). 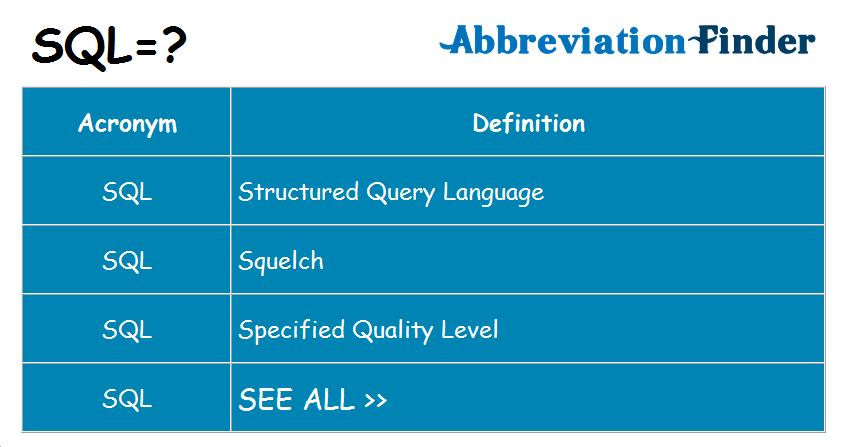 The SQL language emerged in 1974 and was developed in IBM Labs as an interface to the Relational Database Management System (RDBMS) called SYSTEM R. This system was created based on a 1970 article written by Edgar F. Codd.

Other languages ​​of the genre have emerged, but SQL has become the most widely used. The creation of a standard for SQL was performed in 1986 by the American National Standard Institute (ANSI) and in 1987 by the International Organization for Standards (ISO).

SQL is an essentially declarative language. This means that the programmer only needs to indicate what the intended purpose is for the RDBMS to execute.

Some of the key SQL commanding for data manipulation are: INSERT, SELECT, UPDATE, DELETE. SQL also enables the creation of relationships between tables and control of access to data.

Other Meanings of SQL

Introduction In the article Processors – Part 1, the most basic concepts of a processor were discussed, such as clock, Front Side Bus (FSB) and cache memory. In this second part, you will learn about other concepts related to processors, such as miniaturization are taking and encapsulation. However, the most important thing is that you you will also find the answer to a very common question: as the processors […]

Introduction The use of mobile devices grows every day and this is making the memory cards are increasingly used. These devices have a certain storage capacity of data and are used for storing and transporting files from cameras digital, audio players, smartphones, etc. This article will quickly the types of card more known and the technology used in them, the Flash memory. […]

Listen to music on the computer (or mobile digital devices) it is something that has become routine for a lot of people. In large part, the responsible for this is audio format MP3, which is so popular, it is already running in readers DVD, stereos and even cell phones. However, the MP3 format is patented and that was enough for that technology alternatives […]