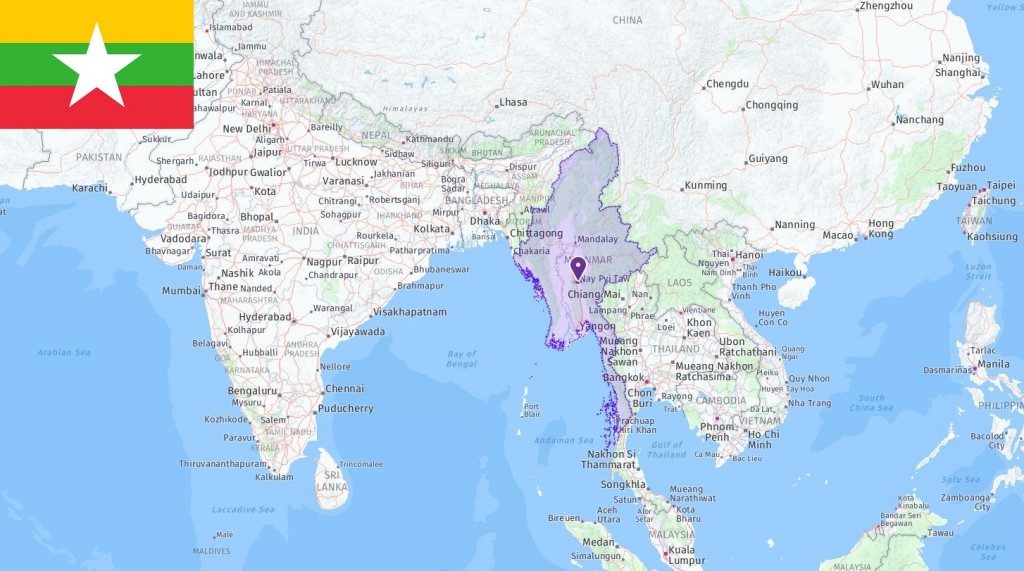 The most commonly used abbreviations about Burma are MM which stands for Burma and MMK which means Kyat (Burma currency). In the following table, you can see all acronyms related to Burma, including abbreviations for airport, city, school, port, government, and etc. 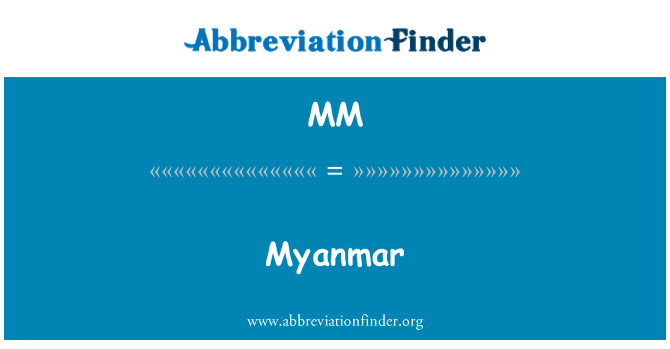 Myanmar can be divided into three geographical regions: the mountain ranges to the west, the central plains in the middle of the country and the high Shan plateau to the east. The many mountain ranges are continuations of the Himalayas, and cut through the country throughout its length. Between the mountains lie a plethora of deep, elongated valleys. More than half of the country is covered by dense forests, and coastal areas are dominated by rich, fertile soil. The climate is tropical, with large variations between seasons and much rainfall during the rainy season. There are high average temperatures throughout the country, but with a certain difference between the south and the cooler northern regions.

Emissions from industry do not pose a major problem, but deforestation and emissions from oil recovery are an increasing challenge. The development of power plants has destroyed large areas and is a threat to both humans and animals. Damming water to make electricity has forced thousands of people to relocate. In 2008, the country was hit by cyclone Nargis, which killed 138,000 people and left tens of thousands homeless.

The area has long been inhabited by various groups of people. The Burmese have been the dominant group of people since the 9th century. They have three times managed to unite Myanmar into one kingdom, for the first time in the 1000s. The British Empire expanded in Southeast Asia in the early 1800s, and Myanmar became part of British India in 1886. Myanmar became independent in 1948, but communist, Chinese and ethnic guerrilla groups worked against the fresh government, which was deposed in a military coup in 1962.

The military junta took over ownership of all the companies in the country. The economy crashed and a large black economy developed. In order to curb the dissatisfaction of the population, the military introduced a new constitution, declaring that the country should switch to civilian rule. Myanmar got a civilian government in 1974, but only on paper.

Myanmar is a federal state. In 2008, the country was given a new constitution, which paved the way for the transition to civilian rule. A system was introduced in which the president is head of state and elected by parliament. The Constitution contains some special provisions: The military gains a lot of power and has reserved 25 per cent of seats in parliament. In practice, this gives them a veto on constitutional amendments. Persons with foreign spouses cannot become presidents, a provision that excludes Aung San Suu Kyi.

After 2011, major political upheavals took place in Myanmar. The military junta was dissolved, and a number of democratic reforms were introduced, which included, among other things, that Aung San Suu Kyi could participate in politics after decades of house arrest. The country is undergoing a gradual change towards increased democracy. In 2015, the opposition won a major victory in the parliamentary elections, and although Aung San Suu Kyi cannot become president, she is the government’s real leader.

The Burmese have dominated Myanmarian politics since independence. This has created several long-standing armed conflicts with the other ethnic groups in the country, but most have signed peace agreements since 2011. In addition, the Muslim part of the population is suppressed by the Buddhist majority. The Muslim people group, the Rohingya, are not granted citizenship, and the UN describes them as one of the world’s most persecuted groups. In the fall of 2017, violence escalated. The military burned down several villages and the Muslim Rohingya minority was run away. The actions of the military were condemned by the international community, and called for ethnic cleansing. Criticism was also directed at Aung San Suu Kyi for not renouncing the abuses. 600,000 refugees are out of the country waiting to return home.

Myanmar is rich in resources and has very good soils, deposits of oil and large areas suitable for forestry. However, these resources are poorly utilized. Decades of economic mismanagement, sanctions and tourist boycotts have made the country among the world’s poorest. The road network and infrastructure are almost undeveloped, making it difficult to operate an industry. Agriculture and forestry, fishing, mining and energy recovery are important sources of income in Myanmar’s official economy. In addition, the country has a large black economy – about as large as the official section. Here, smuggling of gems, tropical timber and opium are important sources of income.

The government has implemented a number of economic reforms as part of the democratization process. The state will interfere less in the economy, state companies will be privatized and foreign investment allowed. The World Bank and other international donors have opened up to provide assistance and loans to Myanmar. In addition, the country has been cleared of its foreign debt. China is and has been Myanmar’s most important trading partner – even when other countries boycotted the country. Reforms and the lifting of international sanctions lead to greater economic growth in the country.