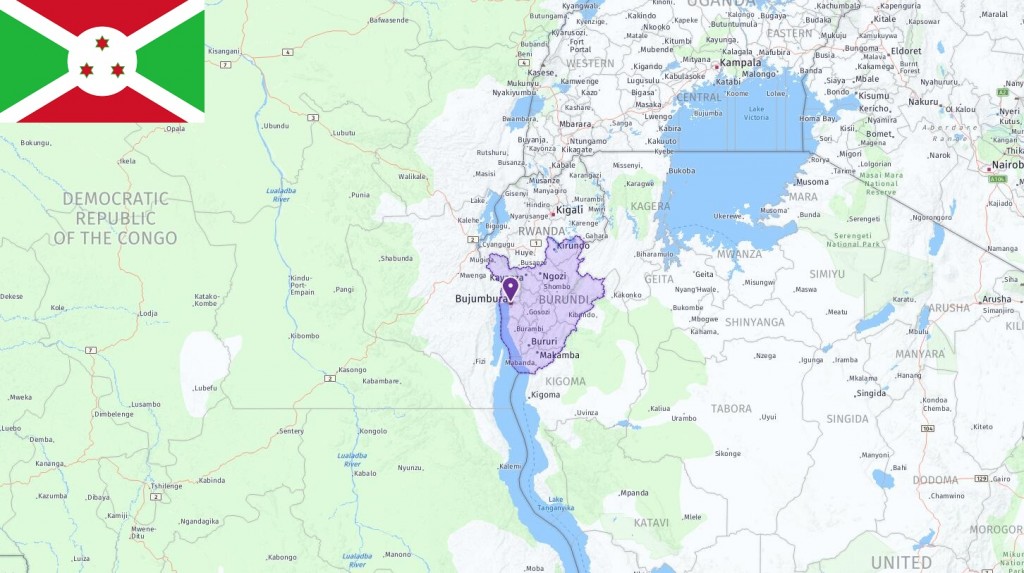 The most commonly used abbreviations about Burundi are BI which stands for Burundi and BIF which means Burundian franc (Burundi currency). In the following table, you can see all acronyms related to Burundi, including abbreviations for airport, city, school, port, government, and etc. 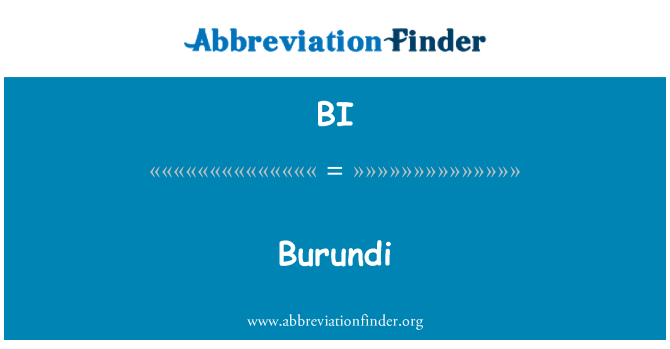 Burundi is situated on the African high plateau and is part of the Rift Valley. Large parts of the country are between 1500 and 2000 meters above sea level. To the south is the border with Africa’s longest and deepest lake, Lake Tanganyika.

Burundi is one of Africa’s most densely populated countries. There is too little arable land divided by the number of people, which has led to overgrazing and depletion of the soil and that much of the country’s green plants and plants have disappeared. Today, most of the landscape is man-made savanna.

Burundi struggles with soil erosion and deforestation. The small amount of forest left in the country is constantly under pressure, and tropical rainforest is only found in the lowlands in the west. Burundi has a tropical climate, but in the higher parts of the country temperatures are lower. The country forms the watershed between the Nile and Congo river systems.

In Burundi, 85 percent of the population belongs to the ethnic group of Hutus, while 14 percent are Tutsis. Ethnicity was not particularly emphasized until the Germans and Belgians colonized the country towards the end of the 19th century. The colonial powers favored the Tutsis and strengthened their own position by putting different groups of people against each other.

After independence in 1962, the Tutsis controlled the army and eventually took power. The Hutu organized themselves into various resistance groups and finally managed to make the country’s first democratic elections in 1993. In this election, the Hutu Melchior Ndadaye was elected president. However, he was assassinated shortly afterwards, triggering an avalanche of acts of violence against civilian Tutsis. The Tutsi responded by killing hundreds of thousands of Hutus. The civil war that followed lasted from 1994 to 2005. Around 700,000 hutus fled to Tanzania as a result of the civil war. After the civil war, Burundi has moved towards political stability, and in May 2008, the government and the last active rebel group, the FNL, agreed to enter into a ceasefire. The authorities and the UN have been working to disarm thousands of soldiers and former rebels, as well as founding a new national army.

In 2005, a new constitution came with the goal of outlining a fair distribution of power between Hutu and Tutsid dominated groups. The previous constitution of 1962 had favored the Tutsis. Pierre Nkurunziza (hutu), was elected president the same year that the Constitution came into force. There was unrest when Nkurunziza ran for election for a third term, winning in 2015. Since the election, there has been fear of a new civil war and new massacres in Burundi.

The new Constitution of 2005 states that the president and the two vice presidents should have different ethnic origins. In the government and the National Assembly, 60 per cent of Hutus and 40 per cent of Tutsis should be present. Three seats in the National Assembly shall also be reserved for representatives of the country’s indigenous peoples, twee, which constitute one percent of the population. 30 per cent of the government should consist of women. According to the new law, no ethnic group should make up more than 50 percent of the army.

Most Burundians depend on the family and the village for social security. The civil war led to terrible living conditions for the people. Over half live in extreme poverty, and two out of three are considered malnourished. Strong population growth in addition to the return of people who escaped during the war has led to many conflicts around grazing areas. A number of diseases are common, such as malaria and tuberculosis. Burundi is also severely affected by the AIDS epidemic. The UN estimates that around 120,000 children are orphans as a result of the disease.

Burundi struggles with the fact that the landscape is difficult to access, that the infrastructure is poorly developed and that the goods must be transported over long distances. It is far from the agricultural areas to the ports along Lake Tanganyika. In recent years, the country has been hit by drought and flooding, which has damaged both crops and infrastructure.