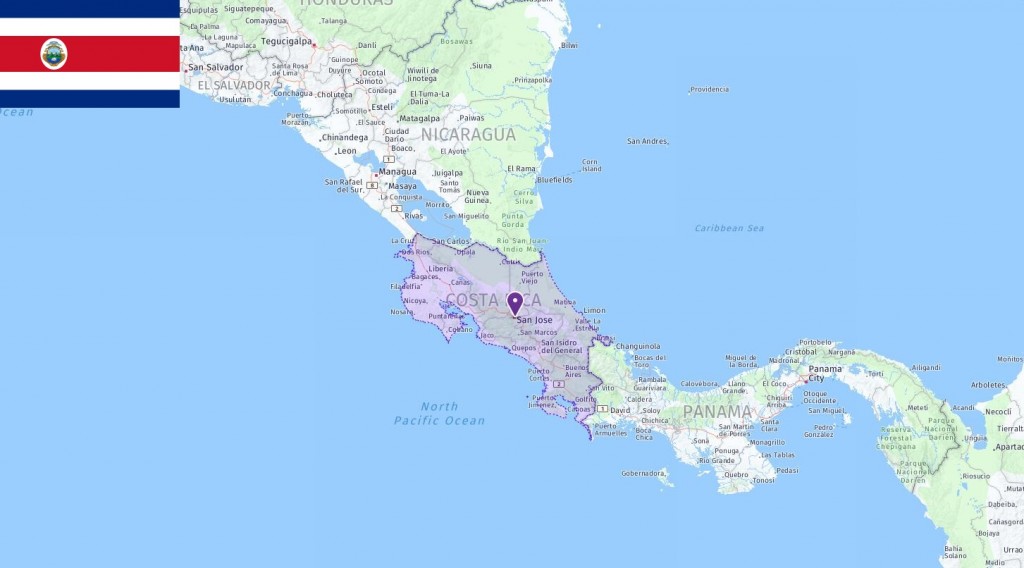 The most commonly used abbreviations about Costa Rica are CR which stands for Costa Rica and CRC which means Costa Rican colón (Costa Rica currency). In the following table, you can see all acronyms related to Costa Rica, including abbreviations for airport, city, school, port, government, and etc. 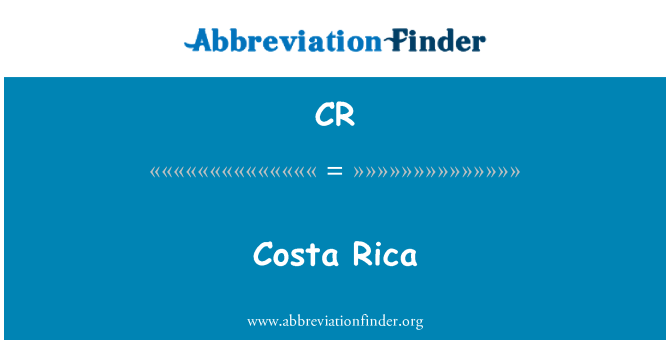 Costa Rica is located in Central America, between Nicaragua in the north and Panama in the southeast. The country has a coastline to the Pacific in the west and the Caribbean in the east. Costa Rica also includes the island of Isla del Coco in the Pacific, which is located approx. 550 km from the coast. Costa Rica’s central part consists of a mountainous area that divides the country into a western and an eastern part. In this mountain system lies the country’s highest point, Cerro Chirripo, which is 3819 meters high. There is a huge diversity of animals in the country, and around a quarter of the country’s area is protected areas.

There are two seasons in Costa Rica: a rainy season, from May to November, and a drying season, from December to April. Costa Rica is prone to volcanic eruptions and earthquakes. The country’s biggest environmental problems are soil erosion and air pollution.

Before Kristoffer Columbus arrived in Costa Rica as the first European in 1502, Mayans and Chibchas lived in the country. Europeans were little interested in the country in the beginning, and European settlement therefore began only 20 years later. The country became a Spanish colony and the indigenous people, the Indians, were displaced or died of diseases brought by Europeans.

Because Costa Rica was far from the colonial capital of Guatemala, the area developed a community of Spanish small farmers with their own identity and with greater financial equality than in other parts of Latin America. In the mid-1800s, coffee and bananas evolved to become the country’s most important economic foundation. The country became independent from Spain in 1821. Costa Rica was a member of the Central American Federal Republic until 1838, when the country became a separate republic.

Since the 19th century, there have been only two periods of instability in the country. First in 1917 to 1919 when Federico Tinoco ruled as dictator, and later in 1948 when a 44-day civil warbroke out as a result of a disputed presidential election. In 1949, Costa Rica abolished the military. José Figueres Ferrer founded the Social Democratic Party National Liberation Party (PLN). Ferrers party will dominate politics for the next decades. By then his predecessor Guardia had already introduced a strong social policy in the country. With the support of communists, trade unions and the Catholic Church, the foundation of what has become the Costa Rican welfare state was laid. Under Ferrer, the right to vote was extended to both women and blacks. The banks were subject to the state, wealth tax was introduced, the farmers received state support, and the most important social tasks were to be solved by state companies.

In 2001, a wall was built along the border with neighboring Nicaragua, which has led to major disagreements between the two countries.

Costa Rica has the best social welfare schemes and the best living conditions in Central America. The country is also one of the region’s most stable countries, with a long democratic tradition. Costa Rica has universal suffrage and the country’s president and national assembly are elected for four years at a time. The country has been characterized by two parties, but in recent decades this has been challenged by several candidates. In addition, the country was shaken by a corruption scandal in 2004 where two former presidents were convicted.

Despite the country’s welfare, there are big differences between rich and poor. Economic growth in the country has largely benefited the rich. Today, every fifth Costa Rican is considered poor. It is an institutionalized and effective protection of human rights in the country.

Legal and illegal immigrants from Nicaragua are increasingly coming to Costa Rica as low-wage workers. This is a challenge for the well-developed welfare system in the country. Organized crime and drug trafficking also pose greater and greater societal problems in the country, as the country is transit country from South America and north.

Costa Rica has traditionally been an agricultural country. Growing coffee, bananas, pineapple, sugar cane, cocoa, rice, corn, potatoes and beans has throughout history been the most important sources of income.

Today, tourism is also a significant industry in the country, and the country is one of the foremost destinations in the world. A downturn in the economy shook Costa Rica at the end of the 1990s, but after the turn of the millennium, the country’s economy has started to grow again. The government’s desire to strengthen high-tech companies, to increase exports, is one of the reasons behind the growth. The country is struggling with a budget deficit from the time of the financial crisis in 2008, which unfortunately seems to be growing.