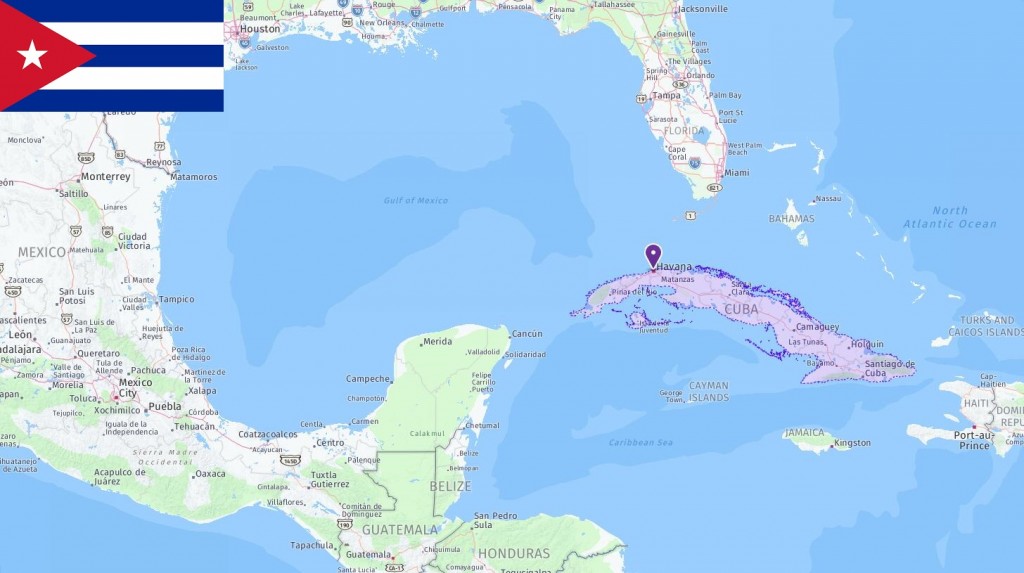 The most commonly used abbreviations about Cuba are CU which stands for Cuba and CUP which means Peso (Cuba currency). In the following table, you can see all acronyms related to Cuba, including abbreviations for airport, city, school, port, government, and etc. 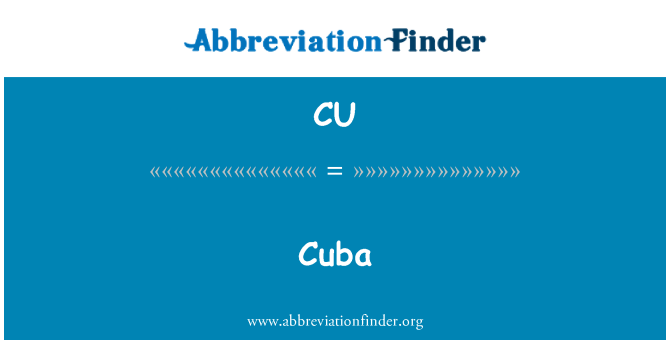 Cuba is an island state in the Caribbean. The country consists of the main island of Cuba, the smaller island of Isla de la Juventud, as well as over 1000 smaller islands and islets. The island’s coast consists of bays, sandy beaches, cliffs and coral reefs. The hinterland consists mostly of plain landscapes and low altitudes. The western part of the island is characterized by flat terrain, while to the east there are low hills and mountains. The country’s highest peak, Pico Turquino, is 1974 meters above sea level. The soil is fertile and most of it is used for agriculture. The climate is tropical, with hot, humid summers and mild, dry winters. It is rainy season from May to October.

The country is regularly exposed to heavy tropical hurricanes in the months of June to October. The hurricanes can cause enormous havoc, especially affecting the eastern part of the island most severely. The country also has a major problem with deforestation. Almost all of the original forest has been cut down. Several programs have been launched to conserve and plant new forest.

Cuba was inhabited for over 4,000 years before Kristoffer Columbus, as the first European, discovered the island in 1492. The indigenous people consisted of the three peoples groups taino, siboney and guanahatabey. When Spain began colonization of the island in the 16th century, almost all the indigenous people were exterminated, and little of their culture and language has been preserved. The Spaniards established plantations and brought many African slaves to the island as labor. In 1898, the United States supported the Cuban independence struggle against Spain, but occupied the island shortly thereafter. The United States ruled Cuba until independence in 1902. As part of the Declaration of Independence, the United States forced through a constitutional annex where they gained great influence over the Cuban economy and foreign policy.

In the years following independence, the country was ruled by alternating democratic and corrupt regimes. In 1959, Fidel Castro seized power through an armed revolution, turning the country into a one-party communist state. This led to conflict with the United States, which supported, among other things, a failed coup in 1961. In 1962, the Soviet Union began building military facilities on the island, leading to confrontation between the superpowers and the world nearing a nuclear war, (the Cuban crisis). Following this incident, the United States introduced a severe trade blockade. After more than 50 years of sanctions, the United States declared in 2014 that the country would work to normalize relations with Cuba.

Cuba is a one-party socialist state where only the Communist Party is allowed. The National Assembly is the country’s highest body, but in practice is subject to the Communist Party. The Communist Party decides to adopt the National Assembly. President Fidel Castro ruled Cuba from 1959, but in 2006 handed over power to his brother Raúl Castro. Raúl Castro carried out several reforms, and decided that politicians can only sit for two periods. Raul Castro resigned in 2018, handing over power to Miguel Diaz Canel. After more than 50 years without diplomatic relations with the United States, the countries opened new talks in 2015. The US trade blockade was softened and the countries’ embassies were reopened. The softening process has stopped somewhat since then, but the relationship is less tense than before.

Cuba is criticized for being undemocratic, corrupt and totalitarian. The country violates human rights by imprisoning and executing political opponents. The press and the internet are monitored and controlled by the state, and criticism of the state can result in severe fines, imprisonment or execution.

The country has a well-developed welfare system with toll-free health sector, maternity leave, pensions and free education. Women are equal men, and the sexes usually earn the same amount. Ethnic and sexual minorities are protected by strict anti-discrimination laws.

Cuba has a state-controlled planning economy. The country was previously dependent on assistance and cheap oil supplies from the Soviet Union. The Soviet Union also subsidized Cuba’s sugar industry, which was the country’s most important industry. After the fall of the Soviet Union, Cuban sugar production has dropped significantly. Tourism, nickel and tobacco have become new important sources of income.

The state has a food rationing system, where everyone has the right to buy basic goods at a low price. The system works poorly and usually does not meet the monthly need. The liberalization of the economy in recent years has put more pressure on the system. The richest have the opportunity to buy extra food, which pushes up food prices. This has made it more difficult for the poor to buy the necessary food next to the insufficient monthly rations.