What is the abbreviation for Delaware state? The state of Delaware is located in the northeastern United States and is therefore one of the east coast states. Delaware borders Pennsylvania to the north, New Jersey to the northeast, Delaware Bay and the Atlantic Ocean to the east, and Maryland to the south and west. The state was named after the second governor of the former Virginia colony, Thomas West. This led to the title “Lord De La Warr” and was thus the namesake of the later state and the Delaware River.

Delaware was incorporated into the Union as the 1st state on December 1, 1787, by signing the Constitution of the United States of America. Hence the nickname “The First State”. Delaware now has a highly developed industry and is best known for its research in the field of chemistry. Delaware, with the highest gross domestic product per capita, is the most economically successful state in the United States. However, this is also due to the low tax burden on the state, which also attracts numerous letterbox companies. Delaware is considered a tax haven in which it is possible to start companies completely anonymously.

Due to the coastal location and small size of Delaware, the state’s topography is relatively flat. Only the northern part is a little more hilly and belongs to the region of the Appalachian Piedmont. Delaware is not a state with top attractions in the classic sense. Delaware has no national parks, no national beaches, no national battlefields and just a national monument. However, there are many historic buildings and structures here, and visitors to the state can immerse themselves not only in the history of Delaware, but throughout the United States.

Dover
The city of Dover is located in the center of Delaware and, with approximately 36,000 inhabitants, is the second largest city in the state and the capital of Delaware. Dover was founded in 1683 by William Penn, the founder of the state of Pennsylvania. In 1777, the capital of Delaware was relocated from Newcastle. Due to their age, there are many historical buildings in the city. Dover has excellent cultural offerings with the Delaware State Museum and the Sewell C. Biggs Museum of American Art. The Dover International Speedway is available for sports lovers. Of course, the city offers more, but these are rather smaller attractions.

Wilmington
The city of Wilmington is the largest city in the state of Delaware with approximately 70,000 inhabitants in the actual urban area. In the metropolitan area, Wilmington belongs to the metropolitan area of ​​Philadelphia (Pennsylvania), about 5.83 million people live. The city has been inhabited by Swedish settlers since 1638 and belonged to the Neuschweden colony, which existed from 1638 to 1655. This Swedish episode can still be recognized well on the city’s flag. Wilmington is Delaware’s economic center, which is also suggested by its nicknames such as “Chemical Capital of the World”, “Corporate Capital of the World” and “Credit Card Capital of the World”. This is due to the tax benefits and the associated settlements of large and credit card companies.
If you are in Wilmington, a visit to the Delaware Art Museum is a must, but other attractions such as state parks, theaters, churches or the riverfront are also worth knowing.

Newark
The city of Newark in the far northwest of Delaware has approximately 32,000 residents, making it the third largest city in the state. The city was founded in 1694 by Scottish and Welsh immigrants. Newark is home to the University of Delaware, the largest in the state. There are some sights on the university campus.

The most commonly used abbreviations about Delaware are DE which stands for Delaware. In the following table, you can see all acronyms related to Delaware, including abbreviations for airport, city, school, port, government, and etc. 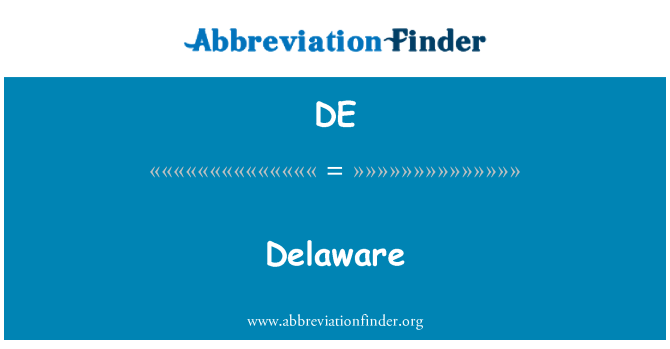