Democratic Republic of the Congo Abbreviations 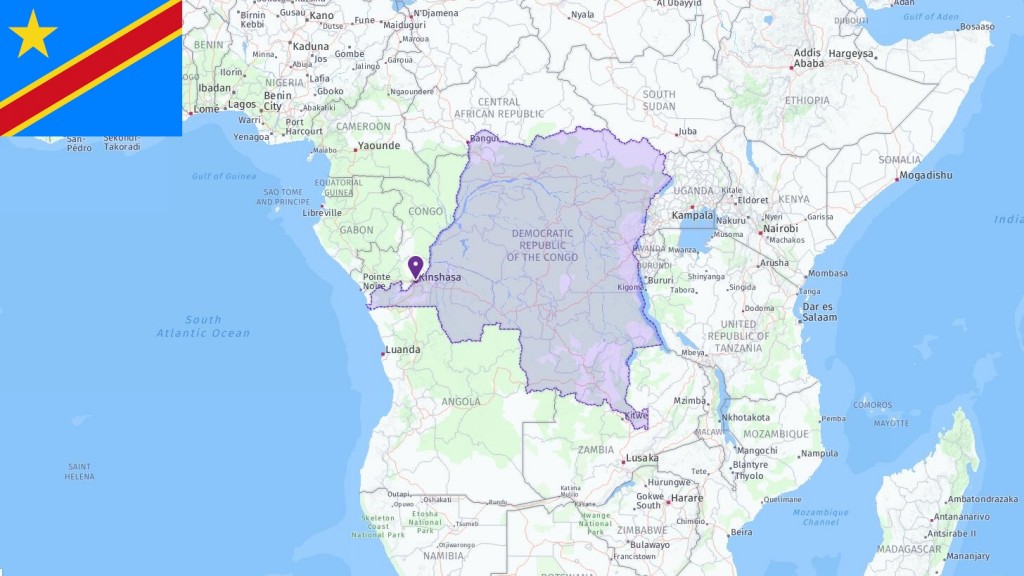 DR Congo is the second largest country in Africa. The country occupies much of Africa’s inland, and has a short coastline at the mouth of the Congo River into the Atlantic Ocean to the west. The vast Congo River flows throughout the country and is the source of all other rivers in the country. DR Congo is composed of jungle along the equator in the middle of the country, high plateaus along the Rift Valley, savannahs in the southern parts and dense grassy steppes to the north. The country experiences frequent thunderstorms and has the world’s second largest rainforest.

The climate is tropical with high humidity and a relatively high temperature all year round. The two-thirds of the country south of the equator has rainy season between November and March, while there is drying time north of the equator. The central areas along the equator have smaller differences between seasons. There are large local variations and some areas have double periods of rainy season and dry season. The biggest environmental problems are related to contaminated drinking water and deforestation due to poorly developed infrastructure and dependence on wood for fuel.

More than 2,000 years ago, several peoples groups began to settle in DR Congo, and from the 1300s, more state formation emerged. In 1482, Portuguese arrived DR Congo as the first Europeans, and European exploitation of the population and natural resources of the country began. In 1878, King Leopold II of Belgium sent American Stanley to further explore Congo, set up trade stations and meet local chieftains. Throughout the 19th century, thousands of people were trapped as slaves, and the local kingdoms collapsed as human and mineral trade grew.

In 1884, King Leopold II took over DR Congo as his personal property, and seized enormous wealth through brutal exploitation. Between five and ten million people lost their lives as a result of King Leopold’s rule during the colonial era. When the atrocities were revealed, the king had to surrender control to the Belgian parliament. This happened in 1908, and the country was named Belgian Congo. Belgian Congo became independent in 1960.

In 1965, General Joseph Mobuto seized power, renamed Mobuto Sese Seko, and renamed the country to Zaire. He established an oppressive dictatorship, and the country evolved into a kleptocracy where the president and his loved ones robbed large parts of the country’s values. In 1996, there started a revolt against Sese Seko, which ended in 1997 he was deposed by coup d’etat. The change of power triggered a new and larger war in which eight African countries and over 25 armed groups fought. Millions of people lost their lives in the war, which was formally ended in 2003. Local wars and conflicts still characterize DR Congo.

DR Congo is a republic led by a president. The president is head of state and is elected for five-year terms. The Prime Minister and the government are elected by the President on the recommendation of the majority in the National Assembly. Parliament is elected for four years at a time, and consists of a National Assembly and a Senate. The prime minister and the president share the executive power, and the legislative power resides in parliament. Today there are around 450 registered political parties in the country, the majority of whom have an ethnic or regional identity. Often the parties are built around strong leaders.

DR Congo is characterized by unrest and a number of groups are waging war against each other, especially in the east of the country. A weak and corrupt state apparatus and poorly developed infrastructure make it difficult to keep control. The UN force MONUSCO cooperates with the government with the hope of creating stability in the country. Joseph Kabila was President of DR Congo during the period 2001-2019. Following a controversial presidential election in late 2018, Felix Tshisekedi was declared the winner in January 2019. He is the first opposition candidate to win a DR Congo presidential election since the country gained independence in 1960.

Despite huge natural resources, DR Congo is one of the poorest countries in the world, and has been in a recession for decades. Many of the economic problems are due to the Belgian colony’s construction of one-sided economic structures, which drained the country of valuable resources. Mobuto Sese Seko’s long-standing political mismanagement has also brought serious financial consequences. Since the end of the war, there has been high economic growth in the country, but poor infrastructure, corruption and a poorly functioning judicial system have hampered growth.

Mining accounts for 70 percent of DR Congo’s export revenue. Diamonds, gold, copper, cobalt, wood products, coffee and crude oil are also important export goods. Due to a high dependence on mining revenues, DR Congo was one of the most affected African countries in the 2008 financial crisis.