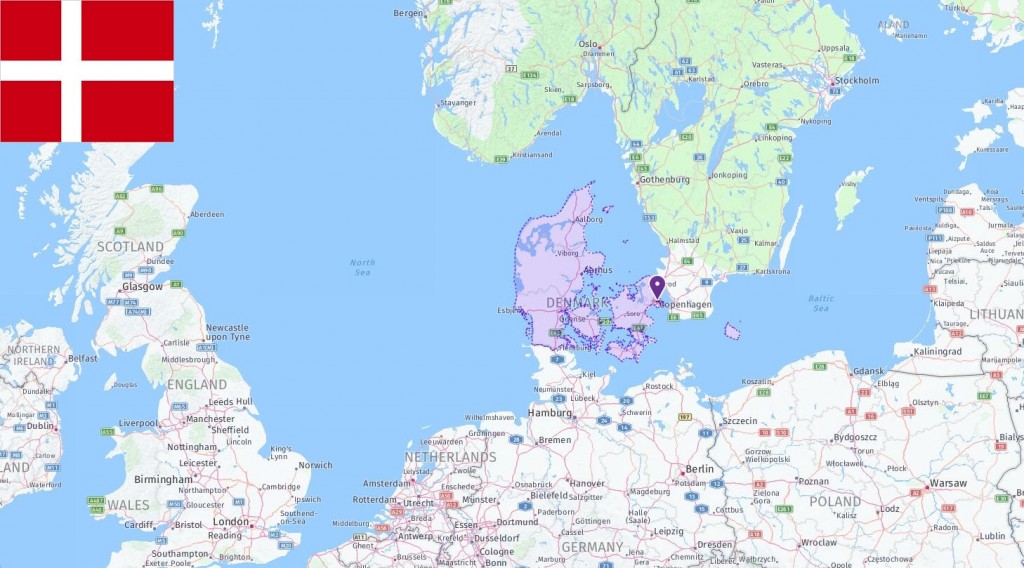 The most commonly used abbreviations about Denmark are DK which stands for Denmark and DKK which means Danish krone (Denmark currency). In the following table, you can see all acronyms related to Denmark, including abbreviations for airport, city, school, port, government, and etc.

Denmark is the southernmost country in Scandinavia. The country consists of the large peninsula of Jutland and the archipelago to the east, with about 500 islands, of which 79 are inhabited. Zealand, Funen, Lolland, Falster and Bornholm are among the best known. Denmark has a coastline on all sides except in the south where it borders Germany. The location makes the country a link between the continent and Scandinavia.

The Faroe Islands and Greenland are part of the Danish national community, but both have internal self-government. Denmark has a coastal climate with cool summers, mild winters and year-round rainfall. The country is exceptionally flat, and the highest mountain is Møllehøj, which extends barely 170 meters above sea level. Denmark is one of the most densely populated countries in Europe. About 30 per cent of the inhabitants live in the Copenhagen region.

The forests and coastal areas have a rich diversity of species, and conservation measures have led to the forest area in Denmark actually growing. At the same time, ice-covered Greenland is particularly vulnerable to climate change, which can provide warming many times higher than in southern parts of the world.

At the beginning of the Viking Age, Denmark consisted of several kingdoms, but just over 1000 years ago, King Harald Blåtann brought Denmark together in one kingdom. Since then, the country has been a Nordic great power for several periods. In the 1300s, Queen Margrete Valdemarsdatter brought together Scandinavia’s three countries in one union, the Kalmar Union. The union lasted until Gustav Vasa broke out and re-established the Swedish crown in 1523.

After the Middle Ages, Denmark lost several large land areas. The country stood from 1807 on France’s side during the Napoleonic Wars. Napoleon lost, and Denmark had to relinquish Norway to Sweden in the peace settlement in 1814. However, Denmark had to retain Iceland, Greenland and the Faroe Islands. In 1864, the country lost several dukes to Germany after the Danish-German war. In World War I Denmark was neutral, but during World War II the country was invaded and occupied by Germany. On 5 May 1945, the German forces capitulated in Denmark. The country has since been free. The union with Iceland ended in 1944.

Denmark is democratic and, like Norway, a constitutional monarchy, where the monarch has no real power. Since 1972 this has been Queen Margrethe II, who serves as the country’s head of state. The form of government is parliamentary. This means that the executive is responsible to Parliament. This power has the government, led by the prime minister, elected by the legislative assembly/parliament, the Parliament.

Denmark has been a member of the UN since its establishment in 1945, of NATO since its establishment in 1949 and of the EU since 1973. Membership in the EU and its relationship with the EU’s member countries are important for Denmark. The country has been a driving force for EU enlargement and actively participates in the debate on the future and role of the EU. NATO membership forms the foundation for Danish security policy. In recent years, Denmark has pursued a strict immigration policy. In 2016, the country introduced border control on the border with Germany, in response to the increased refugee flow.

The welfare state of Denmark has a mixed economy, and the country benefits from free trade within the EU. Denmark was hit hard by the global financial crisis in 2008, and did not return to the same level as in 2007 until eight years later.

Denmark’s economy is based on the service sector and financial operations. Agriculture is still an important trade route, and Denmark is a major exporter of meat, pork, eggs, cheese and butter. Fishing is also important. Since the 1970s, Danes have also absorbed oil and gas from the North Sea. Half of this is exported. Denmark is well advanced in industrial design. In the food and furniture industry, they are also at the top of the world.