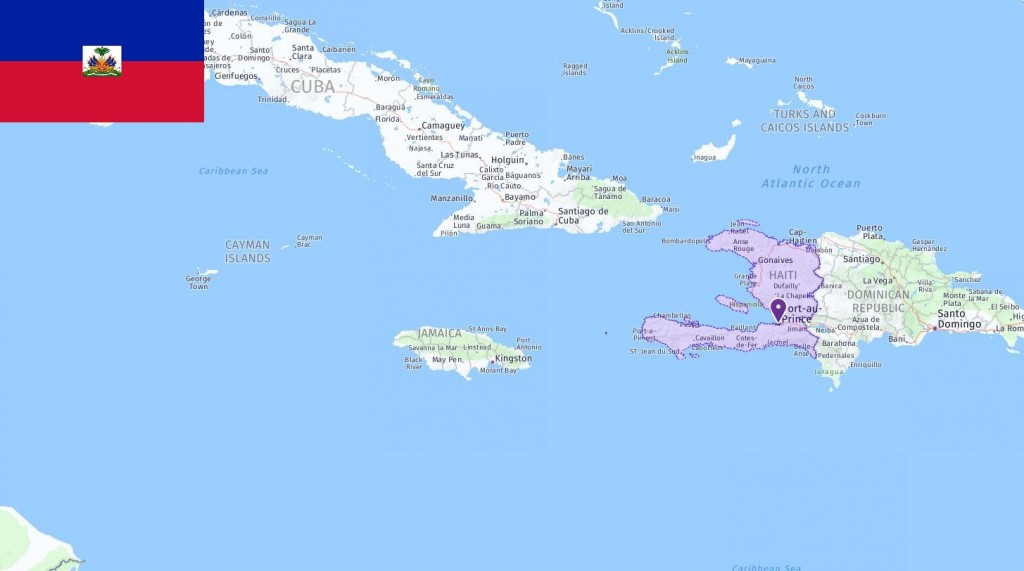 The most commonly used abbreviations about Haiti are HT which stands for Haiti and HTG which means Haitian gourde (Haiti currency). In the following table, you can see all acronyms related to Haiti, including abbreviations for airport, city, school, port, government, and etc. 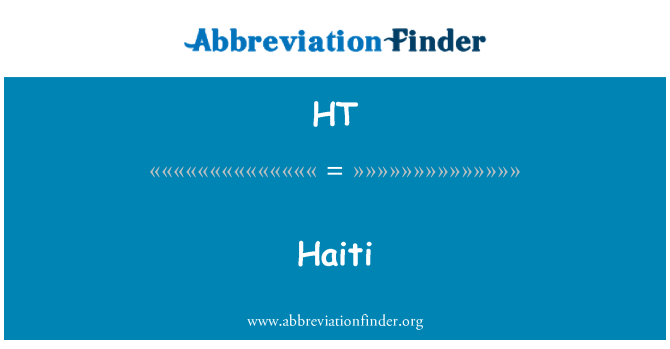 Haiti is the western part of the island of Hispaniola, as well as a number of smaller islands. On the eastern part of the island lies the Dominican Republic. Haiti has a hilly terrain with lots of mountains. On the coast there are plains and lower valley areas. The climate is tropical, but cooled by the trade winds in the area. Temperatures vary with the elevation differences in the country. In most parts of the country, there are two rainy seasons during the year.

Lush forests have previously covered the entire island, but deforestation has left only about 30 percent of the forests left. Deforestation has led to major environmental damage. Soil erosion is a huge problem and has made the country very vulnerable to floods, floods and landslides. Haiti is also located in an earthquake exposed region, and in 2010, the country experienced its most powerful earthquake in 200 years. The quake measured 7.0 on Richter’s scale, leading to enormous devastation. The country is also very prone to hurricanes. Both in 2016 and 2017, heavy hurricanes led to major floods, floods and landslides.

Before the island of Hispaniola was colonized by Kristoffer Columbus in 1492, about half a million Arawak-speaking people lived on the island. The indigenous population was quickly eradicated through warfare, forced labor and the introduction of European diseases. In 1697, Spain surrendered the western part of the island, which today is Haiti, to France. The area’s large plantations made Haiti one of France’s richest colonies. France transported up to three million slaves from Africa to Haiti to work on the plantations.

In 1791, the slaves revolted against the brutal French power. The French representatives on the island quickly lost control of the colony. In 1804, Haiti became independent, as the world’s first “black” republic. Since then, conditions in the country have been chaotic and characterized by major social and political problems. The United States has intervened several times, occupying Haiti from 1915 to 1934. The country was ruled by the physician François Duvalier (“Papa Doc”) from 1957-1971. After his death, his son Jean-Claude (“Baby Doc”) took over. Both regimes were very brutal dictatorships. “Baby Doc” was deposited at a military coup in 1986. The country has since been characterized by riots and several military coups. Haiti’s first democratic elections were held in 1996.

The President and the Government have the executive power in Haiti. The president is elected for five years at a time. The country’s first democratic constitution was approved in a referendum in 1987, and is inspired by the American and French system. According to the Constitution, Haiti is a democratic republic, but the system works poorly. The political parties are weak, and mostly act as tools for powerful individuals who want power. Both politics and the judiciary are steeped in that corruption.

The situation in the country is chaotic. Around 60 percent of the population lives below the national poverty line, very few have access to clean water and infant mortality is the highest in Latin America. It is mainly voluntary aid organizations that provide the population with social assistance such as health care and education. The 2010 earthquake led to enormous devastation and ravaged the capital. Nearly 40,000 people are still internally displaced following the devastation. The transmission and spread of diseases is a major problem. After the natural disasters of recent years, more than 10,000 people have died as a result of cholera. Over 150,000 adult Haitians are living with HIV/AIDS today, and the disease has led to over 90,000 children being orphans.

Haiti has the lowest gross domestic product per capita in the western hemisphere, and it is one of the world’s poorest. The differences between poor and rich inland are great. Without contributions from abroad, the country’s economy would have collapsed. Farming is not very efficient and mostly produces food for the individual household. The industry is simple and consists mainly of foreign factories. They contribute little to the state’s revenue due to very generous tax rules. Wage levels are also very low. The country is struggling with widespread corruption, and the troubled situation makes it difficult for foreign and national companies to establish themselves in the country. As the industry is small and agricultural production is mostly for own consumption, the country has a large trade deficit (they import more than they export).

Many Haitian families today survive on money they receive from relatives abroad. There is also a lot of smuggling to the United States, especially drugs. Frequent natural disasters have been a major financial burden for the country, not least the 2010 earthquake that caused enormous material damage and made 3 million people dependent on emergency aid.