The most commonly used abbreviations about Kenya are KE which stands for Kenya and KES which means Kenyan shilling (Kenya currency). In the following table, you can see all acronyms related to Kenya, including abbreviations for airport, city, school, port, government, and etc. 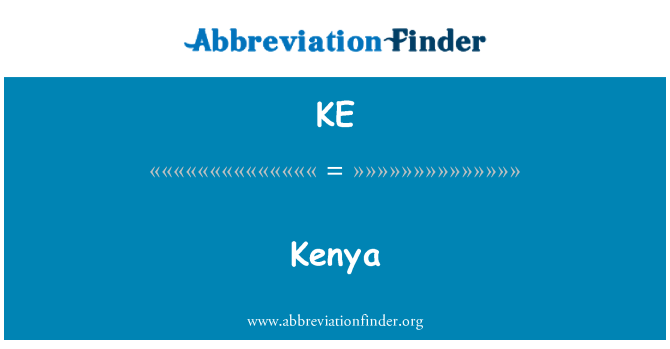 The landscape of Kenya is varied. In the south there are savannah landscapes, in the west there are tropical rainforests, while desert characterizes the landscape in the north. Throughout the country, the Rift Valley extends. Along the edge of the Rift Valley is Kenya’s highest mountain, Mount Kenya. The country is also known for Lake Turkana, which is one of the world’s largest permanent desert lakes. The climate in Kenya varies with the height of the landscape above the sea. The coastal climate is tropical, with high temperatures year-round. On the high plains it is generally slightly colder, with clearer differences between seasons. The low-lying areas around Lake Victoria are flooded at regular intervals, while the desert areas in the north experience periods of drought.

Kenya has very poor water quality and large rural areas do not have access to clean water at all. Illegal chopping of the tropical forest west of the country has caused the arable land to be washed away with rain and flood. Global warming and climate change are affecting Kenya’s climate. Drought and flooding have become more common and increasingly severe.

Arab traders settled along the coast of Kenya in the 7th century. Inland in Kenya lived African traders. Inland groups were affected by Arab trade along the coast, and the language of Swahili and the religion of Islam spread along the trade routes. In the 16th century, Portuguese came to the country, invaded the cities along the coast and created a trade route to India. The coast became an important center for slave and commodity trade. When the European powers divided the African continent between them during the Berlin Conference of 1884-1885, the United Kingdom secured Kenya. The British established trading stations and plantations. In 1920, the British colony of Kenya was formally established. Locals were severely oppressed, and British colonial leaders urged British and other Europeans to settle in the country. This created conflicts over land distribution, something that still characterizes the country. Only whites were allowed to own land, and the locals lacked fundamental rights.

In 1952, the Mau Mau uprising broke out, the uprising lasted until 1956. The uprising was triggered by a peaceful campaign in which Kenya’s African Union (KAU) demanded that the local people access land. When the peaceful campaign failed to materialize, an armed outrage erupted against white residents. The British faced the rebellion of putting large numbers of Kenyans in prison camps in very poor conditions.

Kenya became independent in 1963. The following year, Kenya became a republic under the leadership of the Kenya African National UNION (KANU) party. In practice, there has been a one-party system with only two leaders from 1963 to 2002. Criticism about the governance set has been hard hit. Opposition in the country was subject to repression, and several of the opposition parties were banned. After the end of the Cold War, the regime in Kenya had trouble holding power. Western aid donors demanded democratization for Kenya to continue to receive funding. The regime was particularly criticized for human rights violations. In 1991, the regime agreed to introduce a multi-party system, and during the 2002 elections, KANU lost power for the first time.

The 2007 elections led to closer citizen-like conditions between ethnic groups, and more than 1,000 people died in riots and 300,000 people were displaced. President Uhuru Kenyatta and the Vice President were later put before the International Criminal Court (ICC) for participation, but still won the next election in 2013.

Since 2011, Kenya has been part of the African Union forces in Somalia, and has since then been subjected to several major terrorist attacks within its own borders.

Kenya is a republic. The country was given a new constitution in 2010, which aims to improve the balance of power and decentralization of power, as well as strengthen the judiciary. The president heads the government, appoints ministers and is the formal head of state. The President and Vice President of the country are elected every five years. The President cannot be elected for more than two five-year terms. Kenya has 47 counties, all of which have a governor and a county assembly. The Kenyan party system is weak, and ethnic affiliation often plays a major role in politics. Party splits are common, and it is not uncommon for politicians to switch parties. Nor is it unusual for new parties and alliances to be formed before elections. Corruption is widespread and political loyalty can be bought.

Unrest, violence and mistrust characterize politics. The country’s last election in 2017 in which Kenyatta proclaimed the winner was canceled by the Supreme Court and the re-election was boycotted by the opposition. Opposition leader Rahila Odinga appointed “People’s President ” in January 2018. In March 2018, Kenyatta and Opposition Leader Rahila Odinga joined forces in a cooperation agreement. This has improved the situation somewhat, but the country still has strong political tensions.

There are around 40 different groups of people living in Kenya. Nearly two-thirds of the population belongs to some of the largest ethnic groups in the country: kikuyu, luhya, kalenjin, lou and kamba. The various ethnic groups in Kenya have long lived in harmony with each other, but contradictions between the various groups have resulted in violence in recent times. Half the Kenyan population is under 19 years of age.

Compared to most African countries, Kenya had a strong economy when it became independent in 1963. The 1980s presented several economic problems due to political mismanagement, lack of arable land and high population growth. In modern times, there have been major differences between a small affluent upper class and the poor, often landless majority of the people. In recent decades, the economy has slowly but surely rebuilt, but corruption and lack of modernization continue to pose major obstacles to the country’s economic development. Much of the country’s population lives below the poverty line and Kenya relies on international aid.

Most Kenyans work in agriculture. Kenya exports tea, vegetables, flowers and coffee. Kenya’s dependence on agriculture has made the country vulnerable to unstable precipitation and fluctuations in the world market price of tea and coffee. Today, agriculture contributes about 25 percent of the country’s gross domestic product. The service sector accounts for over 60 percent of the country’s gross domestic product, and tourism is an important industry. Kenya is also an important intermediary for trade with neighboring countries.