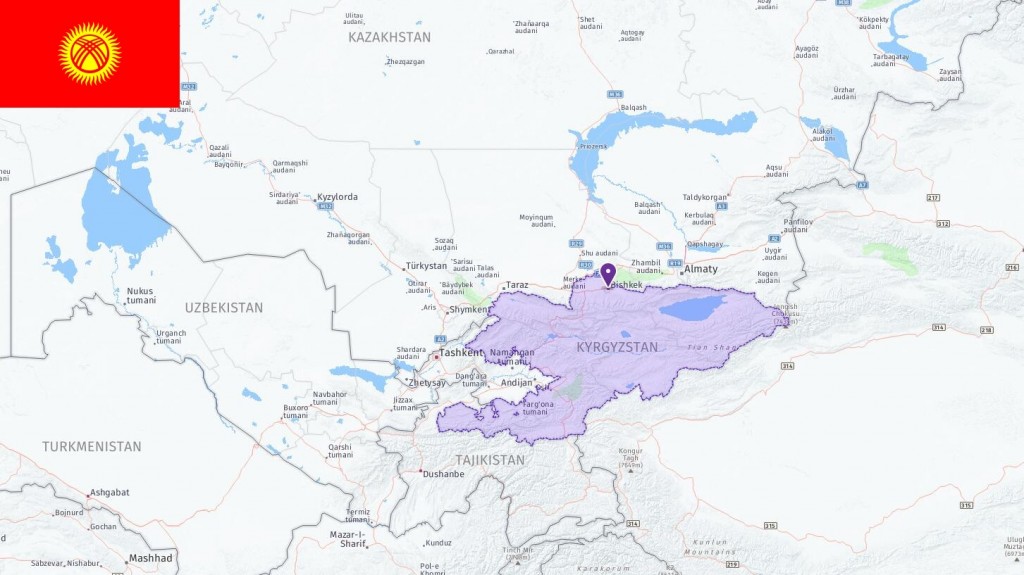 The most commonly used abbreviations about Kyrgyzstan are KG which stands for Kyrgyzstan and KGS which means Som (Kyrgyzstan currency). In the following table, you can see all acronyms related to Kyrgyzstan, including abbreviations for airport, city, school, port, government, and etc. 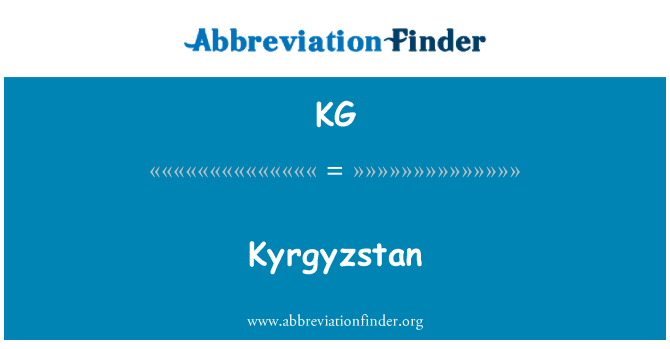 Kyrgyzstan is a small mountain country in Central Asia. Along the border with China, the Tian Shan mountain range, which is covered by snow, dominates much of the year. The country’s highest mountain, Pik Pobedy, is 7439 meters above sea level. The rest of the country consists of several mountain ranges separated by valleys. Northeast of the country lies Issyk-Kül, the world’s second largest mountain lake, surrounded by high mountain peaks. The southwestern part of the country lies in the Fergana Valley, where the subtropical climate and fertile soil farming and food production make it an important industry. The northern parts of the country have an inland climate with great differences between winter and summer.

Contaminated water is a major problem. Toxic waste water from mining is not adequately cleaned, and poses a major threat to the country’s rivers and water. The land is also plagued by reduced soil quality after many years of eutrophication and irrigation. In addition, overgrazing has caused about 60 percent of the country to be affected by soil erosion. That is, the arable land is worn away by wind, water, construction and the like.

Central Asia, where Kyrgyzstan is located, has been inhabited by nomadic peoples for thousands of years. The area has also been controlled by a number of great kingdoms, such as the Mongols, the Uighurs and the Kokhan Khan. In 1918, the Soviet Union took control of the area. Under Stalin’s rule, for the first time, the Kyrgyz population was forced to establish permanent housing and to set aside their nomadic lifestyle.

To strengthen its control over the area, the Soviet Union decided that Central Asia should be divided into five different Soviet republics. The division of these countries was characterized by little consideration, and their border areas are still debated today. In 1991, when the Soviet Union collapsed and Kyrgyzstan became an independent republic, ethnic conflicts between the five Central Asian republics ignited. The Fergana Valley, which extends through Kyrgyzstan, Uzbekistan and Tajikistan, became a center of ethnic conflict.

Since Kyrgyzstan became independent in 1991, the country’s politics have been marked by major political unrest, revolution, corruption and mismanagement. In 2010, the political conflict escalated, especially the southern parts of the country were hit hard by violent riots and major devastation. The country was given a new constitution in 2010 and formally became a parliamentary democracy.

Kyrgyzstan is a republic where the formal power resides with a president who is elected every six years. The president can only be re-elected once. The country also has a government and a prime minister. However, a lack of democratic processes has meant that the power of the president is very large compared to that of the prime minister and the government.

The policy is strongly characterized by widespread corruption. This has led to democracy in most cases failing. Violations and human rights violations often occur, and conflicts between the country’s various ethnic groups have escalated. In addition, high poverty, lack of a functioning government and poorly developed infrastructure have made the people of Kyrgyzstan particularly vulnerable to the spread and spread of diseases. The country’s health services are poorly developed, and there is a great lack of medicines, vaccines and other medical equipment.

Kyrgyzstan’s political situation and corruption have led to organized crime being established in the country, especially in the form of drug smuggling. In recent years, militant Islamism has also become a growing problem for the country. These environments have caused other countries such as China, Russia, Uzbekistan, Tajikistan and the United States to react strongly to the country’s political situation and lack of control.

Kyrgyzstan is a poor country with poorly developed infrastructure and industry. The country has not been able to exploit its vast natural resources. There are oil, gas, minerals and precious metals in the country, but its operations are neither well utilized nor well controlled. Despite this, the extraction and export of gold and other precious metals account for over 30 per cent of the country’s income. Agriculture is another important industry, and cotton, wool, silk, sugar and meat are important export goods.

The Kyrgyz economy is very unstable. The uncertain political situation and the unstable relationship with the neighboring countries mean that the country’s economy varies widely from year to year. The country remains dependent on international aid, and on the fact that emigrated Kyrgyz people send money home to family and acquaintances in their home country. About 30 percent of the population lives in absolute poverty.

In the long term, the tourism industry can become an important industry for Kyrgyzstan. However, the political conditions and the widespread corruption have meant that few tourists come and that few foreign companies choose to invest in the country.