Las Palmas is reasonably good enough alone to make the trip to the Canary Islands outside Spain. And for us big city lovers, Las Palmas is the reason for the election being Gran Canaria and not one of the other islands. Gran Canaria’s capital is one of Spain’s largest cities, offering visitors a four-kilometer promenade along Europe’s arguably finest metropolitan beach.

On the seafront, it is teeming with outdoor seating, cafes and people’s lives. It is simply said that one would have been happy with less! And to top it all off, Las Palmas has a quaint little old town with a great cathedral.

Las Palmas also has the character of being an “island city”. The atmosphere is more relaxed than on the mainland of Spain and the people are laid back and nice. We think it’s even more enjoyable here in Las palmas than in many of Spain’s larger mainland cities, just so you know! Especially in the winter season!

Get to know Las Palmas

The city of Las Palmas was founded after the Spanish defeated the indigenous people, the Guanches in 1487. The original name was Real de Las Palmas. In 1492 Columbus himself will be anchored in the city’s port, on his way to his first trip to America.

The second year of the year can be mentioned the year 1595 when Francis Drake attempted to plunder the city. And we must not forget the year 1599 when the city burned down.

In the 1600s, Las Palmas had a strong economic development, especially based on sugar cane exports to Europe and America. Prosperity also led to the city being constantly exposed to pirates’ attacks in the 18th century.

Las Palmas gradually gained great importance as a maritime city. The harbor is good, it has been – and is – an important support point for many ahead of the Atlantic crossing.

In 1927, the city gained the status of provincial capital. By the way, tourism first became an important industry in the 1960s. Today, the city has a cosmopolitan feel, which is not least due to a thriving tourist industry and a strong shipping industry.

Las Palmas has about 385,000 inhabitants and is with it the 9th largest city in Spain. 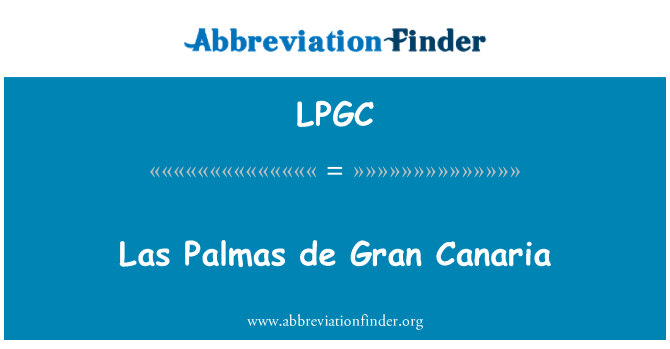 The most commonly used abbreviations about Las Palmas is LPGC which stands for Las Palmas. In the following table, you can see all acronyms related to Las Palmas, including abbreviations for airport, city, school, port, government, and etc.