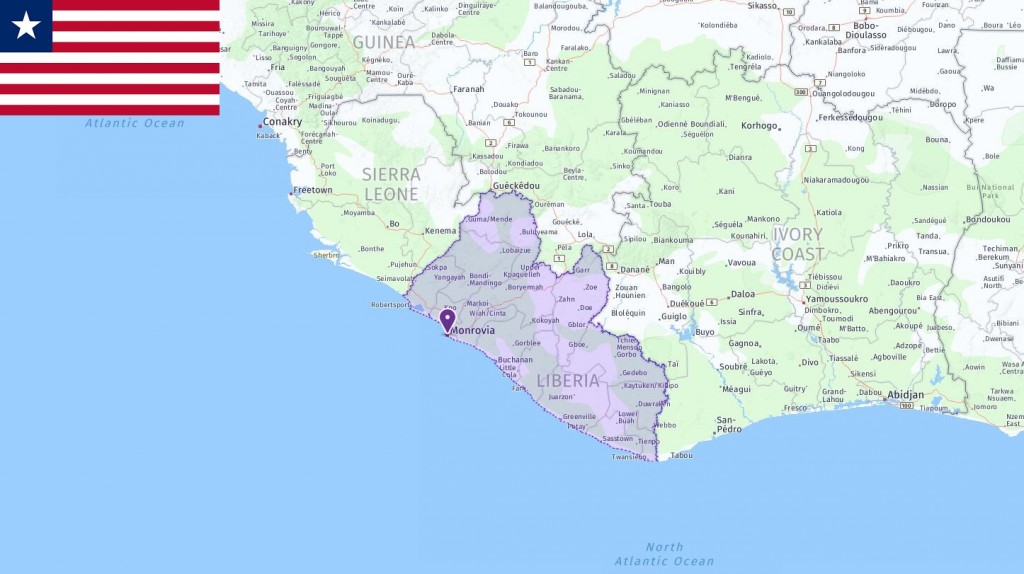 The most commonly used abbreviations about Liberia are LR which stands for Liberia and LRD which means Liberian dollar (Liberia currency). In the following table, you can see all acronyms related to Liberia, including abbreviations for airport, city, school, port, government, and etc. 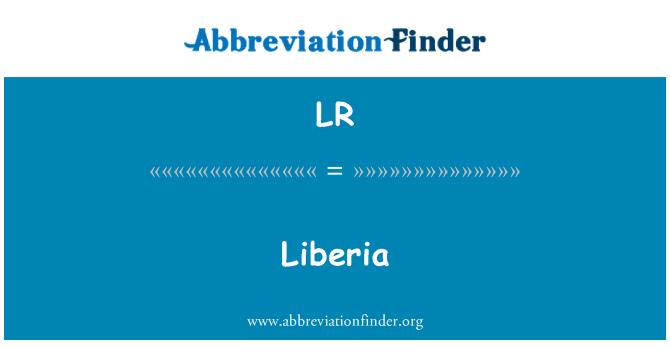 Liberia is a long and narrow country. The entire coast consists of sandy beaches, where there are both swamps and lagoons. Inland there is a plain landscape with a lot of forest, while the landscape in the north is characterized by smaller mountain ranges. A number of rivers flow down from the mountains into the Atlantic Ocean. The climate in Liberia is tropical, with high humidity and temperatures between 20 and 35 degrees year-round. The rainy season lasts from April to November, before dry winds from the Sahara take over from January to March.

Failure to manage the timber industry has led to deforestation, and several forest areas have now become savannas. The country has little access to fresh water, and only 13 percent of the village population has access to clean water. After many years of civil war, the country lacks a proper sanitation and sewerage system, which has led to major health problems for its citizens.

When the Portuguese arrived on the coast of Liberia in 1461, the country was inhabited by smaller tribes who farmed. The Europeans started an extensive slave trade, and the people of Liberia acted as middlemen in the Europeans’ trade with the West Indies. In 1821 freed slaves came from the United States and settled in what is today the capital Monrovia. In 1822, The American Colonization Society purchased part of the land and formed an area for freed American slaves. Over a period of almost 20 years, more than 13,000 freed slaves arrived in the area. Liberia became an independent republic in 1847, and was ruled by the American-Liberian population.

Since then, Liberia has been marked by great differences. In particular, the differences between the former slaves and tribesmen have created unrest. The former slaves of America brought with them and formed a Christian faith and American colonial culture, and had little in common with the tribes. The True Whig Party, founded in 1870, had great control over Liberia for over 100 years.

During the period between 1930-1970, the state apparatus in the country was further developed, and the state was given responsibility for larger parts of the country. Then- PresidentWilliam Tubman did much to improve the economy and smooth the differences, and the country experienced economic growth and progress in several areas. After Tubman’s death, Liberia entered a recession that ended in a coup d’état in 1980, led by Samuel Doe. The 1980 coup marked the end of American liberals’ leadership and power in the country. Doe led an oppressive regime which in turn created tensions between the people of the country. Doe was killed during a new coup in 1989. After the coup, Charles Taylor hijacked power and led the country into a very bloody civil war. More than 270,000 people lost their lives and hundreds of thousands fled to neighboring countries. After a peace treaty was signed in 2003, the United Nations, international organizations and regional organizations have devoted considerable resources to stabilizing the country.

Liberia is a republic. The country has always had close ties to the US, and the political system is based on the US. The power is divided between a legislative, executive and judicial power. The president is the country’s head of state and is elected for six years at a time. When Ellen Johnson Sirleaf was named president for the period 2006-2018, she was Africa’s first democratically elected female head of state. During her time, she worked to build the country after 14 years of war and violence. Among the biggest challenges were combating corruption in the country, disarming the many rebel groups and securing access to electricity and clean water.

Despite peacekeeping, stability and reconstruction of a war-torn country, there is still high crime in Liberia. Several villages are still ruled by rebel groups and gangs, and parts of the capital Monrovia are still destroyed. Armed robbery and rape are common. Relief workers and personnel from the peacekeeping forces have also been charged with rape. As a result of many years of war, Liberia has one of the world’s highest numbers of post-traumatic stress. During the Civil War, large parts of the country’s children were forcibly recruited into the military, and several former child soldiers today suffer from severe trauma and intoxication problems. Today, with limited resources, efforts are being made to rehabilitate war-traumatized child soldiers and rape victims.

Liberia is rich in natural resources and has for some time been among the world’s largest producers of rubber. The main export items are palm oil, gold, diamonds, iron ore and oil. The mining industry is also important for the country’s economy. Despite access to natural resources, Liberia is one of the poorest countries in the world, much because of a history of war and political turmoil. The country experienced a gentle economic upturn between 2010 and 2013, but growth reversed in 2014 when there was a global decline in commodity prices and the country was hit by a severe ebola outbreak.

The country is struggling with huge foreign debt, and the Money Fund has refused to grant more loans to the country. Liberia still relies on foreign investment and assistance to create economic growth and development. There is high unemployment among the population, and especially young people are unemployed. An increasing number of people depend on switching goods and services to survive, and the barter market is now larger than the normal economy.