Since starting out as a small fishing village over 800 years ago, Liverpool has had its ups and downs. The city that has been known primarily for its great sons John, Paul, George and Ringo for the past forty years is seriously beginning to make its mark on the European map again. It all started with Liverpool becoming the European Capital of Culture in 2008.

Parts of Liverpool were also included on UNESCO’s World Heritage List in 2004. New museums, shopping centers and bars have sprung up in previously dilapidated warehouses, and the number of hotels and restaurants has doubled over the past ten years.

Most people who visit Liverpool for the first time do so as fans of either Liverpool FC football club or The Beatles, but are surprised by the residents’ humor, hospitality and hospitality for tourists.

Neither families of children, couples nor singles will have any problem enjoying their days in Liverpool, regardless of time of year.

Get to know Liverpool

Liverpool is a port city with nearly 450,000 inhabitants in north-west England, a few miles from the northern border to Wales. Liverpool is built on various levels up to 70 meters in height and borders the outlet of the River Merseys in the west and south. The city has its 800th anniversary in 2007. After a long period as one of England’s most important port cities, the economy fell sharply in the latter half of the 20th century. But now it seems to have turned again, with the flourishing of businesses and tourism, and not least with Liverpool as the European Capital of Culture in 2008.

Liverpool’s inhabitants are called Liverpudlians, or on slang Scousers after the local stew scouse, which consists of cooked meat and vegetables. (Scouse came from Norway and was really called the lobscouse, ie lapscouse!) Scouse has also become the name for the very distinctive Liverpool dialect. If you have only visited London on a previous visit to England, you will probably be surprised at how talkative and welcoming people are in Liverpool.

Most of Liverpool’s attractions are within the downtown area, which can roughly be defined as the area between Albert Dock, Liverpool Cathedral, Hope Street, Lime Street Station and Dale Street.

The port areas of Mersey

The port areas of Mersey, west of the city center, are the oldest parts of the city, and around Pier Head, Albert Dock, Kings Dock and Queens Dock you will find many of Liverpool’s foremost tourist attractions. Here are the art galleries Tate Liverpool and The Walker, as well as bars, shops, restaurants, The Beatles Story, Maritime Museum and Museum of Liverpool Life.

The port areas are really a historic attraction in their own right, and were included on UNESCO’s World Heritage List in 2004.

The shopping area and the nightlife area

Liverpool’s central main streets are Lord Street and Church Street, which cross into Bold Street. These are the foremost shopping streets with many major shopping centers and retail chains. Another popular tourist area teeming with shops, pubs and restaurants is the Cavern Quarter, which is bounded by the streets of Lord, Victoria, North John and Stanley. This is Liverpool’s premier nightlife area, buzzing with life, music and stag parties on weekends. To the east, the lively restaurant / pub street Hope Street runs north / south between Liverpool’s two cathedrals, an Anglican and a Catholic. Just west of the Anglican Cathedral is Europe’s oldest Chinatown, with a large and impressive entrance hall with colorful dragon carvings.

If you ever feel like you’ve gone astray, you can scout for the 125-meter-high Radio City Tower, located in Houghton Street, right in the center. The tower was built in 1965 and the house originally a rotating restaurant that soon went doll. Since 1990, the tower has been home to Liverpool’s most popular radio station Radio City, and on weekends you can take the elevator up to the observation platform. Just east of the tower is the Lime Street Station and the bus terminal, where buses to the airport depart.

Just north of downtown is Anfield Road and Goodison Park one and a half miles apart. These are the home runs of the city’s two major football teams, the arch rivals Liverpool FC and Everton FC.

If you take the legendary Ferry ‘Cross The Mersey, you come to Birkenhead, famous for its shipyards, Europe’s first tram line and the place where Michael Marks, as in Marks & Spencer, opened their first stores. Or you can take a ferry from Pier Head to Seacombe in Wallasey, which has now opened its Spaceport, a virtual aerospace center.

Around Liverpool city center you have suburbs like Bootle and Crosby in the north, and Prescot and Huyton in the east, but for the casual tourist on a few days’ visit, probably the center will be of greater interest.

Liverpool is England’s third largest city in terms of population. 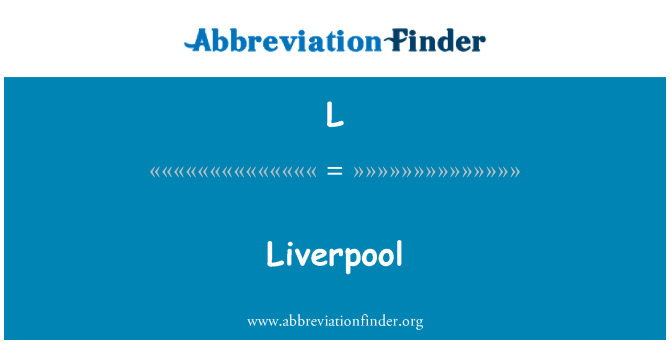 The most commonly used abbreviations about Liverpool is L which stands for Liverpool. In the following table, you can see all acronyms related to Liverpool, including abbreviations for airport, city, school, port, government, and etc.