What is the abbreviation for Louisiana state? Louisiana is located in the southern United States, at the mouth of the Mississippi in the Gulf of Mexico. In 1803, then President Thomas Jefferson bought the state, named in honor of King Louis XIV of France, from Napoleon I. In 1812 Louisiana became the 18th state. There is still a strong French influence. But Spanish, Indian and African influences can still be found today.

The state covers an area of ​​135,382 km² – with approximately 4.53 million inhabitants. The capital of Louisiana is Baton Rouge with approximately 230,000 inhabitants. Louisiana borders the state of Texas to the west, Arkansas to the north, Mississippi to the east, and Louisiana to the Gulf of Mexico to the south. The state’s official nickname is Pelican State, due to the large population of pelicans. Another nickname is Bayou State because there is a lot of swampy area in Louisiana. The state’s motto is “Union, Justice and Confidence”.

Louisiana is the world’s largest producer of crawfish and produces approximately 90% of the world’s demand. Hank Williams Jr., Britney Spears, Truman Capote, Louis Armstrong, Jerry Lee Lewis and Reese Witherspoon come from Louisiana. New Orleans, the largest city in Louisiana, has always been a center of music. Jazz in particular was significantly developed here and many claim that the city was the birthplace of jazz. On August 29, 2005, large parts of the country, including New Orleans, were hit by hurricane “Katrina” and partially devastated. The storm probably killed about 800 people and caused chaos for days in New Orleans. The economic damage may be up to $ 200 billion.
Some may also be interested to know that Angola is home to one of the largest prisons in the United States – it is surrounded on three sides by the Mississippi.

The north of Louisiana also lies in the so-called Tornado Alley. This is a particularly tornado-rich area in the Midwestern United States, where over a thousand large and small tornadoes roam across the country each year, especially in the spring. The US states of Oklahoma, Arkansas and Missouri are entirely within Tornado Alley. The northeastern part of Texas, the northwestern part of Mississippi, central and southern Illinois, and the southwest of Indiana and parts of Nebraska as well as smaller parts of Tennessee and Kentucky to Tornado Alley. Since 1977, the wonderful song “You Are My Sunshine” from 1939 has been one of the two official anthems of Louisiana.

Baton Rouge
The city of Baton Rouge has approximately 230,000 residents, making it the second largest city in Louisiana after New Orleans and the state capital. Baton Rouge has been the capital of Louisiana since 1849. Up to 800,000 people live in the metropolitan area of ​​the city. Baton Rouge is located in southeastern Louisiana and was founded in 1699. The city on the banks of the Mississippi River is a major center of the petrochemical industry and the city’s port is the ninth largest in the United States. The city is also a center for colleges and universities. But anyone looking for art, museums, theaters and operas is also right here.

Alexandria
The city of Alexandria is almost the geographic center of Louisiana and has approximately 50,000 inhabitants. The city is on the Red River and was founded in 1818. A cultural highlight of the city is the Alexandria Museum of Art. Since the city is close to many historically interesting, it is a good starting point for those interested in history.

Lafayette
The city of Lafayette in southern Louisiana has approximately 120,000 inhabitants and is the fourth largest city in Louisiana. Lafayette was founded in 1821, but at that time the city was still called Vermilionville. The city is named after the French General Lafayette. The city is extremely popular with tourists. This is probably due to the strong influence of the Cajun culture and the Creole culture. This is particularly evident in the local cuisine. On weekends, Downtown Lafayette turns into one of the most popular destinations in the entire region, and musical desires hardly remain unfulfilled.

Lake Charles
The city of Lake Charles in southwest Louisiana has approximately 72,000 inhabitants and as many as 195,000 people live in the metropolitan region. The city was founded in 1861 under the name Charleston. The city is located on the Calcasieu River in close proximity to Lake Charles and Prien Lake. Today Lake Charles is best known for its role in petrochemicals and as a place of gambling. The city’s nickname, “Festival Capital of Louisiana”, continues to show its importance for the region, with over 75 festivals taking place here annually. Museums and theaters can also be found in Lake Charles.

New Orleans
About 345,000 people live in New Orleans, the largest city in the state of Louisiana. In the metropolitan area there are even 1.23 million people. The city is located in the southeast of Louisiana and was founded in 1718. The city on the banks of the Mississippi is an industrial center with an important port. But New Orleans is much better known for its “French Quarter”, which impresses with an architectural mix of French and Spanish colonial times. Many also see the birthplace of jazz here. The city is also known for Hurricane Katrina, which hit it on August 29, 2005 and destroyed it to a large extent. This happened in part because New Orleans is 7 m below sea level and is the lowest point in the state of Louisiana.

Shreveport
The city of Shreveport in northwest Louisiana has approximately 200,000 residents, making it the third largest in the state of Louisiana. The city’s metropolitan area even has 375,000 inhabitants, making Shreveport the economic and cultural center of the so-called Ark-La-Tex region, the border area between Arkansas, Louisiana and Texas. The city on the banks of the Red River was founded in 1836. If you are a tourist in Shreveport you will definitely not be bored, there are numerous theaters, museums and churches just waiting to be visited. The city is also known by its nickname Sportsman’s Paradise because of the many rivers and lakes in the area, which offer numerous opportunities for water sports.

The most commonly used abbreviations about Louisiana are LA which stands for Louisiana. In the following table, you can see all acronyms related to Louisiana, including abbreviations for airport, city, school, port, government, and etc. 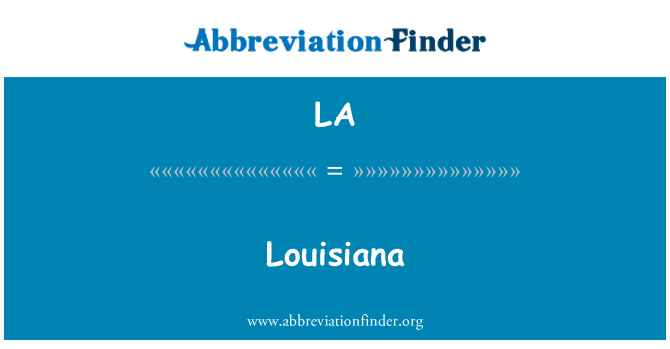