What is the abbreviation for Maryland state? The state of Maryland is located in the eastern United States and belongs to the region of the Central Atlantic States. Maryland is bordered by Pennsylvania to the north, Delaware to the northeast, Virginia to the southeast and West Virginia to the southwest. Furthermore, Chesapeake Bay in the east of the state cuts deep inland and thus established the border with the Atlantic Ocean. The state was officially named after Henrietta Maria of France the Queen of England, Scotland and Ireland. Nevertheless, many historians believe that the state was named after Mary, the mother of Jesus. Maryland also has several nicknames, the most important of which are “Old Line State”, “Free State”, “Little America” ​​and “America in Miniature”.

The state of Maryland covers an area of ​​32,133 km² and is therefore one of the smaller states in terms of area, it is the ninth smallest state in the USA. Approximately 5.9 million people live in Maryland and make the state one of the most densely populated in the United States. Maryland ranks fifth here. The state capital is Annapolis with approximately 38,000 inhabitants. The state’s largest city is Baltimore with approximately 620,000 residents. Maryland was one of the thirteen colonies and declared independence from Great Britain in July 1777. On April 28, 1788, Maryland became the seventh state in the United States. The Mason and Dixon border, which also forms the border between Pennsylvania and Maryland, is the traditional border between the north and south of the USA. Maryland’s economy is very diverse, but the majority is in services.

Despite the relatively small size of the state, there are very different topographical conditions. That’s why Maryland is nicknamed “America in Miniature”. With Baltimore, there is a large metropolis near the lonely hills of the Appalachian Mountains and small fishing villages on the coast. It is certainly worth mentioning that the hymn of Maryland is sung after the melody of the German Christmas carol “O, Tannenbaum”. Well-known personalities from Maryland include the musician Frank Zappa, the swimmer Michael Phelps and the actress David Hasselhoff.

The NSA, which became known in the context of the spying affair, maintains its headquarters in Fort Meade, the so-called Crypto City. Sports enthusiasts may be interested to know that swimmer Michael Fred Phelps won 28 Olympic medals – including 23 gold medals, making him the most successful Olympic champion since the start of the games. Phelps was born on June 30, 1985 in Baltimore. He and his wife, whom he had married after the 2016 Olympics in Rio de Janeiro, have a son born on May 5, 2016.

Baltimore
The city of Baltimore is by far the largest city in Maryland with approximately 621,000 inhabitants. Around 64% of the population are African-American and around 28.5 are white. The rest are Latinos and others. Around 2.7 million people live in the city’s metropolitan area. Baltimore was founded in 1729 and is named after Baron Baltimore. At the beginning of the city’s history, Baltimore was an important port for the tobacco trade. Today it is no longer just tobacco, but the importance of the port for the city is still there. Baltimore was the inspiration for the American national anthem during the British-American War. Baltimore is the first port of call for visitors to the state of Maryland. There are many historical buildings in the city as well as nationally known monuments. But Baltimore is one of the most dangerous cities in the United States. The murder rate here is around 56 per 100,000 inhabitants. In Berlin the rate is around 3.5.

One of the twin cities of Baltimore is Bremerhaven.

Cumberland
The small town of Cumberland is located in the northwest of Maryland on the banks of the Potomac River and has approximately 20,000 inhabitants. The city was founded in 1787 and is nicknamed “Queen City”. In the past, Cumberland was the second largest city in Maryland, but today it is still the economic center of the northwestern part of Maryland. For tourists, Cumberland is interesting because of its historic city center, which contains many buildings from the 19th and early 20th centuries. These are mostly located in the Downtown Cumberland Historic District, which has been on the list of Historic Places since 1983.

Ocean City
The city of Ocean City is located in the extreme southeast of Maryland on the Atlantic coast. Ocean City has about 7,000 inhabitants, but is still a very popular destination. In summer, there are around 300,000 visitors per weekend to the 7,000 inhabitants. The reason is that the city is at the southern end of Fenwick Island and offers visitors an approximately 16 km long beach. Nowadays, however, Ocean City has already reached a length of 14 km, where hotels, bars and restaurants can be found. Spring break is particularly popular. Here, visitors can pursue all conceivable water sports or simply sizzle in the sun.

St. Mary’s City
The small town of St. Mary’s City in southern Maryland at the confluence of the Potomac River and Chesapeake Bay was founded in 1634, making it the fourth permanent English settlement in North America. In the first years of its existence, St. Mary’s City was the capital of the Maryland colony until it was moved to Anne Arundel Towne, now Annapolis, in 1695. The whole place is a National Historic Landmark and if you want to breathe in the air of the early settlers you cannot avoid a visit.

Fort Meade
The small town of Fort Meade with its approx. 10,000 inhabitants is actually nothing special if there weren’t a facility of the US Army that has attracted attention both historically, during the civil war and more recently. This is the headquarters of the American intelligence agency NSA, which gained worldwide fame as part of the surveillance and espionage affair in 2013 through the publications by Edward Snowdon. The NSA building complex dominates Fort Meade and is also known as Crypto City.

The most commonly used abbreviations about Maryland are MD which stands for Maryland. In the following table, you can see all acronyms related to Maryland, including abbreviations for airport, city, school, port, government, and etc. 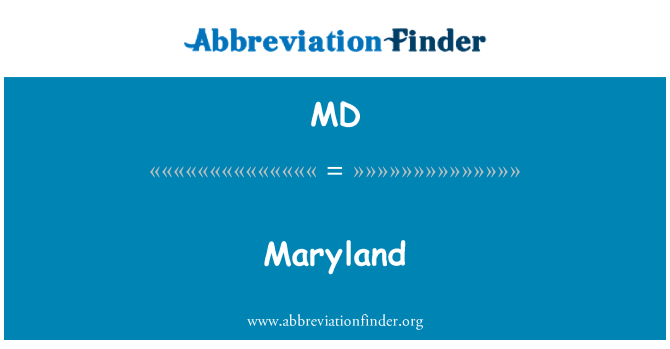