The Middle East, a region in southwestern Asia, sometimes includes parts of North Africa. Originally, the Middle East was a British colonial term that, by the middle of the 19th century, referred to Afghanistan, Pakistan and India. Beyond India lay “the Far East” and between the Middle East and Europe lay “the Near East”, which roughly corresponded to the old Ottoman Empire. The location of the Middle East has then gradually shifted to the west.

Nowadays, the term is used for an area consisting of the countries of the Arabian Peninsula as well as Turkey, Syria, Lebanon, Israel, Egypt, Jordan, Iraq and Iran. Sometimes Libya and Sudan as well as Cyprus and Afghanistan are included. This definition has its roots in a British military designation that came into use in 1932, when the British Air Force’s Middle East headquarters in Baghdad merged with the Near East Command in Cairo, where the term Middle East was adopted. During the Second World War, the British ground troops stationed in Egypt used the term, which is popularized by frequent use of the press and radio. Continued unrest in and frequent reporting from the area during the post-war period has further increased the use of the term.

The central parts of the Middle East (Egypt, Israel, Lebanon, Turkey, Syria, Jordan, Kuwait, Iraq, Iran and the states of the Arabian Peninsula) constitute a coherent cultural area that has seen early civilizations born as well as the three monotheistic religions Judaism, Christianity and Islam. At this meeting place between Asia and Africa, both the city and the state emerged earlier than in other parts of the world. Today, life in the region is characterized by three modern circumstances: the fact that the Middle East with its oil is the world’s center of energy in terms of energy, the revival of Islam and the deep conflict between Israel and the Arab states.

In the Middle East, there is a strong contrast between the relatively small cultivable areas and the vast desert areas. The population is then concentrated to places where there is water: coasts, river valleys and precipitous mountain slopes. The ecological conditions have given rise to three forms of life: agriculture, urban industries and nomadic livestock management, which, however, have been economically and culturally well integrated with each other.

The Middle East has often been regarded as a mosaic by ethnic groups. However, the size of the units varies, and the ethnic boundaries are not as sharp as the edges of the mosaic pieces. The population consists partly of a few large peoples, such as Arabs, Turks, Persians and Kurds, and partly by a large number of smaller peoples. Culturally, most ethnic groups have been characterized by Islam, a dominant worldview, which – whether one embraces or rejects it – must be taken into account. The latter applies not only to practitioners of other religions but also to secular Muslims.

The most commonly used abbreviations about Middle East are ME which stands for Middle East. In the following table, you can see all acronyms related to Middle East, including abbreviations for associations, airlines, funds, non-profit organizations, and etc. 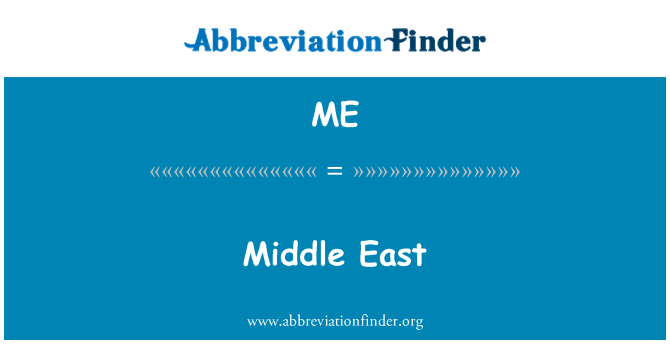