What is the abbreviation for Mississippi state? The state capital is Jackson with approximately 175,000 residents. Mississippi borders the states of Louisiana and Arkansas in the west, Tennessee in the north and Alabama in the east. The south of the state is bordered by the Gulf of Mexico. The state’s nickname is The Magnolia State and its motto is Virtute et armis. Mississippi seems to be one of the most mystical places in the United States due to its “rurality”. The state also belongs to the so-called Bible Belt. Before the European settlement, Indians of the Natchez, Caddo and Chickasaw tribes lived here. Unfortunately, the state has little economic power and its main industries are cotton, cattle breeding, oil and gas exploration. Still, the state of Mississippi appears to be an inspiring state. So Elvis Presley was born here and the Nobel Prize for Literature William Faulkner lived here as well as John Grisham. But other music greats such as the blues legends BB King, Robert Johnson and Muddy Waters also come from Mississippi. More recent music is represented by Britney Spears.

In 1964, the state became the scene of a cruel crime based on what was then a widespread racist foundation: on June 21, three American civil rights activists in Neshoba County were brutally murdered by Ku Klux Klan members with the involvement of local police forces. The murder was only solved by the FBI and one of those responsible was found guilty of violating civil rights, not murder. The case was filmed by Alan Parker in 1988 under the title “Mississippi Burning”.

In January 2005, however, the case was reopened by committed prosecutors and a murder charge was brought against one of the accomplices at the time. ER Killen, now 79 years old in 2005, was acquitted at the time. A jury found Killen guilty of triple manslaughter on June 21, 2005. Killen was therefore sentenced to 60 years in prison. On August 29, 2005, large parts of the country on the Gulf Coast were hit by hurricane “Katrina” and partially devastated. The storm claimed the lives of several thousand people and caused chaos for days in parts of the country. The town of Biloxi in particular, with around 50,000 inhabitants, went through the world press because large parts of the city were completely destroyed and people had to wait for help for days.

The northwest of Mississippi also lies in the so-called Tornado Alley. This is a particularly tornado-rich area in the Midwestern United States, where over a thousand large and small tornadoes roam across the country each year, especially in the spring. The US states of Oklahoma, Arkansas and Missouri are entirely within Tornado Alley. The northeastern part of Texas, the north of Louisiana, central and southern Illinois, the southwest of Indiana and parts of Nebraska as well as smaller parts of Tennessee and Kentucky count to Tornado Alley.

Jackson
With approximately 175,000 residents, Jackson is the largest city in the state of Mississippi and also the state capital. 540,000 people live in the metropolitan area of ​​the city. The city was founded in 1822 with the intention of building a centrally located capital. The city lies on the banks of the Pearl River. Jackson is one of the 30 most dangerous cities in the United States, although it is generally very safe. In addition to theaters and museums, Jackson also has numerous historic buildings waiting to be visited. The city is also known for its flourishing music scene, which has something to offer for every taste.

Biloxi
The city of Biloxi in the southern part of the state on the coast of the Gulf of Mexico has approximately 45,000 inhabitants. The city is named after the Indian tribe of the Biloxi. The city is known as a center of the tourism, gaming and fishing industries. The city was hit particularly hard by Hurricane Katrina, so almost 90% of all buildings were destroyed by a 9 m high tidal wave and the subsequent flooding. Before the hurricane, Biloxi was the state’s third largest city. However, the reconstruction is progressing. Still, visitors can enjoy the city’s beaches and maybe do something to help rebuild the city.

Gulfport
With approximately 68,000 residents, the city of Gulfport is the second largest city in the state of Mississippi and is located in the extreme south of Mississippi on the coast of the Gulf of Mexico. The city was founded in 1887 by William H. Hardy. The city should act as an end point of a planned rail line. Much of the city was destroyed by Hurricane Katrina in 2005 and the city has been under reconstruction since 2006. The city has a lot to offer visitors. So most of them certainly come because of the very beautiful sandy beaches, but the water park Marine Life Oceanarium should also attract many visitors. The highlight of the year is the Mississippi Deep-Sea Fishing Rodeo.

Natchez
The city of Natchez has approximately 18,000 residents and is located in the southwestern part of the state on the Mississippi. The city was founded in 1716, making it the oldest city in Mississippi. Before the Civil War, Natchez was Mississippi’s economic and political center. This can still be seen today in the many antebellum houses that reflect the former prosperity of the city. Many of the houses are open to visitors and can be visited, this is also possible on guided tours. Today Natchez has the largest collection of antebellum houses in all of Mississippi.

Southaven
The city of Southaven in northeast Mississippi has approximately 50,000 residents, making it the third largest city in the state of Mississippi. The city is known as the “Top of Mississippi” and is located in close proximity to the city of Memphis in Tennessee. The city is quite young and has only had city rights since 1980. Nonetheless, Southaven is one of the fastest growing cities in the United States. The city is a great starting point for tours to Tennessee and Arkansas, as it is much more relaxing here than in Memphis.

Vicksburg
The city with about 27,000 inhabitants is located on the Mississippi in the middle of the “Blues Country”. The famous Highway 61, known as the Blues Highway, also runs past here. Here, on a hill, a huge open-air museum commemorates the battle during the American Civil War. The Battle of Vicksburg took place from May 19 to July 4, 1863 as a siege battle. This siege and the subsequent victory of the Northern troops is considered a decisive turning point in the American civil war.

The fighting began with unsuccessful attacks by the Tennessee Army of the Unionists on Vicksburg, in which Sherman as commanding general of the XV. Corps took part under Ulysses S. Grant. After these failures, General Grant began to siege the city, which after about six weeks resulted in the surrender of the Confederate Mississippi army under General Pemberton in Vicksburg. The Confederates of the Southern States lost their penultimate base on the Mississippi. The last base – Port Hudson, Louisiana – fell later.

The most commonly used abbreviations about Mississippi are MS which stands for Mississippi. In the following table, you can see all acronyms related to Mississippi, including abbreviations for airport, city, school, port, government, and etc. 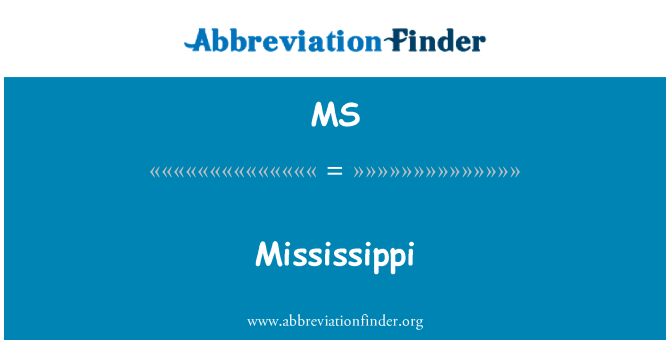