MC is the abbreviation for Monaco, the 194th largest country in the world. Officially the Principality of Monaco, Monaco is a country located in Europe, bordering France. Monaco is the capital city of Monaco. 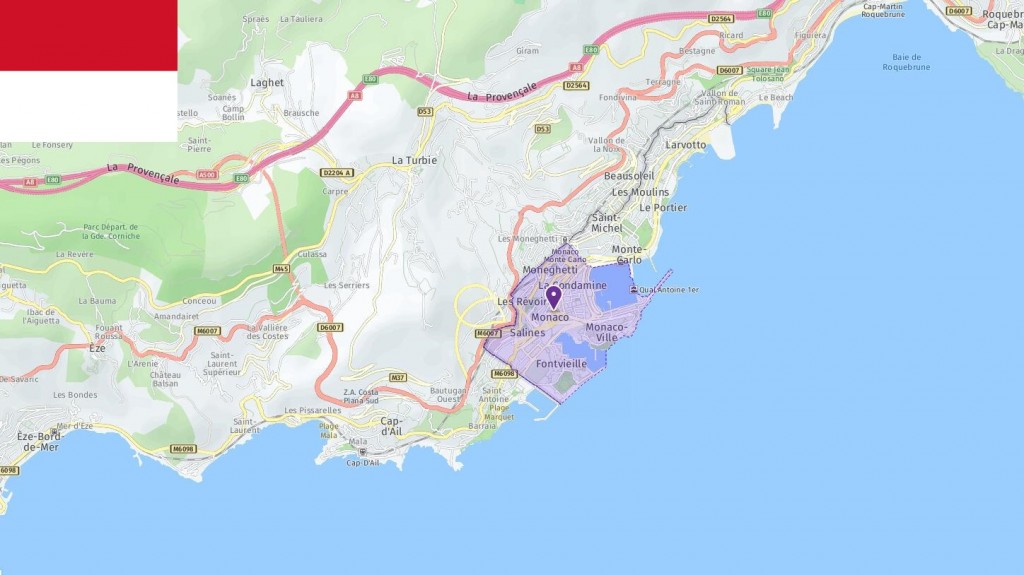 The most commonly used abbreviations about Monaco are MC which stands for Monaco and EUR which means Euro (Monaco currency). In the following table, you can see all acronyms related to Monaco, including abbreviations for airport, city, school, port, government, and etc. 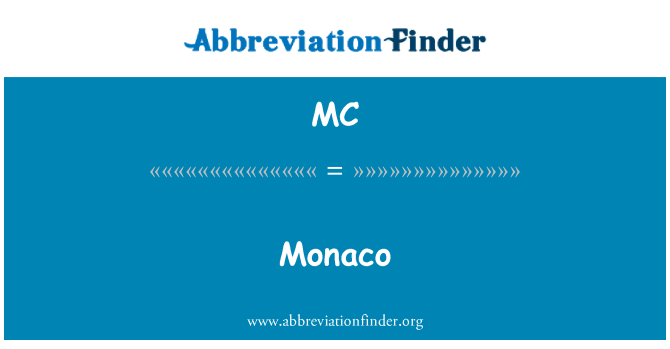 Monaco is the world’s second smallest country, with an area of ​​only 1, 95 square kilometers. The country has a barely five kilometer border with France, and an equally long coastline towards the Mediterranean. The terrain is hilly and the highest point is 162 meters above sea level. The coastline is steep, with several lower coves. With the exception of the landscaped parks, almost the entire area has been developed. The country consists mainly of a continuous urban area divided into four areas. Monaco-Ville is the original old town and serves as the country’s capital. La Condamine is located at the port area, Monte-Carlo is in the northern part of the city and Fontvieille is a new area built on an artificial peninsula in the Mediterranean. Since the country began to create artificial peninsula in the Mediterranean, the area has increased by about 20 percent.

Monaco has a typical Mediterranean climate with hot dry summers and mild humid winters. Most of the rainfall comes in the fall. Cold fall winds from the European hinterland can sometimes bring frost in the winter.

Monaco was founded in 1215 as a colony for the Italian city of Genoa, and the family of Grimaldi has been in power since 1297. In the years 1789-1814, the city was under French rule. After being the protectorate of Sardinia until 1860, the country’s autonomy was recognized through an agreement between France and Monaco in 1861. Monaco’s first government as sole ruler until a new constitution was adopted in 1911. Seven years later, an agreement was made that Monaco should be under the protection of France and that it should follow French political, military and economic interests.

A new constitution from 1962 removed the death penalty, gave women the right to vote and founded a supreme court to safeguard the fundamental rights of the inhabitants. In 2002, it was decided that the country would remain independent if the Grimaldi family were not to produce heirs to the throne. In 2005, in order to reduce the chance that the lineage of the genus will be broken, it was decided in 2005 that women have also inherited the Grimaldi genus’s title in the country.

Monaco has been a constitutional monarchy since 1911. The prince is the head of state and the prince status is inherited in the family. The government is headed by a prime minister and is the executive authority in the country. The legislative power is divided between the prince and a nationally elected council. Provisions approved by the National Council are sent to the government for approval, and then signed by the prince. Monaco does not have regular parties, but candidates are grouped into lists. The present prince is Albert 2.

The Principality has a customs union and other special arrangements with France. Among other things, France is responsible for its defense. Monaco joined the United Nations in 1993 and the Council of Europe in 2004. The Principality is today a fashionable resort, and is famous for the Monte Carlo casino and the Monaco Grand Prix car race.

Monaco’s laws say that women and men should be equal. Nevertheless, certain forms of discrimination against women occur. Among other things, it is more difficult to inherit a Monegasque citizenship from a woman than from a man. Discrimination against sexual minorities is not allowed, but the country prohibits same-sex marriage and adoption.

Monaco is a center for finance and banking due to favorable tax arrangements. The citizens pay no tax on income and wealth, and companies registered in the country have very low taxes. Because of these schemes, many rich people choose to settle in the country. Since Monaco requires little financial transparency from companies registered in the country, many criminal background businesses also choose to establish themselves there. To get rid of its bad reputation as a tax haven and a haven for criminal economic activities, Monaco has recently begun to provide more financial information about criminal businesses and individuals to the EU.

Tourism is the country’s most important source of income. The state is the largest owner of the Société des Bains de Mer, which operates the casino, restaurants and hotels, the opera as well as the Monte Carlo Rally and Monaco Grand Prix. In the Fontvieille industrial area there is some light industry. The state and the Grimaldi family own a significant portion of the country’s properties. The telephone and postal services and the tobacco industry are state monopolies.