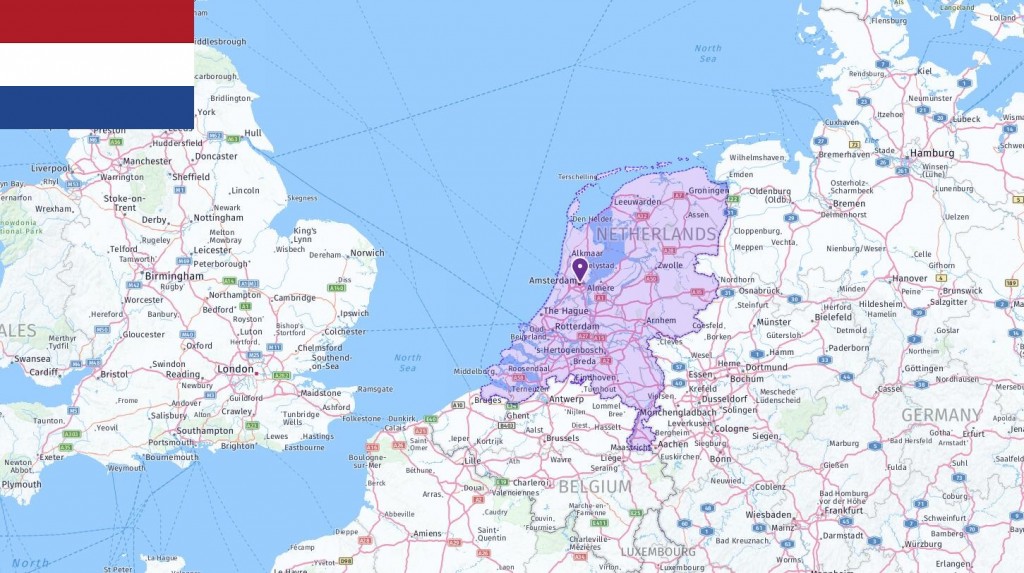 The most commonly used abbreviations about Netherlands are NL which stands for Netherlands and EUR which means Euro (Netherlands currency). In the following table, you can see all acronyms related to Netherlands, including abbreviations for airport, city, school, port, government, and etc. 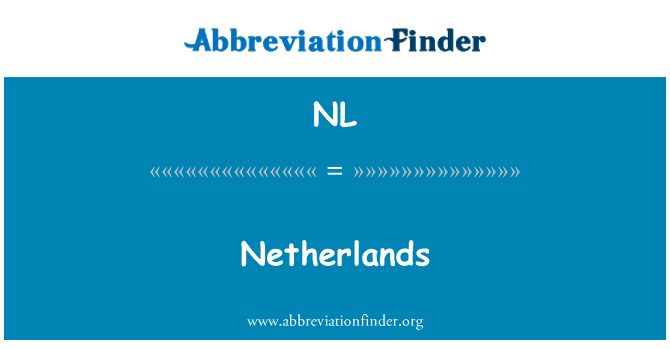 The Netherlands and the Caribbean islands of Aruba, Curacao and Sint Maarten make up the Kingdom of the Netherlands. The country is an exceptionally flat area, and a third of the land area is below sea level. The western half of the country is an average of one meter above sea level. Dams and dams along the coast, and along the many rivers and canals, prevent flooding. The highest point, Vaalsberg, lies on the border with Germany and Belgium and is 322.7 meters above sea level. The country has a coastal climate, which means that winter is not very cold and that summer is not very warm. Many flowers thrive in such a climate and the Netherlands is known for its tulips, which are grown over large areas.

The very densely populated country with its intensive agriculture has many environmental problems, especially with eutrophication, heavy metal emissions and acid rainfall. The Netherlands uses a lot of resources to solve these problems.

The area that is today the Netherlands has been inhabited since the Stone Age and has been part of many kingdoms and empires. The area was incorporated into the Roman Empire 50 years BC After the fall of the Roman Empire, the country became part of the empire of Charlemagne, and later the German-Roman Empire, until it came under Spain in the 16th century.

During the First and Second World War, the Netherlands remained neutral. In 1940, however, the country was occupied by Germany and the royal house and government fled to Britain.

The country has been an important maritime and trade nation, gaining colonies in Southeast Asia, the West Indies and Africa. The vast majority of colonies gained independence in the post-war period.

The Netherlands is a constitutional monarchy. The country is parliamentary, which means that the government is based on the majority in parliament. The House of the Netherlands has two chambers: the Lower House and the Senate. Dutch politics has traditionally been characterized by strong religious divides between Catholics and Protestants. There are no barriers to small parties being represented in parliament. This has meant that the Netherlands has an exceptionally large number of parties, and that the governments have been large coalitions.

The Netherlands is known for a liberal policy: They have liberal drug and sex buying laws, they were the first countries in the world to give women the right to vote, and the first country in the world to approve same-sex marriage and active euthanasia. The country has traditionally been tolerant of various religions and friars, but from the 2000s the tolerance of Islam has been weakened. The population’s support for the EU has also become weaker in recent years. In the 2017 election, the Immigration, EU-Critical and Islamist Party became Partij voor de Vrijheid (PVV), the country’s second largest.

Dutch membership in the European Union (EU) and NATO is important for the country’s foreign policy. The country is active in the work for economic development and human rights, and is among the countries in the world that provide the most assistance. Several important international bodies have their headquarters in the Netherlands, such as the International Court of Justice (ICJ) and the United Nations Organization for the Prohibition of Chemical Weapons (OPCW).

The Netherlands is a trade and export nation with a well-developed industrial sector. The country’s economy is largely based on imports of raw materials that are processed into finished products and resold. The traditionally most important industrial groups are machinery and metal, electronics, chemical products and textiles. In the 1950s, the Netherlands helped to establish the European Coal and Steel Community, which eventually became the EU. Agriculture is important and the country is the world leader in horticulture. The country’s most important natural resources are oil and gas, which are found in sea areas off the Dutch coast.

The location of the Netherlands makes it an important part of Europe’s trade routes. Much of the trade in and out of the EU goes through the country and the port of Rotterdam is Europe’s largest. The Netherlands has an open economy that is almost devoid of customs walls. The economy is largely based on international trade. This makes the country vulnerable to fluctuations in the world economy. The country was hit hard by the financial crisis in 2008 and the subsequent euro crisis.

In the 2018/2019 school year, the UN Association offers a game where the student is to resolve a conflict in the Security Council. The Netherlands is a member of the Security Council and the sections that follow are information related to this game.

The Netherlands gives high priority to European cohesion, and will probably try to form a bloc with other NATO and EU countries. They are in close contact with the United States, and have joined several US-led military operations.

In several submissions to the Security Council, the Netherlands has emphasized the humanitarian situation in conflict areas such as Yemen. They will therefore, therefore, prioritize the protection of emergency workers and hospitals, so that the conflict affects civilians as little as possible.

At a meeting of the Security Council on April 17, 2018, the Netherlands very strongly expressed that all ports had to be opened in order to be able to receive emergency aid and goods. They were also very concerned that the ability of Yemeni payers to decline has declined, as public wages have not been paid and inflation has made everything more expensive. For the Netherlands, it may therefore be appropriate to propose some form of financial assistance to the Yemenis.