What is the abbreviation for New Mexico state? New Mexico is located in the southwestern United States. Its name comes from the Spanish conquerors who called the area west and north of the Rio Grande New Mexico. New Mexico is also called the Land of Enchantment.
It was not until 1912 that the area was admitted to the Union as the 47th state. It has a long history in Spain. In 1540, the Spanish conqueror Coronado crossed what is now New Mexico in search of the fabulous seven golden cities. The city of Santa Fee, founded in 1599, is the oldest state capital in the United States. Until 1846, New Mexico was under Spanish control. The state still has a large Hispanic population. In addition, Indian tribes native to New Mexico left their mark. Tourists can visit Indian ruins, ancient Frontier forts and Spanish missions. The legendary “Billy The Kid” (1859-1881) took part in the Lincoln County Cattle War between rich cattle breeders and business people in New Mexico. He was shot in front of a saloon at Fort Sumner in 1881 by Sheriff Pat Garrett – with whom he had been friends for a while – without warning. The state of New Mexico covers an area of ​​314,915 km² – with around 2.1 inhabitants. The capital of New Mexico is Santa Fe with approximately 75,000 inhabitants.

Santa Fe
Santa Fe or full name La Villa Real de la Santa Fé de San Francisco de Asís “is the capital of the American state of New Mexico. It is located in the north of the state and its population is approximately 75,000 inhabitants. The first settlement of the Territory by an Indian tribe dates back to the 12th century, and Santa Fé was named the capital of the Viceroyalty of New Spain as early as 1610, making it the oldest capital in the United States, and Santa Fe’s long history offers a large number of historical attractions.

Albuquerque
Albuquerque is the largest city in New Mexico with almost 546,000 residents. In fact, 887,000 people live in the city’s metropolitan area. Approximately half of New Mexico’s residents live in this region. The city is located on the Rio Grande and the Sandia Mountains stretch to the east. The University of New Mexico and Kirtland Air Force Base are located in Albuquerque.

Carlsbad
The city of Carlsbad in the Chihuahua Desert is the capital of Eddy County in New Mexico and has approximately 26,000 inhabitants. It is a tourist stronghold and offers breathtaking natural beauties in the Carlsbad Cavern National Park or in the Guadalupe Mountains National Park nearby. The city’s economy is based on a huge potassium and petroleum industry.

Farmington
The city of Farmington, founded in 1901, has approximately 38,000 inhabitants and is located on the Colorado Plateau in northwestern New Mexico. It is known across the borders of New Mexico for its baseball tournaments. Farmington caused a worldwide sensation in March 1950 when allegedly several flying saucers were observed there.

Los Alamos
Los Alamos is a small town with about 12,000 inhabitants in northeastern New Mexico. The Manhattan Project was carried out there in the 1940s, on which the first atomic bomb detonation in history took place on July 16, 1945 on the designated test site.

Las Vegas
Las Vegas in New Mexico – not to be confused with the game city of the same name in the state of Nevada – is a city with about 15,000 inhabitants divided by the Gallinas River into a western and an eastern part. It was founded in 1935 and, thanks to its connection to the rail network in 1880, experienced a large economic and population growth up to one of the largest cities in the southwestern United States. Today the New Mexico Highlands University is located there.

Las Cruces
Las Cruces is located in the center of New Mexico and has around 100,000 inhabitants. It is the second largest city in the state. It is both the geographic and economic center of the Mesilla Valley. And its skyline is drawn by the Organ Mountains behind it. Economically, Las Cruces is characterized, among other things, by a lively film industry.

Alamogordo
Alamogordo is located in central New Mexico and has approximately 35,000 inhabitants. A settlement in the area can be traced back to the 9th century. Near the city is Holloman Air Force Base, where various experiments were carried out from the 1940s until the early 1960s to improve safety on Air Force flights. The city last caused a sensation in 2001 when the Christian Church burned all tapes of Joane K. Rowling’s Harry Potter among other books.

Rio Rancho
Rio Rancho is the third largest city in New Mexico with almost 90,000 inhabitants. It belongs to the metropolitan area around Albuquerque. Rio Rancho is also the fastest growing city in the state. This is primarily due to its modern economy, in which the Intel Corporation is the largest employer. In 2005, Rio Rancho became the first city in the United States to have WiFi available everywhere.

Roswell
Roswell is a city in southeastern New Mexico. It has nearly 50,000 residents and is the fifth largest city in the state. Roswell is known as the site of the Roswell UFO incident. But it was only through a book by Charles Berlitz and William L. Moore from 1980 that UFO theories became known worldwide. Accordingly, a UFO crashed here with an alien who is said to be dead. The remains of the alleged UFOS were found on July 14, 1947 by a farmer who handed them over to the responsible sheriff on July 7. The latter in turn informed the Roswell Army Air Field (RAAF) – a base of the US Army. Army personnel then examined the debris, collected them all and transported them by truck to the army base in Fort Worth in Texas Texas. However, the alleged impact site of the UFO is 75 miles from the city.

In fact, the pieces of debris found were the remains of a crashed, high-altitude stratospheric balloon with radar reflectors, but this is still unknown to the UFO community around the world. Nowadays you can visit the “Roswell UFO Museum” and book tours of the crash site. Famous “children of the city” include John Denver and Demi Moore. On October 14th the spectacular fall ski jump started from around 39 km high by the Austrian Felix Baumgartner. He had reached this height with a balloon.

Silver City
Silver City is a mining town with approximately 10,500 inhabitants. Silver City is named after a silver mine that was located near the city. Even today you can still see the city’s mining past. The area offers numerous opportunities to experience the nature of the American Southwest, such as the City of Rocks State Park.

The most commonly used abbreviations about New Mexico are NM which stands for New Mexico. In the following table, you can see all acronyms related to New Mexico, including abbreviations for airport, city, school, port, government, and etc. 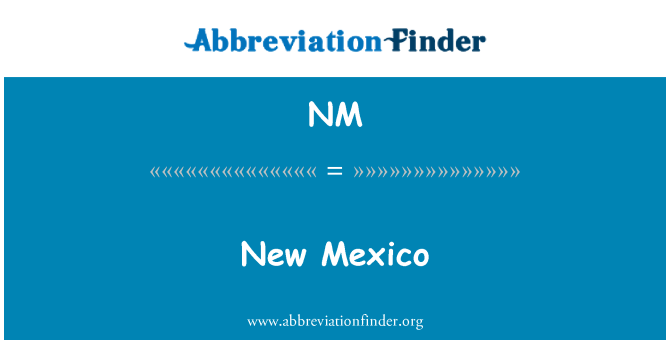