What is the abbreviation for New York state? New York is located in the northeast of the USA on the Atlantic Ocean and is one of the so-called Central Atlantic States together with the states of New Jersey and Pennsylvania. New York borders Canada to the north and northwest, more specifically to the Canadian provinces of Québec and Ontario, Massachusetts, Connecticut and Vermont to the east, and Pennsylvania and New Jersey to the south. New York also has a maritime border with the state of Rhode Island. New York has a coastline to the Atlantic Ocean via Long Island. It also borders Lake Erie in the west and Lake Ontario in the northwest.

The area of ​​what is now the state of New York was mostly inhabited by the tribes of the Lenni Lenape, Mohican and Munsee, the Abenaki, the Iroquois, the Shinnecock, the Pequot and the Narraganset in pre-European times. Most members of these tribes were displaced. Only the Iroquois still live largely in the New York area. From a European perspective, the Dutch were the first to populate the area. The Dutch colony of Nieuw Nederland, founded in 1621, and thus also the city of Nieuw Amsterdam (now New York City), founded in 1624, was annexed by the English in 1664 and was divided into New Jersey and New York. In 1667 the Dutch ceded the colony Nieuw Nederland in the peace of Breda. The current state was named after the Duke of York.

Nowadays, even without New York City, New York is a very popular tourist destination. In summer, tourism focuses on Downstate New York, especially the popular beaches on Long Island. In winter, by contrast, Upstate New York dominates, especially the small towns in the Appalachian Mountains are popular winter sports resorts. Fall seems to have been made for the entire state with the Indian Summer, the warm weather period in late autumn with the characteristic intensive leaf discoloration in the deciduous and mixed forests. But the extreme west of the state also attracts a large number of visitors with the Niagara Falls.

New York City
New York City, this huge city that captivates people all over the world, with its numerous skyscrapers, the many different cultures and the cultural highlights is simply considered “the” city of the USA. New York City was the first place that numerous immigrants from Europe entered the United States in the 19th century to finally be able to live in the country of their dreams. And who does not know the Statue of Liberty in the port of New York City, the countless New York museums, Broadway, the numerous nightclubs and bars, Chinatown, Manhattan, the Bronx, the many New York hotels or Wall Street, the financial center of the world. Everyone should have visited this city at least once in their life. And because the Big Apple really captivates everyone, we at Goruma have dedicated a separate article to the city.

Albany
The city of Albany has approximately 98,000 inhabitants and is the capital of the state of New York. There are even 870,000 people living in the city’s metropolitan area. Albany is located in the eastern part of New York, about 240 km north of New York City, near the confluence of the Mohawk River and the Hudson River. European settlement of the area began in 1614 with the construction of the Dutch Fort Nassau. However, this was abandoned after four years. In 1624, however, Fort Oranje was founded, the colony’s first permanent settlement. The fort developed into an important post for the fur trade, so that Pieter Stuyvesant founded the settlement Beverwyck in 1652, which is now Albany. After the conquest by the English, the city was renamed Albany in honor of the Duke of York and Albany von Beverwyck. In 1797, Albany became the state capital of New York, replacing Kingston, which was burned down during the Revolutionary War.

Nowadays, most government and administrative offices as well as seven colleges and universities can be found here. The architectural appearance of the city is very interesting as it mixes historical buildings with very modern structures such as the Empire State Plaza. But Albany does not only have something ready for architecture lovers. There are also several interesting museums, such as the New York State Museum, which is the largest of all 50 State Museums.

The most commonly used abbreviations about New York are NY which stands for New York. In the following table, you can see all acronyms related to New York, including abbreviations for airport, city, school, port, government, and etc. 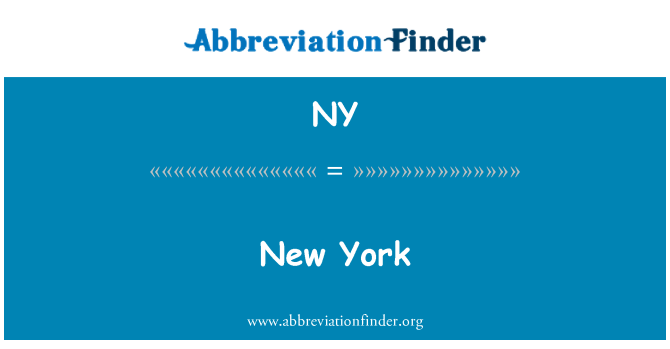