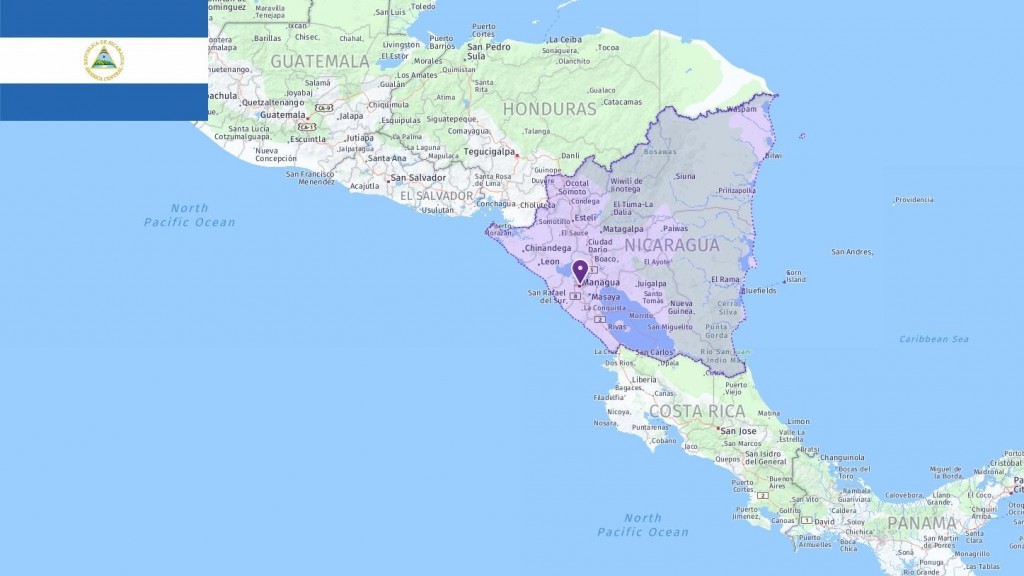 The most commonly used abbreviations about Nicaragua are NI which stands for Nicaragua and NIO which means Córdoba (Nicaragua currency). In the following table, you can see all acronyms related to Nicaragua, including abbreviations for airport, city, school, port, government, and etc. 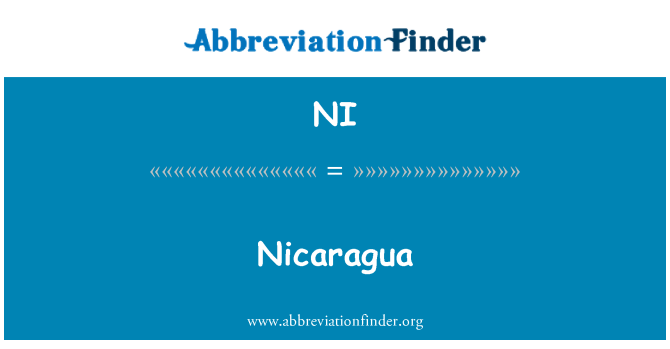 The inland consists of a partly wooded high plateau and fertile valleys. To the east is a wide coastal plain with lagoons, beaches and river deltas where it rains a lot. The climate in Nicaragua is tropical and the temperature varies little, but the country is exposed to extreme weather.

The eastern region holds the largest remaining rainforest in Central America. However, it decreases rapidly. About 75 percent of the original forest is chopped to farm. At least half of the deforestation has occurred during the last 60 years. The supply of clean drinking water is poor due to pollution. Pesticides used on fruit and cotton plantations since 1970 have contributed to serious health problems for many workers.

Before Spanish colonialists arrived in the 1520s, various indigenous people lived in Nicaragua. Nicaragua was a Spanish colony until 1821, and became an independent republic in 1838.

In the early 1900s, civil war broke out in Nicaragua, where the Somoza family took power through a coup d’etat in 1936. The Somoza regime was backed by the United States and ruled Nicaragua through a military dictatorship that created discontent and resistance. The regime’s corrupt handling of the reconstruction following an earthquake in 1972 triggered a new civil war in the country. The Sandinist National Liberation Front (the Sandinists), which waged guerrilla war against the Somoza regime, thus gained increased support among the population.

The Sandinists overthrew the Somoza regime and took over the government in 1979. They had a socialist ideology, which helped the United States see them as their enemies. The United States therefore supported the Contras military group in a new phase of the civil war (1979-1990). Contras aimed to control the Sandinist regime and operate from bases in neighboring Honduras. In 1986, the International Court of Justice in The Hague ruled that the United States violated international law by supporting Contras.

The civil war ended in 1990 with a peace agreement in which Contras was to disarm and a political election was held. The Sandinists became the largest party, but lost the election to the Conservative National Opposition Union, which consisted of fourteen political parties.

According to the Constitution, Nicaragua is a democratic republic, but the country is governed by the increasingly authoritarian leader Daniel Ortega, who has been president since 2007. Ortega was amended the constitution in 2014 to allow the president to be a candidate in several subsequent elections. Ortega can thus remain president for life.

Ortega was an early member of the Sandinist National Liberation Front (FSLN), which has become the political party he now heads. Ortega was elected president of Nicaragua for the first time in 1985 and was elected 1990. He won again in 2006 and established the second Sandinist government in Nicaragua. He was re-elected in both 2011 and 2016.

Ortega’s increasingly authoritarian way of ruling has led to protests. In the spring of 2018, street protests were hit hard by the authorities, with several killed. Ortega receives strong criticism internationally for gross human rights violations. The country is now in political and economic crisis.

Nicaragua is the second poorest country in Latin America after Haiti. The country is very class-divided and conservative. Abortion is illegal and homosexuality was only allowed in 2007. Domestic violence and sexual abuse of girls and women is a major problem. Relations with neighboring Costa Rica are tense due to disagreements over the border.

Nicaragua has struggled with poor economy, much due to high defense spending during the civil wars. Agriculture is the cornerstone of the economy, although the industrial and tourism sectors have grown in recent years. The country is dependent on a few agricultural products and is therefore very vulnerable to fluctuations in commodity prices on the world market. In 2001, for example, a fall in coffee prices led to increased unemployment and poverty for Nicaraguan farmers.

1/3 of the unemployed are employed in the primary industries responsible for export goods. The country exports such as beef, coffee, tobacco and bananas. The United States remains the most important trading partner.

Resources and income are unevenly distributed, unemployment is high, and the country relies on foreign aid. The International Monetary Fund (IMF) required tightening of public spending to be willing to provide financial support. Therefore, Nicaragua has privatized state enterprises.