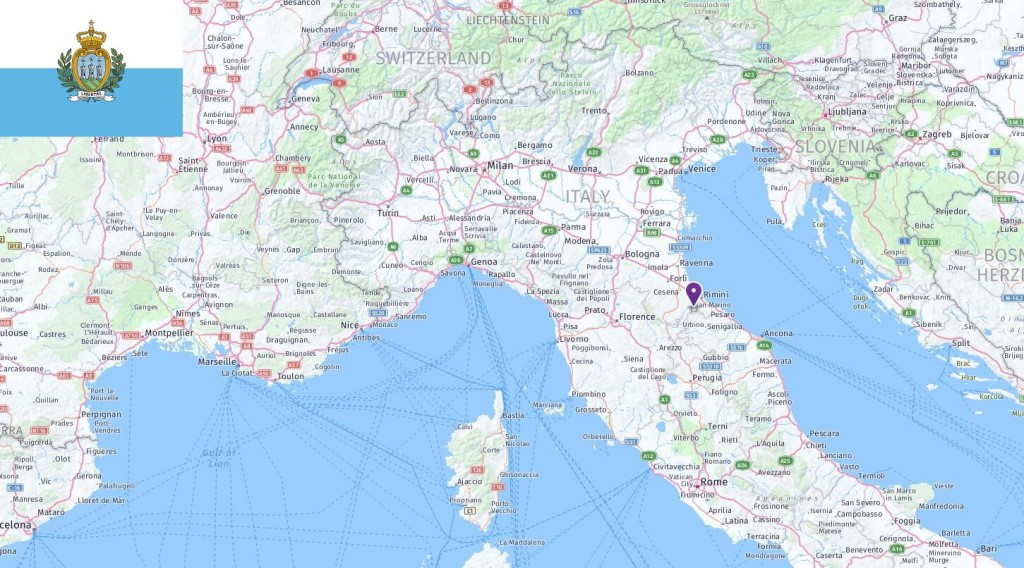 The most commonly used abbreviations about San Marino are SM which stands for San Marino and EUR which means Euro (San Marino currency). In the following table, you can see all acronyms related to San Marino, including abbreviations for airport, city, school, port, government, and etc. 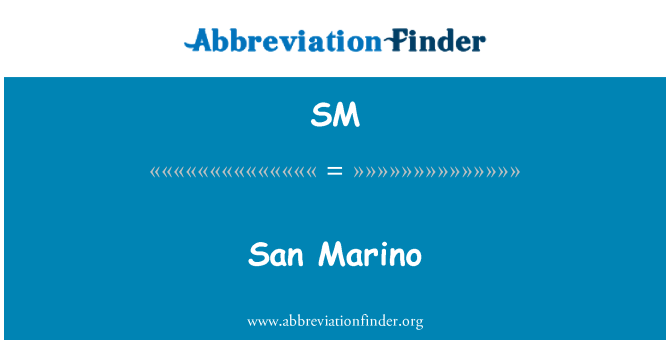 San Marino is located in a hillside of the Apennines totally enclosed by Italy. The country consists mainly of a mountain and the surrounding areas. The country’s highest peak is Monte Titano at 750 meters. The Ausa and Marano rivers flow through the low lying areas and flow into the Adriatic, while the San Marino river flows north and flows with Marecchia in Italy. The country has a mix of Mediterranean climate and a more continental, Central European climate. In winter, frost and snow can come, while summers are hot and relatively dry.

San Marino has relatively few climate challenges. Traffic and agriculture, especially in the nearby Italian areas, lead to some air pollution. The country’s agricultural areas have also declined as a result of urbanization in recent years.

The history of San Marino dates back to the early 300s, when st. Marino (San Marino) led a Christian congregation up the mountains to escape persecution. The congregation founded a monastery, which later became a fortress. A small village developed in the surrounding areas. The small fortress and village escaped occupation attempts from nearby states, and remained independent due to their isolated location in the mountains. San Marino got its first constitution in 1599, and in 1631 the pope recognized the country’s independence. When the Italian small states came together and formed a country in 1861, San Marino chose to remain independent.

Since 1862, San Marino and Italy have an agreement of eternal friendship and good neighborliness, which also guarantees that Italy protects San Marino militarily. The agreement was confirmed in 1939 and revised in 1971. San Marino is not a member of the EU, but entered into a customs agreement in 1993 with all EU countries. Since 2002, the country has also used the euro as the official currency. However, San Marino has its own membership in the Organization for Security and Cooperation in Europe (OSCE) and the Council of Europe, and became an independent member of the UN in 1992.

San Marino is a parliamentary-democratic republic. The country is the world’s oldest republic, and has retained much of its original Latin political system from 301. The country has two heads of state and government leaders called captains, elected by the Legislative Assembly every six months. Captain regents can only be re-elected after three years. The legislative assembly is elected in the general election for five years at a time. The Assembly elects a government and state Congress from its members. San Marino is closely linked to the Italian political system. The countries have a customs union, and it is Italy that safeguards the country’s international interests. The judicial system is also part of the Italian legal system.

San Marino has a well-functioning health care system and a highly educated population. Living standards are in line with the most prosperous parts of Italy. Women and men are equal within the law of the country, and after 1973 women have the right to be elected captain regents. Marriages between like-minded sanmariners are not allowed, but as of 2019, the country has allowed and recognized equal-sex partnerships.

San Marino’s economy is closely linked to the Italian. When the financial crisis, and the subsequent euro crisis, hit Italy’s economy, this had major consequences for San Marino. The country was forced to change the pension system, the tax system and cut public spending. After several years of budget deficits and declining gross domestic product, the economy has stabilized. Today, the country has very low unemployment and one of the world’s highest gross domestic product per capita.

Tourism and tourism is San Marino’s most important income, contributing over 50 percent of the country’s gross domestic product. The largest industries are banking, electronics and ceramics. San Marino was long known as a tax haven, but after the financial crisis, the country has opened the economy. Gradually, taxes have increased, and the country has signed a transparency agreement with Italy to get rid of its reputation as a tax haven. The main export goods are building stone, cheese, chestnuts, wine, woolen goods, ceramics, and handicraft goods. Over 90 percent of exports go to Italy. Other important revenue for the state is the sale of coins and stamps, both highly sought after by collectors and enthusiasts for their rarity.