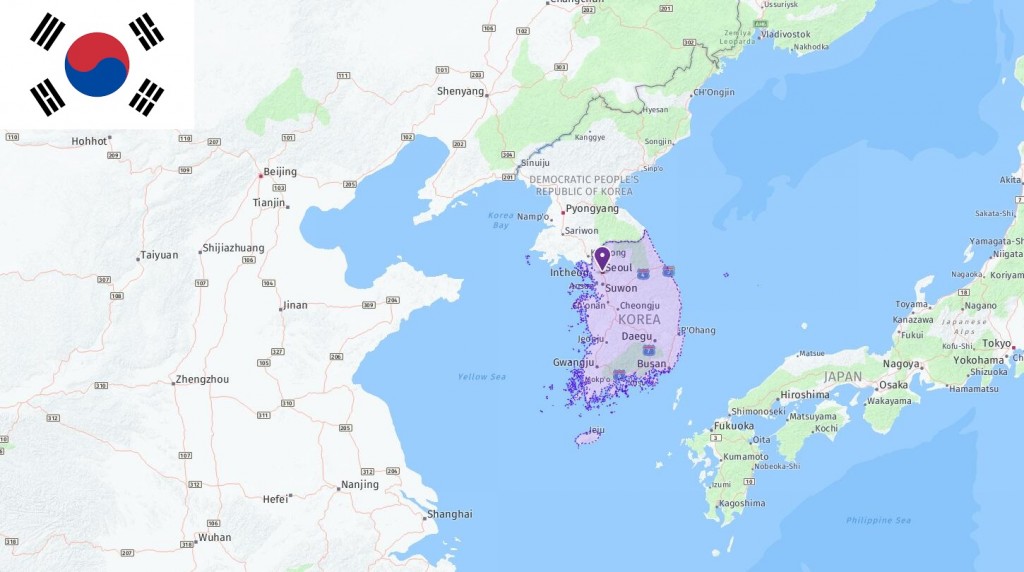 The most commonly used abbreviations about South Korea are KR which stands for South Korea and KRW which means Korean Republic won (₩) (South Korea currency). In the following table, you can see all acronyms related to South Korea, including abbreviations for airport, city, school, port, government, and etc. 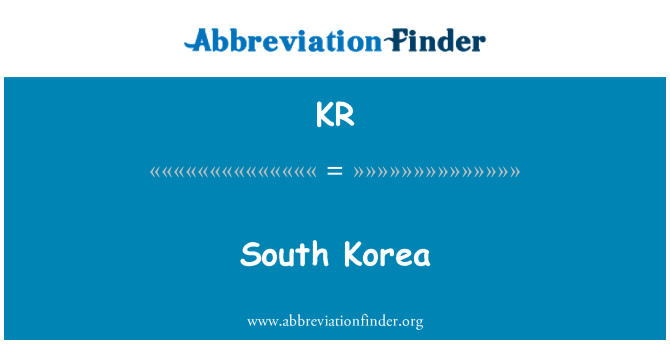 South Korea is a mountainous country on the southern part of the Korean peninsula. 70 percent of the land area is mountains. Along the east coast, the mountains plunge steeply into the sea, while in the west, in the shallow Yellow Sea, there are many islands and natural harbors.

The country has monsoon climate, with cold, dry winters and hot, humid summers. From late June to August, it is rainy, and more than half of the annual rainfall falls during this period. Only the southernmost parts of the country have pluses in winter. These areas are often affected by typhoons.

In recent years, South Korea has cut down a lot of forest, and the original forest areas are largely gone. Other environmental problems in the country include acid rainfall, overfishing and pollution of water as a result of factory spills. Air quality is also poor in the major cities. In addition, South Korea has the world’s ninth highest greenhouse gas emissions.

Korean civilization is more than 4,000 years old. Before World War II, the area was part of the country of Korea, which was gathered in the year 668. The geographical location between China and Japan has characterized history; for many centuries, China had the greatest influence over the Korean peninsula, but from the end of the 19th century Japan gained control. The country was a Japanese protectorate from 1905 until World War II ended.

The Korean War broke out in 1950 following North Korean aggression. While the United States and a United Nations-backed force defended South Korea, North Korea received military support from China and the Soviet Union. After three years, the war ended. The limit was almost unchanged and 2.5 million people had lost their lives. A peace agreement between the two states is not yet signed, and the border is a UN-administered, demilitarized zone.

The military dictator Park Chung-hee ruled from 1961-79. It was not until 1988 that protests forced democracy and a new constitution that guaranteed human rights.

South Korea is a unified republic, where the president is head of state and government. South Korea has been democratic since the new constitution in 1988, which strengthened parliament’s power over the president’s. The president still has a lot of power, and is sitting for five years, but cannot be re-elected.

The relationship with North Korea is a factor in politics and is also a democratic challenge. The National Security Act prohibits “hostile activities” and contact with North Koreans without the government’s permission. The law has long been used to restrict political activity and suppress the opposition. North Korea’s nuclear test blasts and rocket launches have led to tougher war rhetoric and hostile attitudes between countries over the past decade.

Close ties between politicians and various business leaders have been problematic in South Korea. Major corruption allegations have led to the previous two presidents being imprisoned for bribes and bribes. The previous president, Park Geun-hye, was the country’s first female president. She was sentenced to state court and sentenced a 24-year sentence following a major corruption scandal in 2016. In May 2017, Liberal Democrat Moon Jae-in was elected after two presidential terms with the Conservative government.

South Korea experienced tremendous economic growth after the Korean War in 1950-53, and has gone from being one of the world’s poorest countries to becoming one of the world’s largest economies. This has been done by combining state control with market economy, as well as having imported raw materials which they develop into various export goods. South Korea has little natural resources, and both imports and exports very much.

Today, the country is one of the world’s largest shipbuilding nations, and is also far ahead in the production of cars and various petrochemical and advanced electronic products. South Korea is also one of the leading fishing nations in the world, but that position is currently under threat due to overfishing.

South Korea’s economy is dominated by large, family-owned conglomerates called chaebol. Hyundai and Samsung are two of them. The country was hit hard by the Asian financial crisis in the late 1990s and by the international financial crisis of 2008-2009. Since then, the economy has stabilized again.