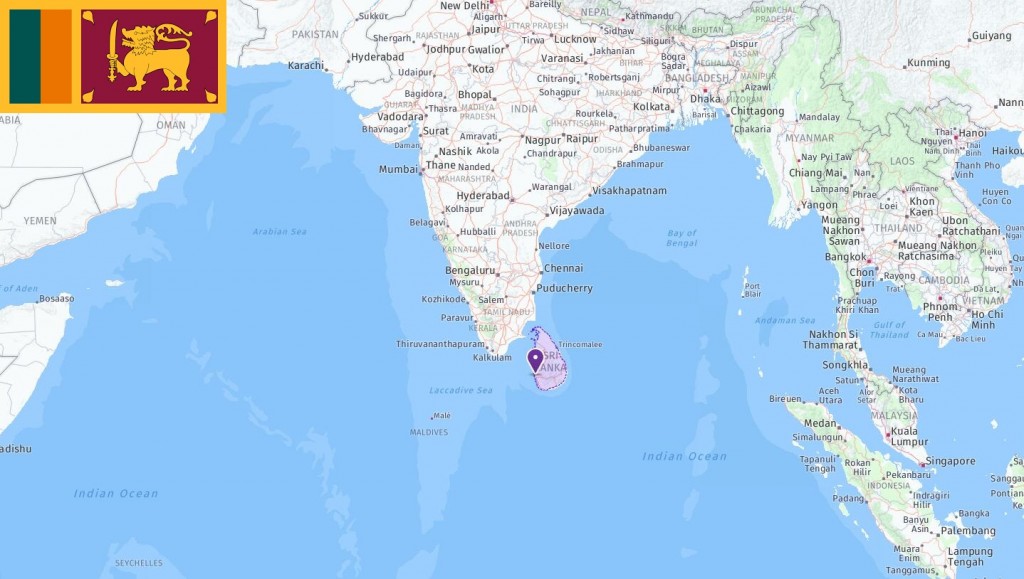 The most commonly used abbreviations about Sri Lanka are LK which stands for Sri Lanka and LKR which means Sri Lankan rupee (Sri Lanka currency). In the following table, you can see all acronyms related to Sri Lanka, including abbreviations for airport, city, school, port, government, and etc. 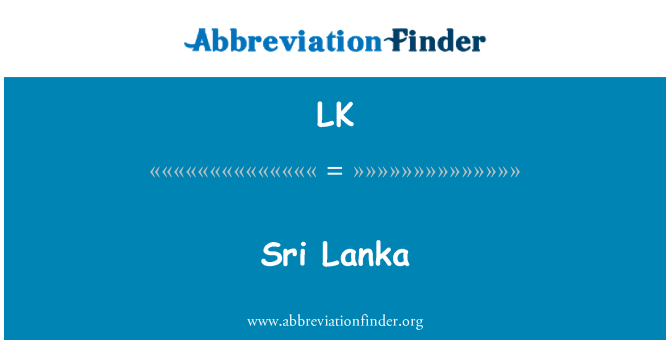 Sri Lanka is an island in the Indian Ocean. The landscape can be divided into three main types: rainy lowlands in the southwest, dry lowlands in the northeast and highlands in the south. The highest mountain, Pidurutalagala, is 2524 meters above sea level. Down from the mountains, rivers flow in many directions. Along the coast there are sandy beaches and lagoons. The climate is tropical and warm with little differences between seasons, but the temperature varies between the regions of the country. In the southwest it is warm and humid, in the north it is dry and very hot and in the highlands in the south it is colder. Monsoon rain gives the east coast rainfall in the summer, and the west coast rainfall in the winter.

Sri Lanka’s biggest environmental problem is rapid deforestation. This has led to soil erosion, destruction of natural animal habitats and increased flood vulnerability. In the 1970s, the authorities started a tree planting project. They have also prohibited harvesting of forests more than 1500 meters above sea level. Unfortunately, the measures have had little effect, and Sri Lanka’s forest continues to disappear.

The Sinhalese came to the island 2,500 years ago. They created a high culture and drove the indigenous people into the jungle. When the Portuguese arrived in Sri Lanka in 1505, there were two Sinhalese and one Tamil kingdom on the island. Despite fierce opposition from the inhabitants, the Portuguese colonized the island quickly. In the middle of the 17th century, the Portuguese were driven out by the Dutch, who were again defeated by the British towards the end of the 17th century. The British established large tea and rubber plantations, introduced monetary economics and forced the inhabitants to pay taxes. In response to the colonial power, a liberation movement emerged demanding independence.

It was not until 1948 that the country became an independent state in the British Commonwealth. Disgust between Sinhalese and Tamils ​​grew because the Sinhalese had special advantages: the official language was to be Sinhalese, and their religion, Buddhism, became official state religion. In order to fight for the rights of the Tamils, the radical movement of the Tamil Tigers (LTTE) arose, demanding an independent Tamil state. From 1983-2009, the country was ravaged by civil war because of the conflict between the Sinhalese and the Tamils, where more than 70,000 people died.

Sri Lanka is a democratic republic with universal suffrage. The President and the National Assembly are elected every five years. The 1978 Constitution gives the president a lot of power – the president elects the prime minister, is the army chief and can dissolve the national assembly after four and a half years. Although Sri Lanka is initially democratic, democratic problems such as abuse of power, corruption, electoral fraud and political repression have occurred.

The conflict between the authorities and the Tamil Tigers (LTTE) has characterized politics. After several peace processes, the war ended in 2009, when the government forces fought the Tamil Tigers. A political solution to the conflict has failed. The international community has criticized Sri Lanka for human rights violations during the civil war.

Poverty has been reduced in recent decades, but many are still poor. Compared to other countries in the region, Sri Lanka has a relatively good welfare system, and several health services are free. Women have a weak position in society and are discriminated against in the work and education system. Tamils ​​and gays also experience systematic discrimination.

Sri Lanka’s economy was previously based on agriculture and simple industry. In the 1970s, tea, coconut and rubber accounted for 90 percent of export revenue, but today these goods make up only 20 percent of exports.

The textile industry, the service sector and the construction industry have taken over, and today generate large revenues. Tourism is another important source of income, and the peace in 2009 has given the tourism industry a boost. In addition, many work abroad and send money home to Sri Lanka.

After the peace, foreign companies have also become more interested in establishing themselves in Sri Lanka. Since the 1950s, export earnings have not been able to cover imports. Thus, Sri Lanka has borrowed money and this has given the country large foreign debt.

The economy is largely controlled by lending institutions such as the International Monetary Fund (IMF) and the World Bank. These have, among other things, demanded that the country privatize and cut back on the public sector. Unemployment in Sri Lanka has declined over the past few years, but youth unemployment remains a problem.