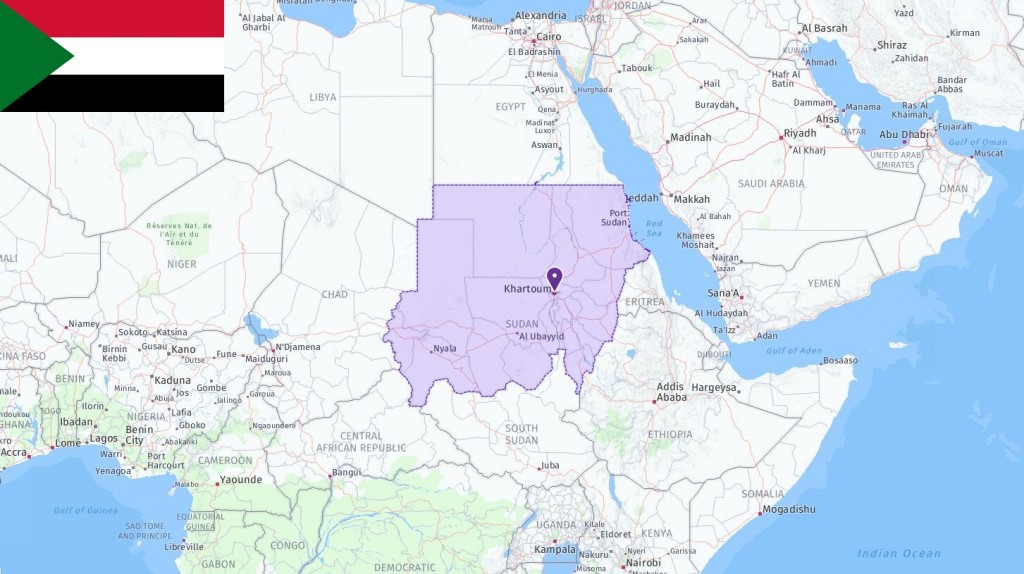 The most commonly used abbreviations about Sudan are SD which stands for Sudan and SDG which means Sudanese pound (Sudan currency). In the following table, you can see all acronyms related to Sudan, including abbreviations for airport, city, school, port, government, and etc. 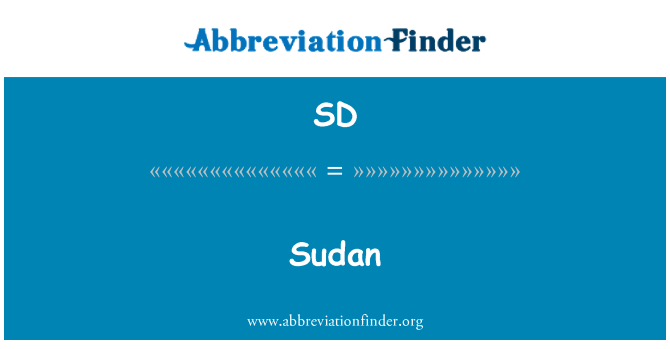 The northern part of Sudan consists of large, barren desert areas. In the southern areas, the desert turns into semi-desert and plains. Small mountain ranges cut through the plains in several places, forming a natural boundary to the Ethiopian highlands in the southeast and Chad in the southwest. The Blue and White Nile meet centrally in the country and flow further north toward Egypt. Along the river banks there is a narrow strip of fertile agricultural land through the otherwise arid desert areas. The climate in Sudan varies from arid desert climate in the north to tropical and humid in the southeast. Temperatures are consistently high and can reach up to 50 degrees at the warmest. The greatest seasonal variation is the rainfall that comes during short rainy seasons in the south. The northern part of the country receives little to no rainfall.

Sudan is very prone to drought. The country is completely dependent on the small rainfall that comes, and in case of deviations the consequences can be huge. The country’s biggest environmental challenges are lack of fresh water, soil erosion and desertification. Extensive hunting threatens the country’s natural diversity and wildlife.

Around 2500 BCE the kingdom of Kush was established in today’s Sudan. During periods of the kingdom’s heyday between 1000 BCE. to 400 AD, Sudanese kings and pharaohs ruled over both Sudan and Egypt. Beyond the 400s, the area was divided into several smaller Christian kingdoms, but from the end of the 600s, invading rulers forced the Christian states to convert to Islam. Throughout the 19th century, then, the kingdoms became subject to Ottoman-Egyptian control of military support from Britain, and from 1898 until the country became independent, it was ruled by Egyptian-British cooperation.

Since independence in 1956, Sudan has been characterized by civil war. After millennia of different influences, kingdoms and religions, there were great differences between the regions and the people of the country. In the south, civil war broke out between the Muslim (northern) government and the mainly Christian and animist population in the south. With the exception of some interruptions, the war lasted until 2005. In 2011, Sudan was divided into two, Sudan and South Sudan.

Since 2003, Sudan has also been characterized by a civil war in the province of Darfur. Like the one in South Sudan, the war has its roots in the ethnic, cultural and religious differences within the country.

Sudan is formally a republic where a president is elected every five years. The President is both Head of State and Government. In reality, the country has been a dictatorship since a military coup in 1989. Press freedom in the country is poor, and there are frequent violations of the human rights of the population.

The policy is largely influenced by the ongoing conflicts in the country and the relationship with the newly created neighboring South Sudan. Following South Sudan’s secession in July 2011, the parties have not yet agreed on the sharing of borders and the distribution of Sudan’s debt and natural resources such as oil and water. The country’s many conflicts have resulted in millions of people fleeing both internally and in neighboring countries. Sudan lacks significant infrastructure such as roads, power supply, and the sanitary conditions are very poor. In addition, government institutions such as the judiciary and the police, the education sector and the health care system perform very poorly.

Women’s rights are poor, and genital mutilation is a widespread practice throughout the country. During the many internal conflicts, rape has been used as a power strategy, and many, especially non-Muslims, have been forced into slavery.

Sudan has long been one of the poorest and least developed countries in Africa. Extensive drought in the 1980s worsened the situation, damaging the already vulnerable agricultural industry. After the country began exporting oil in 1999, the economy began to grow, and living standards among the population increased. However, growth slowed in 2011 when South Sudan became independent, as most of the oil deposits were in the south. The economic downturn led to high inflation, and strong tightening policies to large protests from the population. The country’s oil revenues are unevenly distributed, and inequalities between poor and rich increase. Agriculture is the industry that employs the most and which feeds the majority of the population. Corruption and tax fraud are widespread in all business sectors.

Sudan has widespread poverty, with around 47 percent of the population living below the national poverty line. The government has managed the oil revenues irresponsibly, and the country remains dependent on international aid.