Tallinn is the capital of Estonia and is not without reason best known for its medieval buildings. The entire historic center is on UNESCO’s list of protected places. Tallinn has historically been known for its fine ports as well as having been a major marketplace since the 9th century.

Don’t think of Tallinn as a gray and sad city. Here, optimism and faith in the future prevail. At the same time, the population is committed to preserving the true Estonian. In addition, Tallinn has a myriad of shops, bars and restaurants. The weather in Tallinn is usually good too. From May to September it is good summer temperature.

On the weekends there are many tourists from the Nordic countries, not least people from Finland, who travel to Tallinn to shop and party. This is no wonder, since Tallinn is only 8 kilometers south of Helsinki. It is easy to take day trips to and from Helsinki with fast-moving boats. It’s cheap too. Tallinn is Estonia’s most important port city.

Get charmed by the cobblestone streets of Tallinn, which was one of the Hanseatic cities. Tallinn’s history is fascinating, and streets and buildings are testimonies of earlier times. We highly recommend Tallinn.

Get to know Tallinn

Tallinn has approx. 450,000 inhabitants. The official language is Estonian, but Russian is also widely used. Estonia has been under the rule of other countries many times throughout history. Tallinn was the Hanseatic city from the 13th century and almost until the 16th century. In the early 18th century, Tallinn became part of Russia. During World War I, Tallinn was first occupied by the Germans, and then occupied by the Soviet Union. After the dissolution of the Soviet Union in the early 1990s, Estonia became independent again.

Tallinn consists of eight administrative districts, but for visitors it will be more useful to divide the city in a different way. Centrally located is Tallinn’s historic center. The main attractions are here. This historic center consists of an upper and a lower district, but historically there were two different cities. The upper part is called Toompea, which means something like Domberget. In the 12th century, this was the town’s citadel. Toompea has been the symbol of power at all times for the various foreign powers that have invaded Tallinn. Tradition said that the country it is flagged for on the tower at the top of Toompea is the country that governs Estonia. The lower part of town is called the Old Town in short.

This area was once home to the bishops and elite of Estonia. The main attractions are the Russian Orthodox Church (Alexander Nevsky Cathedral) and the Lutheran Cathedral (Toomkirik). To get to Toompea, start in Harju Street. This one goes to the street Müürivahe. Many of the buildings in Harju were destroyed by the Russians during World War II, but are being rebuilt today. Toompea is located on a ridge that extends 48 meters above sea level. In other words, you get a great overview of the city from Toompea. In particular, let’s mention the viewing platform at the start of Kohtu Street. From here you see St. Nicholas Church and St. Olaf Church. You will also be able to look beyond the new urban areas such as Pirita and Kadriorg.

This urban area is one of the best preserved in all of Europe, and renovations are ongoing. The old town can historically be documented to 1154 and was originally a separate city. It was not until 1889 that the district was merged with Toompea. The old town was among other places the Hanseatic abode. The natural centerpiece and all of Tallinn’s “heart” is the town hall square (Raekoja place). It is charming and cozy, and a starting point for walks along the city walls and city towers. See, among others, the St. Olaf Church tower, which is 124 meters high and a landmark in the city.

The main streets in the lower town are Lai, Pikk and Vene. Along the street Lai you will find many very well preserved medieval buildings. See, among other things, Tallinn City Theater (Lai 23) and Hueck’s House (Lai 29). The street with the somewhat strange name of Pikk is the longest street in old Tallinn. It runs from the foot of Toompea and extends all the way to the harbor. A “must” is to visit the house of “Blackheads”, located at No. 26. This house was thoroughly renovated in the 16th century and appears in a great Renaissance style. The portraits above the windows are of the Polish-Swedish king Sigismund III and his wife.

The street Vene is important because it passes through the city museum (Vene 17) and not least the Dominican monastery (Vene 16). Historically, the street Vene was the junction between the market and the district where the Russian merchants lived in the Middle Ages. St. Nicholas Church (Vene 24) stands on a square that has housed Russian churches since the 13th century.

Today, this is an exclusive seafront area, with large greenery. The entire area is centered around the elegant garden area and the associated palace that once belonged to Peter the Great. Peter the Great (1672-1725) was a Russian czar. Today, the palace houses the National Art Museum, in addition to serving as a great recreation area, highly valued by the locals. Kadriorg is located 2 kilometers east of the city center. The area also has a 54 meter high fire tower with a viewing platform at the top. Here you get a great view of Tallinn.

Northeast of Kadriorg you will find the Pirita area. You are now at the coast and marina that were built in connection with the 1980 Moscow Olympics. In this area (about 2 kilometers from the port area) you will find the Tallinn Botanical Gardens, as well as the 314 meter high TV tower.

Taxis are affordable in Estonia and Tallinn, and you can catch buses and trams from early morning until midnight. Tallinn is a relatively safe city. As in all major cities, you must pay attention to pickpockets. Also, avoid walking alone in the dark, narrow alleyways of Old Town at night.

Tallinn is both the capital and the largest and most populous city in Estonia. Tallinn is naturally the national center of economy and culture, and a number of tourists visit this charming city all year round. 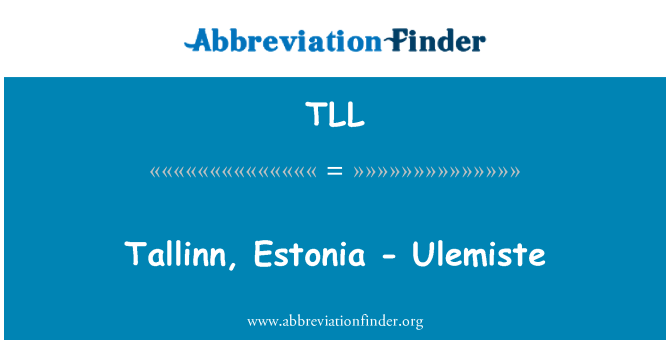 The most commonly used abbreviations about Tallinn is TLL which stands for Tallinn. In the following table, you can see all acronyms related to Tallinn, including abbreviations for airport, city, school, port, government, and etc.