What is the abbreviation for Utah state? The state of Utah is located in the southwest of the United States and borders on the states of Nevada, Idaho, Wyoming, Colorado, New Mexico and Arizona. The name of the state comes from the Indian tribe of the Ute who was based here. The state’s nickname is Beehive State and its motto is Industry.

Utah is famous for its unique landscape, such as the Delicate Arch in Arches National Park. The federal stat covers an area of ​​219,887 km² – with only about 2.76 million inhabitants. The state capital is Salt Lake City with approximately 186,000 inhabitants. The area was populated from 1847 by Mormon followers of The Church of Jesus Christ of Latter-day Saints. They still make up a large portion of the Utah population and have a significant impact on all of Utah’s social, cultural, legal, and political life.

On January 4, 1896, Utah was declared the 45th state of the Union. In addition to the beautiful landscape, Utah is famous for outdoor activities all year round. Most Utah residents live in the central northern part of the state around the capital, Salt Lake City. This part of the state where approximately 80% of the total population lives is called the Wasatch Front. Utah’s economy is primarily based on two pillars, firstly mining – copper, petroleum, uranium ore, gold, salt, silver, lead and iron are mined, and secondly on tourism. As already mentioned, the north of the state is the most popular part, whereas the west is dominated by dry deserts, such as the Great Salt Lake Desert. The northeast is considered an excellent ski area and the south and southwest is the area of ​​the national parks and especially the exciting rock formations. All state visitors are encouraged to exercise caution when it comes to alcohol consumption, as Utah is known for its strict alcohol laws. In 2002 the 19th Winter Olympics took place in Salt Lake City.

The Mormon religious community is correctly called “The Church of Jesus Christ of Latter-day Saints”. It was founded by Joseph Smith (1805-1844), who claimed that he met God and Jesus in the forest in 1820. Three years later he is said to have met a heavenly being who had revealed himself to him as God’s messenger with the name Moroni. The being had commanded him in the name of God to translate gold plates into English, which would then contain the “abundance of the everlasting gospel.” The plates were hidden in a hill near Manchester, New York September 1827 made the plates and, as instructed, made a translation of them, known as the “Book of Mormon”. With the financial support of his neighbor Martin Harris, the translation of the gold plates – the Book of Mormon – was printed in an edition of 5,000 copies in early 1830 and published on March 26, 1830. Harris and two other men testified that they had seen the gold plates. Shortly thereafter, on April 6, 1830, Joseph Smith and six others founded the Mormon community.

Joseph Smith was the fourth of eleven children. His strictly religious parents worked as traders and farmers, but also took part in the treasure hunt, whereby Joseph claimed that he could discover hidden treasures with the help of a “seer stone.” Smith had had several women since 1931 – from 34 to 40 by 1844 After he was suspected of treason, he was held in Liberty Prison in Missouri from December 1838 to April 1839. After his release, he founded the city of Nauvoo in Mississippi, Illinois, in 1839 and became the mayor there. As mayor, he ran for President of the United States in 1844. When the newspaper “Nauvoo Expositors” claimed that his lifestyle was offensive and that he was a false prophet, in 1844, with the support of the city council, he had the newspaper’s printing blocks and printing press destroyed. This restriction on press freedom prompted the Illinois governor, Thomas Ford, to have him arrested.
On June 27, 1844, Smith was shot as an inmate in Carthage while trying to escape. As mentioned, from 1847 the members of the church he founded began to settle in the state of Utah.

Salt Lake City
Salt Lake City with its approximately 186,000 inhabitants is the capital of the state of Utah and its largest city. Around 1.1 million people live in the Salt Lake City metropolitan area. The city was founded in 1847 and is considered the capital of the Mormons, even though only less than 50% of City’s Salt Lake residents actually belong to this belief. But whoever visits the city’s Temple Square will be able to explain this. In addition to its museums and other cultural institutions, Salt Lake City is very popular as a starting point for excursions to the nearby ski areas.

Cedar City
The city of Cedar City in southwest Utah has approximately 20,000 residents and was founded in 1851. The city is also considered a student city, as it is home to Southern Utah University with approximately 8,000 students. The city’s landscape is perfectly “squeezed” between mountain ranges and the Dixie National Forest. Since the city is also not far from the Cedar Breaks National Monument and the Zion National Park, it is a good starting point for excursions to these natural beauties. Furthermore, the very worth seeing Cottonwood Canyon is not far from Cedar City. Cedar City is also known for the annual Utah Shakespeare Festival.

Logan
The city of Logan, with approximately 50,000 residents, was founded in 1859 and is located in northern Utah on the Wasatch Front. Logan is also considered a student city with Utah State University and its approximately 23,000 students. Those who come to Logan can choose from a wide range of fresh air activities. Be it hiking, cycling, climbing, kayaking, skiing or fishing. Up to now, Logan has not been very touristy so you can do all of these activities in relative calm. But fans of theater and museums will also find something in Logan.

Moab
Moab has only about 5,000 residents and is located in eastern Utah. The city was founded in 1878. Although Moab has very few inhabitants, the city, unlike Logan, is known as a tourist city. This is due to the proximity to Arches National Park and Canyonlands National Park. Moab is also an excellent place for mountain bikers. Due to the beautiful landscape around the city, Moab has also appeared in numerous films and series such as Thelma and Louise, Indiana Jones, Baraka, Mission Impossible and MacGyver.

Orem
Orem has approximately 88,000 residents, making it the sixth largest city in Utah. The city is located in northern Utah on the Wasatch Front. Orem, now considered one of the most family-friendly cities in the United States, was founded in 1877. Utah Valley University is also located in the city.

Ogden
The city of Ogden is located in the north of Utah in the Wasatch Front and has approximately 82,000 inhabitants. Ogden was founded in 1844. Ogden is known for the abundance of historical buildings that are located in the city. Museums and theaters also offer themselves to those interested in culture in Ogden.

Park City
The city of Park City, with approximately 8,000 residents, is located in northern Utah and is considered a resort and visitors to the city far exceed the number of those who live here. Park City was founded in 1870. Today there are 3 large ski areas and in 2002 the Olympic competitions of snowboarders took place here. The internationally known independent film festival “Sundance Film Festival” also takes place in Park City. Park City was also the location for the film “I know what you did last summer”.

Provo
The city of Provo is located south of the Great Salt Lake and is the third largest city in Utah with approximately 112,000 inhabitants. The ice hockey games were held here during the 2002 Winter Olympics. The city is also home to Brigham Young University, the third largest private university in the United States. Those who are not interested in the city’s theaters and museums can also choose Provo as an excellent starting point for tours in beautiful nature around Provo.

St. George
The city of St. George has approximately 73,000 residents and is located in the far southwest of Utah. The city was founded in 1861 and is now one of the fastest growing cities in the United States. The city is very scenic and is located on the edge of the Mojave desert.

The most commonly used abbreviations about Utah are UT which stands for Utah. In the following table, you can see all acronyms related to Utah, including abbreviations for airport, city, school, port, government, and etc. 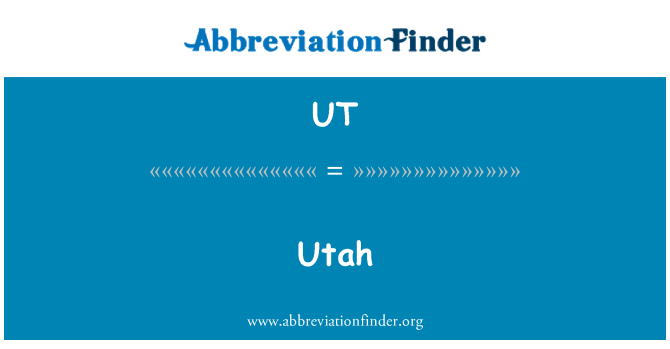