Many people believe that Warsaw is a sad and gray eastern bloc city, characterized by communism and gloom. Let it be noted that the suburbs are not exactly a delight, but the historic districts of the Polish capital have been carefully reconstructed after the merciless ravages of the Nazis.

Today it is a real pleasure to stroll around Warsaw, and you get very good value for money in Poland compared to other EU countries.

If you take the time to read about Warsaw’s history before you arrive, you will find that the city is one of the most fascinating destinations in Europe.

Warsaw can be visited at any time of the year, but shows off its best side in the summer. Winters can be acidic and cold.

Several airlines bring you directly to the capital of Poland in less than two hours. In other words, Warsaw is an original, easily accessible and interesting choice if you want to have an exciting and cultural weekend without costing much money.

Get to know Warsaw

Warsaw is Poland’s capital and the country’s largest city with approx. 1.7 million inhabitants. Originally, Warsaw was a small fishing settlement by the Wisla River in the 9th century. As late as the 13th century, Warsaw was founded as a city. 300 years later, Warsaw became the capital of what was then one of Europe’s largest countries by far.

Poland got Europe’s first written constitution in 1791, just before it was divided between Russia, Prussia and Austria, and disappeared from the map.

For the next 125 years, the Russians did everything to suppress and ban Polish language and culture. The Poles regained their independence in 1918, and Warsaw flourished, nearly doubling its population to 1.3 million in the interwar period. During this period, Warsaw was a green and fashionable metropolis and was called Eastern Europe’s Paris.

Almost no other city in the world was hit harder during World War II than Warsaw, neither materially nor in the loss of human life. All the city’s Jews, hundreds of thousands of people, were forced to move and then massacred. In total, about 60% of the city’s population lost their lives during the war years, and 85% of the buildings were systematically destroyed and destroyed, quarter by quarter. In 1945, several square miles of the city was only a smoking heap.

Poland came under communist rule, and it turned out that over 21,000 officers, leaders and intellectuals had been executed by the Russians during the war to give them easier control over the country. It was not until the 1990s that the truth about the Katyn massacres became known.

In the years 1947-1961, the city’s historic center was extensively recreated after old drawings and photographs. When you walk around the Old Town today, everything looks like it did 200 years ago, and it’s hard to understand that almost none of the buildings are older than 50-60 years. The entire area is on UNESCO’s World Heritage List.

The residential areas, on the other hand, are by no means as picturesque. After the end of the war, hundreds of thousands of the city’s inhabitants stood without a roof, and large concrete blocks of flats were almost thrown up as quickly and efficiently as possible. In 1980, the Solidarity movement started in Gdansk and became the spearhead of the fall of communism. Poland became the first country in Eastern Europe to reject communism, and in November 1990 Lech Walesa won the first free democratic presidential election. In 2004, Poland became full members of the EU.

The river Wisla (also called Vistula) divides the city into two. The vast majority of tourists choose to stay in the historic districts of the West Bank, which consists of the Old Town (Stare Miasto) and Nybyen (Nowe Miasto).

The Old Town dates back to the 15th century. The buildings were systematically destroyed by the Nazis during World War II but are painstakingly rebuilt. The entire Old Town is on UNESCO’s World Heritage List. In summer, the Old Town flourishes and offers outdoor concerts, art exhibitions and theater productions. Several nice cobblestone alleyways lead you down to Vistula’s river banks, to the city walls or to a terrace overlooking the river and the city’s eastern parts.

The heart of the old town is the Market Square (Rynek Starego Miasta) with its colorful medieval buildings and many outdoor restaurants. On the north side is the Warsaw Historical Museum, which is certainly recommended, not least because of an informative film about Warsaw’s destruction and reconstruction. It appears in English at 1200 every day. In the middle of the square was originally the town hall, but now you will find a fountain with a statue of a mermaid, Warsaw protector and symbol. According to legend, two mermaid sisters lived in the Baltic Sea; one swam south up the Vistula and ended up here in Warsaw, the other swam westward and sits to this day on a rock outside Copenhagen.

The old town is surrounded by ancient city walls, along which you will find the magnificent Gothic Cathedral of St. Janas, the Royal Palace and Barbakan Warszawski, the fortress that defended the city gate against invaders.

From the Old Town Castle Square, the four kilometer long Royal Road extends south to the park complex at Wilanow Castle. Along this route you will find most of Warsaw’s sights, and you will have the opportunity to familiarize yourself with the city’s culture and history. The northernmost part consists of Warsaw’s leading shopping streets, Krakowskie Przed Miescie and Nowy Swiat. The southernmost and longest section is Warsaw’s perhaps most elegant avenue, Al. Ujazdowskie, with historic buildings, embassies, government buildings and large beautiful parks.

The modern city center and Muranow

The royal road is crossed by what can be said to be the main street of Warsaw’s modern center. Eel. Jerozolimskie is a large wide thoroughfare that leads west to the city center and one of Europe’s largest squares. The square is dominated by Poland’s tallest and Europe’s fifth tallest building, the 234 meter high Palace of Culture and Science. This landmark is great for tourists to orient themselves. It was built in the early 50’s and was long hated by Warsaw’s inhabitants. It had the names Stalin Palace and Vertikalbrakka, but now houses congress halls, concert halls, a cinema complex and several museums.

North of the city center, and west of the Old Town, lies Muranow, where the Jewish ghetto was once located. The area was completely pulverized during the war, and today there is not much to see here, other than disturbing monuments and monuments. Warsaw had Europe’s second largest Jewish community. More than 350,000 Jews were locked up behind a wall during these quarters, pending deportation to the Treblinka gas chambers. Even before deportation, a third had died of hunger, illness and exhaustion.

In the south of Warsaw you have the Wilanow district. The district is best known for Wilanow Castle, which was the second residence of the Polish kings. The castle is also called the Versailles of Poland, and today is a museum that is open every day except Tuesdays. The park surrounding the castle covers over 43 hectares and has several beautiful gardens, in both Chinese, Neo-Renaissance and Baroque style.

East of Vistula lies the district of Praga. Here are few sights except for Warsaw Zoo, St. Michael’s Cathedral and the Orthodox Church of Mary Magdalene with its Byzantine loop domes. Praga is the district that came most unscathed from the ravages of the Nazis, because here the Russian forces were instead waiting for the Germans to crush the rebels and withdraw. For that reason, Praga is the place where you can still see Warsaw’s original pre-war architecture. This is where Roman Polanski recorded large parts of the movie success of the Pianist. You will find several cafes, galleries, art studios and theaters in Praga.

Warsaw is one of the most visited cities in Poland from the tourists’ point of view. Warsaw is also Poland’s capital and the largest city in Poland. 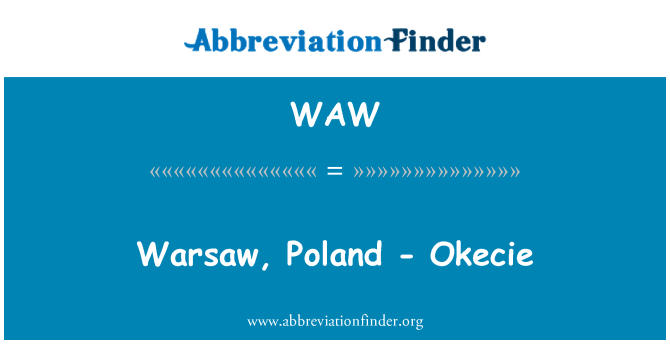 The most commonly used abbreviations about Warsaw is WAW which stands for Warsaw. In the following table, you can see all acronyms related to Warsaw, including abbreviations for airport, city, school, port, government, and etc.