What is the abbreviation for Wisconsin state? The name Wisconsin is derived from an Indian expression meaning “the place where we live”. The Frenchman Jean Nicolet is considered the discoverer of the Wisconsin region in 1634. And in 1763 the area was handed over to British sovereignty. Wisconsin was declared the 30th state in the Union in 1848. Because of its pronounced dairy industry, the region is nicknamed “American dairy country” (america’s dairyland) or cheese and dairy state – which is why the residents are jokingly known as “cheese heads” (cheeseheads).

Wisconsin covers an area of ​​169,639 km² – with around 5.7 million inhabitants. The state capital is Madison. Although the state is more known by nature than culture, Butch Vig (born 1957 in Viroqua, Wisconsin) is a drummer and member of the alternative rock band “Garbage” or Justin Vernon (born 1981 in Eau Claire), among others Father of the folk song project “Bon Iver”. The name Bon Iver for the project comes from the French ‘Bon hiver’ (= good winter). Bon Iver was brought across the borders of Wisconsin and the USA by the album “For Emma, ​​Forever Ago” from 2007. Vernon had produced the album all alone in the loneliness of a hunting lodge in Wisconsin. It is also worth mentioning that about half of the inhabitants have German roots.

Madison
The second largest city in the state with around 222,000 inhabitants is also its capital. Madison receives a lot of praise from visitors and locals and is considered the friendliest city in the USA due to its bike-friendly streets, the US-wide unparalleled environmental friendliness and the great tolerance for alternative ways of life, such as that of vegetarians or gays and lesbians. The city stretches across the narrow headland between Lake Mendota and Lake Monona. The mixture of contemplative state capital and intellectual university city is what makes it so special. In the center of the city is the Wisconsin State Capitol on State Capitol Square, which becomes Dane County Farmers Market every Saturday. The market is one of the largest of its kind in the United States and is particularly known for its hand-made cheeses and other local dairy products. State Street running west from Capitol Square leads directly to the University of Wisconsin and is lined with numerous cafés and bars as well as coffee shops selling fair trade coffee.

Another highlight of this street is the Museum of Contemporary Art. The university campus is also worth a visit. In addition to an outdoor bar, the Memorial Union in particular offers free film screenings and live music. Also recommended are the numerous cycling and hiking trails around the lakes, which are ideal for relaxing.

Appleton
The city of Appleton has nearly 80,000 residents and is located in the east of the state of Wisconsin. It is crossed over Fox River, where it was founded in 1835 to trade with the locals. Appleton is considered extremely family friendly and one of the best places to live in the United States. Numerous restaurants, shopping streets, art exhibitions or theatrical performances provide cultural variety. Appleton is also home to Lawrence University.

Eau Claire
The capital of Eau Claire County in western Wisconsin has approximately 62,000 residents. Part of the city is located in Chippewa County, named after the river of the same name, which also flows through Eau Claire. The concert shell in the urban Owen Park is worth seeing. Eau Clair has a reputation for being an attractive city, especially for young people.

Green Bay
The city of Green Bay lies at the mouth of the Fox River in Lake Michigan at the southernmost point of Green Bay and has around 100,000 inhabitants. It was founded around 1660 as a fur trading post and over the years developed into a port city on Lake Michigan and is now an important industrial city in the region and the terminus of the rail network in the Midwest. Football plays a very big role here for the residents of Green Bay, which is certainly not least due to the fact that the Green Bay Packers are the only team in the professional league that is not profit-oriented and is owned by the community. In the Green Bay Packer Hall of Fame, numerous testimonials of the local football fever can be admired and you get the opportunity to visit the stadium.

Janesville
The city, founded in 1835, is located on the Rock River in southern Wisconsin and has around 62,000 inhabitants. The origin and name of the city can be traced back to a man named Henry Janes, who made the first regular ferry service across the Rock River possible. The historic architecture of the city center is particularly worth seeing.

Kenosha
Kenosha is the fourth largest city in Wisconsin with approximately 95,000 inhabitants and the administrative center of Kinosha County. It is located in the far south of the state directly on the shores of Lake Michigan. The lakeside parks are ideal for long walks or bike rides, and guided fishing trips on Lake Michigan are also available. Also worth seeing is the historic city center, which is accessible through an old tram network.

La Crosse
This tranquil city is at the mouth of the La Crosse River in the Mississippi. The historic core of the city, founded in the 19th century as a supply and trading point, with its numerous restaurants and pubs is particularly attractive. From the Grandad Bluff east of the city you can enjoy an excellent view of the landscape, especially the river.

Milwaukee
Milwaukee is the largest city in the state of Wisconsin with approximately 600,000 inhabitants. In the past, the city was strongly influenced by flows of immigrants from Germany, which moved to the United States in the 1840s. They established numerous breweries here, so that over time beer became the most important branch of industry in the city and it was nicknamed “Brewery City” or “Pub of the Nation”. The city’s very multicultural character today was shaped by later waves of immigration from Italy, Poland and Ireland, as well as by Mexicans and African-Americans. Nevertheless, Milwaukee has to contend with the reputation of being an old workers city today. The city has a lot to offer! In addition to the Art Museum and the Harley-Davidson Museum, with an associated factory, there are numerous opportunities to experience culture and leisure. For example, there are numerous bars and restaurants as well as elegant shopping areas. The Lakefront park on Lake Michigan invites you to relax, where festivals are held almost every weekend in the summer months.

Oshkosh
The city of Oshkosh has around 63,000 inhabitants and is located at the mouth of the Fox River in Lake Winnebago. The city’s largest event is the EAA AirVenture Oshkosh, an air show in which around 800,000 visitors are admired annually by around 800,000 visitors. In addition to the well-kept historical buildings, you can enjoy culture in Oshkosh. Museums, theaters and first-class restaurants are a reason to visit this city in addition to fishing trips and boat tours.

Racine
The industrial city in the south of the state directly on Lake Michigan is the administrative center of Racine County and has a population of approximately 82,000. The city may seem inconspicuous at first, but there are two of the masterpieces by architect Frank Lloyd Wright. For both of the sights, it is necessary to book the tours, which last approximately 45 minutes, in advance. The first is the Johnson Wax Company Administration Building and the so-called Wingspread, both of which were commissioned by Robert F. Johnson, the owner of SC Johnson & Son, Inc.

Waukesha
Waukesha has a population of around 70,000 and is located in the south-east of Wisconsin in Waukesha County, the administration of which is located here. The historic city center with many boutiques, restaurants and pubs is just as worth seeing as the Frame Park along the Fox River on the banks of which the center of this city is located. From here, a trip to the northeast of the city of Pewaukee Lake, which offers a varied leisure program such as bathing beaches and boat tours, is worthwhile. Another historic highlight is Carrol University, which was called Carrol College until 2008 and, with its founding year in 1846, is the oldest university in Wisconsin.

West Allis
West Allis is part of the Milwaukee metropolitan area and has a population of 61,000. Major attractions include the Wisconsin State Fair Park, home to the Miwaukee Mile, a car racing circuit, and the Milwaukee County Zoo on the northern outskirts.

The most commonly used abbreviations about Wisconsin are WI which stands for Wisconsin. In the following table, you can see all acronyms related to Wisconsin, including abbreviations for airport, city, school, port, government, and etc. 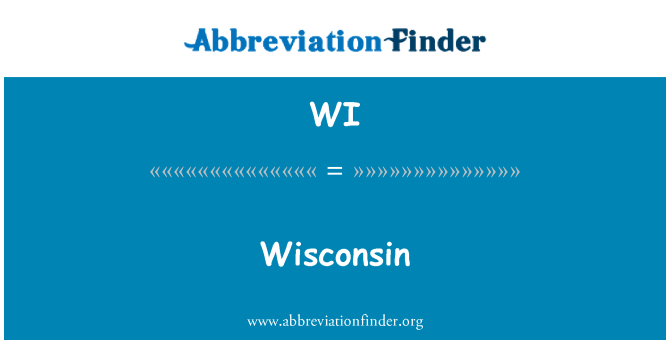