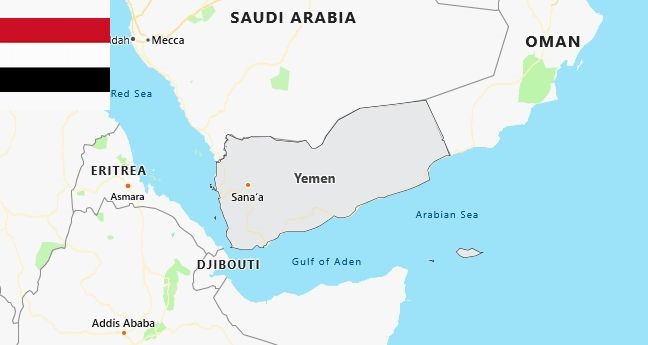 The most commonly used abbreviations about Yemen are YE which stands for Yemen and YER which means Yemeni rial (Yemen currency). In the following table, you can see all acronyms related to Yemen, including abbreviations for airport, city, school, port, government, and etc. 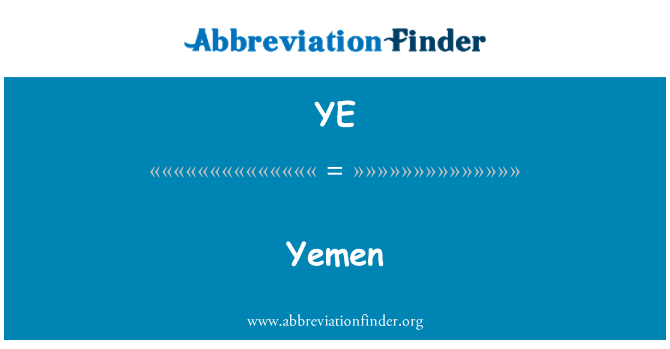 Yemen is about one and a half times the size of Norway, and has varied landscapes. Inland it is mountainous and very dry. The long coast is a desert area. Between the mountains and the coast are fertile high plains. In addition to the mainland, Yemen has 112 islands, and they claim Kuria Muria in the Gulf of Aden. Yemen’s border with Saudi Arabia has not been finalized, while the border with Oman was established in 1995.

The climate is warm and dry, except in the highlands, where it is a little cooler. The country had former forests and rich wildlife, but harvesting has contributed to erosion and desertification, and most animal species have disappeared.

Lack of water is one of the country’s biggest problems. All the rivers in Yemen are dry and filled only when it rains. The situation becomes extra serious because groundwater levels are declining, while population growth is high. The worst is around the capital, Sana’a, where high water consumption makes the danger of acute water shortage enormous. Calculations show that the city can be completely waterless by 2025.

Jemen’s location when entering the Red Sea has always given the country an important strategic position. In ancient times the area was fertile, had a well-developed agriculture and great commercial wealth. Throughout history, the area has been part of many kingdoms and empires. The ancient kingdom of Saba had about the same borders as Yemen. In the 500s, Saba was occupied by the Persians, and when the empire became Muslim in the 600s, religions spread to Yemen.

In 1517, the Yemen area became part of the Ottoman Empire. Eventually, European powers also came to the area. When the Suez Canal opened, the area gained greater strategic importance. The British and Ottomans increasingly went to war over the territories, and in the early 1900s they agreed to divide the area between them. The border divided the area into northern Yemen and southern Yemen. The Ottoman forces withdrew from Yemen after World War I (1918).

Yemen was among the Arab countries that experienced major uprisings in 2011, known as the Arab Spring. This led to a coup d’état and civil war in Yemen in 2014, where a Saudi-led military coalition intervened in the country in 2015.

Yemen’s 1990 constitution is unusually democratic for the region. The country has a multi-party system, with the president and the National Assembly being elected in free elections, where women also have the right to vote.

In practice, the country has been difficult to govern, and the government has had little power. In fact, many areas were ruled by local clans. The people feel the greatest affiliation with their tribe or clan, not the country as a whole. Clans are important in society, and many political parties are actually clans and their supporters.

The Constitution still applies formally, but after President Saleh was overthrown in 2011, Yemen has been marked by political chaos. A new constitutional proposal has been prepared, but it has not been introduced because of the civil war.

Yemen is one of the poorest countries in the Middle East. Oil is the most important source of income, but both the price and the production of oil have fallen. Most of the inhabitants live in the countryside and feed on agriculture. Although only six percent of the land is considered arable, agriculture employs almost half of the working population.

The cultivation of the drug khat is the most profitable production for the villagers. This is a problem in a country with rapidly increasing population and ever-less fresh water. Khat accounts for up to 25 per cent of gross domestic product (GDP), but seizes large areas and significant quantities of water – which could otherwise have been used to grow food.

More than half of the population in Yemen live below the poverty line. Child mortality is high, and half of all children suffer from malnutrition. The weak state has made it difficult to raise taxes, and the black economy is large. The weak state power also makes it difficult to give foreign investors security, so little money has come to the country. The civil war has exacerbated the already difficult economic situation.

In the 2018/2019 school year, the UN Association offers a game where the student is to resolve a conflict in the Security Council. In this role-playing game, Yemen has been invited to the Security Council meeting, and the sections that follow are information related to this game.

The government of President Hadi is still the one who has the formal power in Yemen and represents Yemen at this Security Council meeting. They have a close relationship with Saudi Arabia, which they have asked for help in fighting the Houthi rebels. Many Western countries, including the United States, are also on the side of the Yemeni government in the fight against the Houthis.

Yemen has a bad relationship with Iran, which in turn supports the Houthi rebels.

Neither Yemen, Saudi Arabia nor Iran are members of the Security Council, but they are nevertheless invited to this meeting because they are greatly affected by the conflict.

The most important thing for Yemen is to defeat the Houthis. Only when they are fighting can there be peace.

It is important for Yemen to gain sympathy from the world community. It wants to maintain good ties with Saudi Arabia and the rest of the coalition, and support from, among other things, the United States can be used to persuade more countries to also support their coalition bombing. It may also be wise to make Iran appear to be the major villain of the Yemen conflict by focusing on Iran supporting the Houthis and the fact that the Houthis are responsible for the war in the country.

At a Security Council meeting in Yemen in April 2018, Yemen said they believe the Security Council has done too little to prevent the expansion of the Houdi militia. This is not only a tragedy for Yemen, but also very serious in view of the emergence of other militia groups in the world, believes the Yemen’s UN delegation.

All this means that Yemen wants the Saudi Arab coalition to continue its bombing. They probably won’t mind the coalition invading Houdeida either.

Yemen does not have the right to vote at the meeting, so it becomes increasingly important to be active in diplomatic work. That way, they can try to get other countries to vote as they would themselves.