The most commonly used abbreviations about Zambia are ZM which stands for Zambia and ZMW which means Zambian kwacha (Zambia currency). In the following table, you can see all acronyms related to Zambia, including abbreviations for airport, city, school, port, government, and etc. 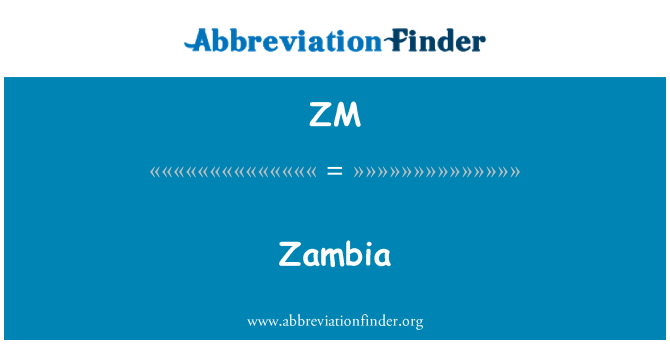 Zambia is a land without coastline on the South African continent, and the country is about as large as Sweden and Norway combined. Most of the landscape consists of savannas and grasslands. Africa’s fourth longest river, Zambezi, with the world-renowned Victoria Falls is the border with neighboring Zimbabwe.

The climate in Zambia is subtropical. The summers are long and warm, while the winters are short and mild. It rarely gets colder than plus 10 degrees centigrade. The rainy season in the country lasts between November and April, and the dry season is from May to October. Most precipitation falls north in Zambia where the rainy season lasts for about 6 months.

Zambia has a rich wildlife, but illegal hunting threatens several of the species. Around the copper mines, a lot of forest is cut, and the logging increases the risk of the soil being washed away during the rainy season.

Bantu Tonga arrived in Zambia about 2000 years ago. The bantu farmed and made tools of iron and copper. Because the country lacks coastline, it took longer for Europeans to become interested in the country. In the 16th century, Arabs and Portuguese immigrated to Zambia. There, for hundreds of years, they traded ivory, slaves and copper, something the local kings did well.

In the 1850s, explorer David Livingstone traveled through Zambia. and his travelogues aroused the British’s interest in inner Africa. In 1890, the United Kingdom allowed a large British company to utilize raw materials and manpower in Zambia, and the United Kingdom gained more and more influence over the country. In 1924, Zambia became a British colony. During the colonial rule, the copper mines were developed, which led to economic growth. Zambia’s population was not allowed to take part in prosperity, and resistance to colonial armies increased. In 1964, Zambia became independent. Kenneth Kaunda, leader of the UNIP independence party, became the country’s first president. A few years later he introduced one-party government.

Protests and coup attempts against Kauda, ​​and the one-party regime resulted in the introduction of a multiparty system in 1990. The same year, the party “The Movement for Multiparty Democracy” (MMD) was formed. Shortly after, MMD won power through the country’s first free elections. MDD was in power for about 20 years. The 2011 election brought with it a historic shift in power when “The Patriotic Front” (PF) won the election. At the 2016 election, PF regained power by a narrow margin. After the election, the opposition directed allegations of electoral fraud against the government and riots broke out among the population.

The President of Zambia is the country’s head of state. The president is elected every five years and the same person can only be elected president twice. The patriotic front won the election with promises of work and better finances to the people. These election promises have not been fulfilled, and the PF is also criticized for persecuting its political opponents and journalists.

West of the country there is a strong independence movement; The Iozi people waging a peaceful struggle for independence for Barotseland.

In Zambia, the majority live in cities. This has led to housing shortages, high unemployment and growing slums in the cities. Faulty agricultural policies and recurrent droughts make food access uncertain, and about half of all children under 5 are chronically malnourished.

The state owns the largest news media in the country, and their coverage is usually in the government’s favor. Facebook has therefore become an important news source with the opportunity to spread varying daily news.

Zambia is one of the world’s largest copper producers. Mining, agriculture, power generation and tourism are also important sources of income for the country. Zambia’s economy is largely based on the copper industry and is therefore vulnerable to fluctuations in copper prices in the world market. There are large areas of uncultivated land in the country, which lays a good foundation for the agricultural industry. Several Zambians living outside the cities live on self-storage farms, but high risk of drought makes this a difficult industry.

The country’s economy has improved since the start of the 2000s, but has not contributed significantly to poverty reduction, as around 60% of the population still lives below the poverty line. Zambia receives funding from several countries, including China being a major investor in the country. Support for the development of governance and education is important.

Corruption has been a widespread problem in the country. In 2009, the country’s former president Chiluba was accused of scamming state money. Both Banda and Sata have carried out large anti-corruption campaigns in the country, with no good results.