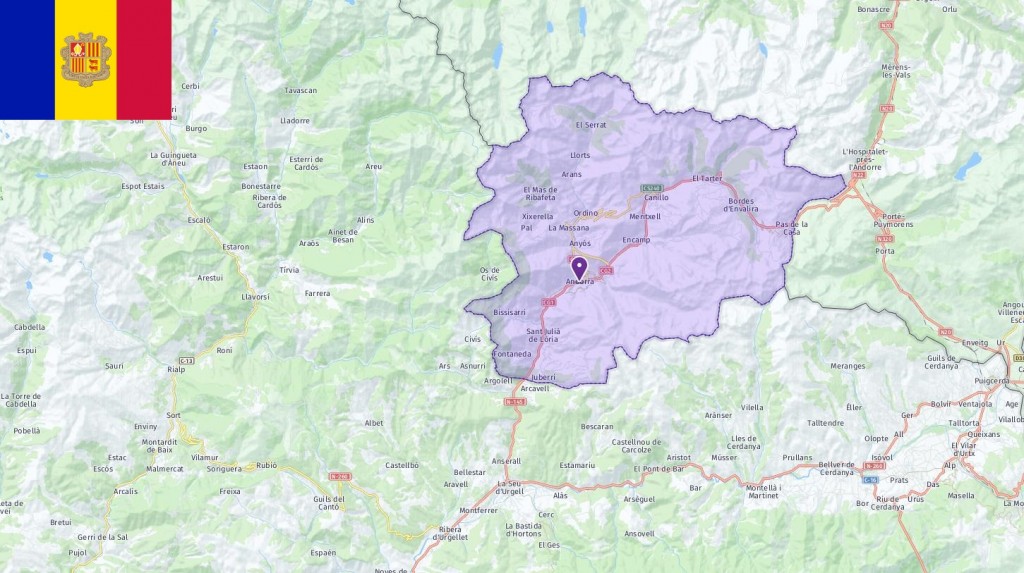 The most commonly used abbreviations about Andorra are AD which stands for Andorra and EUR which means Euro (Andorra currency). In the following table, you can see all acronyms related to Andorra, including abbreviations for airport, city, school, port, government, and etc. 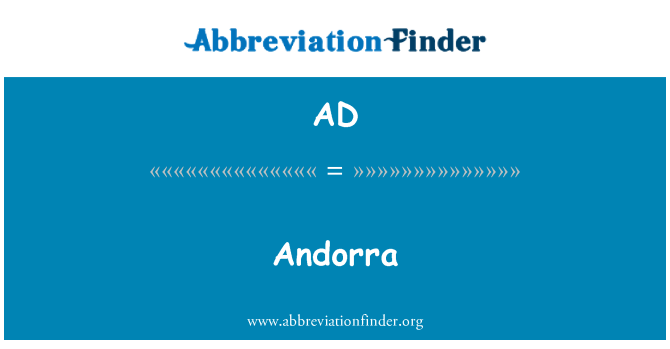 Andorra is an inland state in the Pyrenees mountain range. The landscape is characterized by steep mountain terrain, with many peaks exceeding 2,000 meters above sea level. The highest peak is the pic de la Pedrosa at 2946 meters above the river Valira with tributaries, flows throughout the country and flows into the Ebro river in Spain. The country’s lowest point is 840 meters above sea level and lies to the south towards the border with Spain. The climate is alpine Mediterranean climate with cold snowy winters and hot dry summers.

The biggest environmental challenges in Andorra are related to deforestation and overgrazing of the mountain sides. Overgrazing has led to increased soil erosion, which helps wind, rain, floods and snow wash away the cultivable soil. The built mountain valleys also struggle with high air pollution from traffic.

In the 1930s, discontent in Andorra increased over the political and economic control of the country. The discontent led to universal suffrage for the population, and in 1933 elections were held for the first time in the country. Only men over 25 with a family who had lived in the country for at least three generations were allowed to vote. Women first got voting rights in 1970.

In 1981, for the first time, a separate government was established in the country. The government started work on a separate constitution. In 1993, a large majority of the population supported the new constitution, and Andorra became an independent state. However, the country retained the Spanish bishop of Urgel and the French president as official heads of state.

Formally, Andorra is a constitutional joint principality where the Spanish bishop of Urgel and the French president are the country’s heads of state. In reality Andorra is a parliamentary democracy. The executive power lies with a government headed by a government president. The legislative power lies with a general council that is elected every four years. Half of the representatives are elected by the country’s seven parishes, while the rest are elected directly by the entire country. The General Council elects the President, who alone elects the Government. France and Spain share the military responsibility for Andorra. The country is not a member of the EU, but has maintained close relations with both France and Spain, and has several cooperation agreements with the EU.

Andorra has a high standard of living, with free health care and good health insurance for the sick and unemployed. The average life expectancy is among the highest in the world. Women and men are equal in the laws of the country, but women earn on average less than men. The country also has several game traditions and norms that make society divided by gender. The country is widely criticized for its strict immigration rules which make it very difficult to obtain citizenship in the country.

Andorra’s economy was based on agriculture until the 20th century. Towards the end of the 20th century trade and tourism emerged as the most important industries. Andorra has no tax on the sale of goods, which has helped to attract tourists to the country. Most tourists come in winter to take advantage of the country’s good winter sports facilities. Every year, over 10 million tourists visit the small country.

Andorra has long been known as a banking and financial center. Favorable tax regimes led many international companies and wealthy individuals to move their business to Andorra. This gave the country a reputation for being a tax haven. In recent years, new taxes have been introduced and the economy has become more open to fighting the rumor. Although the country is not a member of the EU, Euro has been used as currency since 2002.