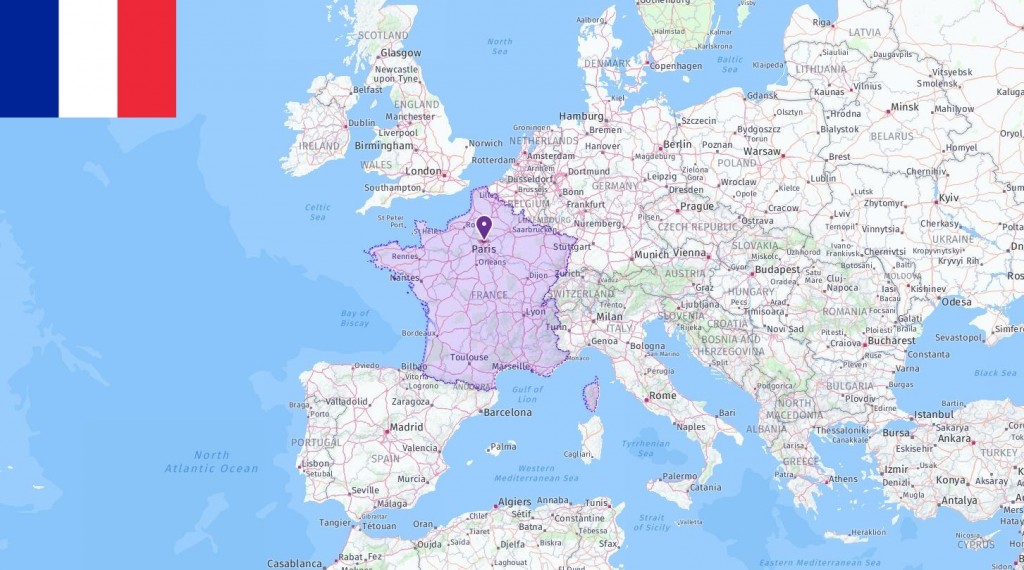 The most commonly used abbreviations about France are FR which stands for France and XPF which means CFP franc (France currency). In the following table, you can see all acronyms related to France, including abbreviations for airport, city, school, port, government, and etc. 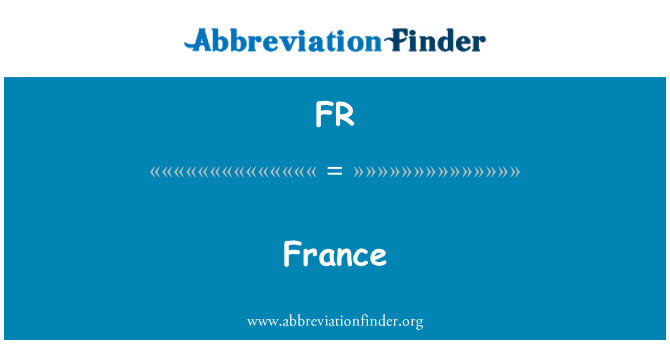 France consists of three geographical regions: the lowland areas in the northwest, the highland area Massif Central in the south, and the Pyrenees and Alps mountains in the southwest and southeast. The landscape is intersected by the great rivers Rhône, Loire and the Seine. These have been important transport routes for many centuries. The Atlantic and Mediterranean coasts consist of cliffs and elongated sandy beaches and have many ports where large commercial cities have emerged.

In the north of the country, the climate is typically North Atlantic, with much rainfall throughout the year and little differences between seasons. Further south is the typical Mediterranean climate, with less rainfall and warmer summers. After many years of unregulated emissions from the industry, large parts of the drinking water sources in the country are heavily polluted. The emissions have also led to acid rainfall and reduced air quality in the larger cities. France is among the countries in the world that emit the most CO2.

The area that is now France was incorporated into the Roman Empire 50 years BC, after fierce battles between Romans, Celts and Gauls. After the fall of the Roman Empire in the 400s, the Franks took over power in the area. This led to the Frankish empire under Charles the Great in the 8th century. The empire was divided by the end of the 900s, and France was divided into several smaller kingdoms that were in constant conflict with each other. For several hundred years there was a clear distinction between the southern and northern areas. Only after the Hundred Years War against England (1337-1453) was France united as a more or less unified country.

After the Reformation in the 16th century, the country was thrown into many religious wars, which were replaced by the French Revolution of 1789 in which tens of thousands of people were killed. Revolutionary ideas of freedom, equality and brotherhood to influence politics throughout the world. A few years later, Napoleon appointed himself Emperor of France. Napoleon waged a number of wars against other European powers, until he was himself defeated at the Battle of Waterloo in 1815.

During a new revolution in 1870, the monarchy was abolished. At the same time major social reforms were introduced, France became a leading industrial power and gained several colonies in Africa. The country participated on the victorious side in both world wars, and in the post-war period emerged as a key player in both European and international politics.

French politics has long been characterized by moderate right-wing and left-wing alliances, switching to having presidential and government powers. In recent years this has changed. The two main opponents of the previous election were not the traditional parties, but the outer-right party National Collection and a new center party, En Marche, with Emmanuel Macron in the lead. Macron won the 2017 presidential election and won a majority in parliament.

The government apparatus has traditionally played a strong role, and the public sector is very large. This is expensive for the state, but also leads to France having one of the world’s best health care systems. The country has one of Europe’s largest immigrant populations, and in several of the larger cities, the authorities are struggling with integration. Internationally, France has been one of the most important countries in the development of the EU, and France has a lot of power through its permanent seat on the UN Security Council. France is also a member of the NATO Defense Alliance.

Nevertheless, France has struggled financially since the beginning of the 2010s. After the financial and euro crisis, economic growth has stagnated, while unemployment has increased. A highly regulated labor market is considered by some as a cause. In recent years, therefore, the government has focused on deregulating the labor market, especially under Macron.

France has had huge budget deficits, much due to an expensive and heavy-handed welfare system. The state has traditionally had a large stake in the most important industries. To cover the deficits, more and more sectors have been privatized. Both labor market liberalization and privatization face strong protests from the powerful unions.

France has also been forced to raise large loans to cover its budget deficits, and foreign debt has at times been 96-97 per cent of the country’s gross domestic product (GDP).

The UN Association is offering a role-playing game for the 2019-20 school year in which students will try to resolve a conflict in the Security Council (Iran and the nuclear issue). France is a permanent member of the Security Council, and the sections that follow are information related to this game.

France is an important member of both NATO and the EU, and supports these institutions’ common policies in many areas. At the same time, the country gives priority to the UN and its efforts to achieve international cooperation based on international law. Despite this, France is not afraid to go its own way if the country feels the need.

France has a close dialogue with the other veto powers, and also has a close relationship with the EU member Germany, who is currently also a member of the Security Council. Russia and France are often opponents of the Security Council, and are basically far from each other when it comes to the view of human rights and how active the UN should be. At the same time, France sells some advanced military equipment to Russia, something the US and other Western countries are not very excited about. Relations with Russia have worsened after the Ukraine conflict, and France stands with the rest of the EU in terms of financial sanctions against Russia as a result.

China and France, too, are far apart in the view of the UN and its relation to human rights. Nevertheless, there is a great degree of mutual respect and dependence between the two countries. In Africa, France has a particularly close relationship with countries that were previously French colonies.

Compared to Iran, France was one of the countries involved in the construction of the first civilian nuclear plant in the country (Bushehr) before the Islamic Revolution in 1979. Although this work was interrupted, with significant financial losses for Iran, the two countries retained the contact and a certain technological nuclear cooperation also in the time afterwards.

France is one of the three major EU countries that negotiated the nuclear deal with Iran in 2015. The country still supports the agreement, but has been somewhat more critical than the other EU countries in terms of the fate of the agreement in the long term. When Israel announced in April 2018 that they had stolen thousands of documents and data files from a warehouse in Tehran proving that Iran continued to have a secret nuclear weapons program even after 2010 (the so-called Amad Archive), the French president went out and said that the US and the EU together should negotiate a much stricter nuclear deal with Iran from 2025. The French president also felt that Europe had to support America’s demands to Iran more strongly on withdrawal from regional conflicts in the Middle East. Furthermore, France also believed that Iran had to quickly accept reductions in its missile and missile program.

While the French president made his comments on the Amad revelations, other European leaders believed that the documents in the archive – provided they were genuine – did not prove that Iran had continued its military weapons program after the nuclear agreement was signed in 2015. The archive was therefore indirect evidence that Iran now complied with the agreement.

France is working with the United Kingdom and Germany to stack on its feet the alternative trade mechanism INSTEX, which will protect trade with Iran against US penalties. INSTEX will have its headquarters in Paris, and currently contains mechanisms for dealing with food and medicines. Iran’s message to the EU and France is that INSTEX is completely insufficient as long as no trade in Iranian oil is included. If oil is included in INSTEX, Europe will face even stronger opposition to the United States, as oil sanctions are one of America’s most important means of pressure against Iran in the ongoing conflict. Should oil trade not be included in INSTEX, Iran threatens to further increase the enrichment of uranium, thus breaking one of its most central obligations in the nuclear agreement. France, together with the other EU countries, must consider whether INSTEX should include oil trade. The EU has allowed countries outside Europe to participate in INSTEX – Russia and China included.

Like the other EU countries, France is also critical of what they perceive as Iranian actions against dissidents living in exile in Europe, and the country supports EU sanctions against Iran as a result.

France, along with several other EU countries, join the Combined Maritime Forces naval force, which is based in Bahrain to patrol parts of the Persian Gulf to prevent various types of crime at sea (drug trafficking, piracy, terrorism). The US has suggested that the force could act as an escort for merchant ships sailing through the Strait of Hormuz, which France fears could further provoke Iran and further help European countries also be drawn into the fierce confrontation with the country the US wants. France is currently negative to join the US-led force.

France is positive about the proposal to create a nuclear-free zone in the Middle East. However, the country is not pushing for the zone to be created until there is greater agreement among the countries in the region about the right time.

There is little discussion in France about the role of nuclear weapons in its defense.