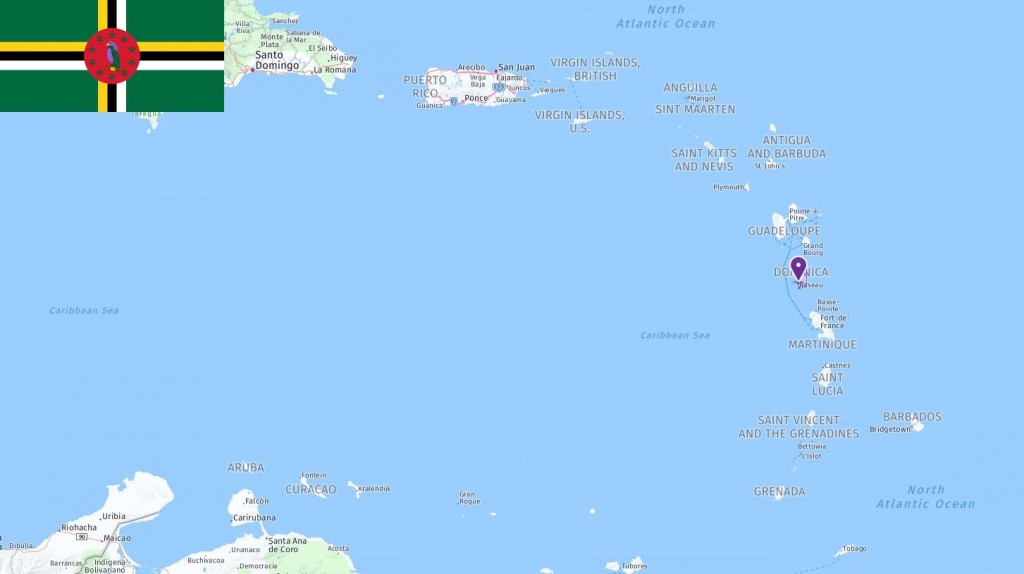 The most commonly used abbreviations about Dominica are DM which stands for Dominica and XCD which means East Caribbean dollar (Dominica currency). In the following table, you can see all acronyms related to Dominica, including abbreviations for airport, city, school, port, government, and etc.

Dominica is a small island state in the Caribbean. The island is known for its rich nature with rainforest, waterfalls, rivers, lakes and bird sanctuaries. The rainforest, which covers most of the island, is on UNESCO’s World Heritage List. The world’s second largest hot spring is also on the island. The island has eight volcanoes, but unlike its neighboring islands, Dominica has almost no sandy beaches. Despite the island’s dramatic nature, 34 per cent consists of arable land, of which the majority constitute banana plantations. Dominica also has the world’s largest parrot species, which is depicted in the country’s flags.

The island is located in an area that is very prone to hurricanes and has a warm and tropical climate. There are plans to build a large airport in Dominica, but one is afraid it will threaten the country’s diverse nature.

Dominica has been inhabited by indigenous peoples for around 2-3000 years, including the peoples of Carawake and Kalinago. As Kristoffer Columbus became the first European to see the island, on Sunday, November 3, 1493, he named the island “Dominica” after the Spanish word for Sunday. The steep and unwelcome nature of the island enabled locals to stand up to the European colonial powers for nearly 200 years. When France finally established a colony in Dominica in the 18th century, it was the last of the Caribbean islands to be colonized.

Until 1976, when Dominica became an independent state, both France and the United Kingdom ruled the island. In the 1980 election, the Dominica Freedom Party won, and Mary Charles became the Caribbean’s first female head of state. She sat as prime minister for 15 years.

Throughout history, Dominica has repeatedly been hit hard by hurricanes. The most powerful hurricane “San Felipe Segundo” killed more than 300 inhabitants. The last major hurricane was in 2017. It brought enormous devastation and is a reminder of how vulnerable the country is to natural disasters.

Dominica is a republic where the president is elected for a five-year term in free elections. The executive has the prime minister who heads the government. Politics in Dominica has been dominated by a right-wing Freedom Party and two Labor parties. The economic differences between poor and rich are relatively small. Nevertheless, only those in permanent employment can enjoy welfare benefits such as pensions and sickness benefits. This poses challenges in that as many as 23 per cent of the population are unemployed.

Compared to its Caribbean neighbors, crime in Dominica is overall relatively low. Recent trends, however, show that crime is on the rise, especially related to drug trafficking. Dominica also has very strict laws related to LHBTI, including homosexuality can be punished with up to 10 years in prison.

Dominica’s economy has largely been based on banana exports. However, the vulnerability of being dependent on only one industry has led to the country actively trying to develop other industries. Exports of soap, citrus fruits and vegetables are other industries in Dominica.

The beautiful scenery and tropical location make Dominica attractive for tourism. This industry is an important part of the island’s future plans, but is currently relatively underdeveloped, and is suffering from the island’s lack of a major international airport. Since 1998, the country has also tried to draw foreign capital to the island, by positioning itself as a tax haven.