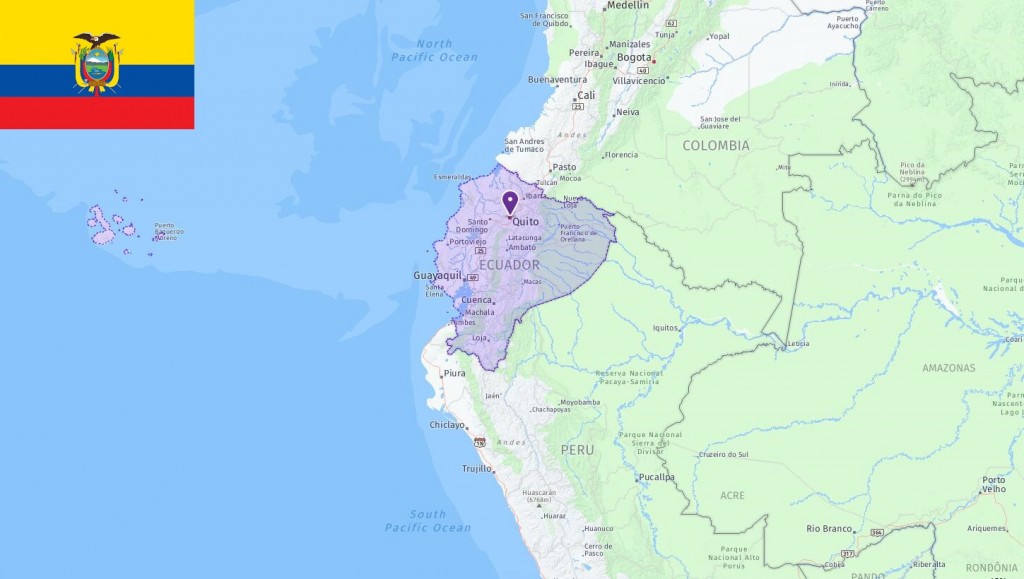 The most commonly used abbreviations about Ecuador are EC which stands for Ecuador and USD which means United States dollar (Ecuador currency). In the following table, you can see all acronyms related to Ecuador, including abbreviations for airport, city, school, port, government, and etc. 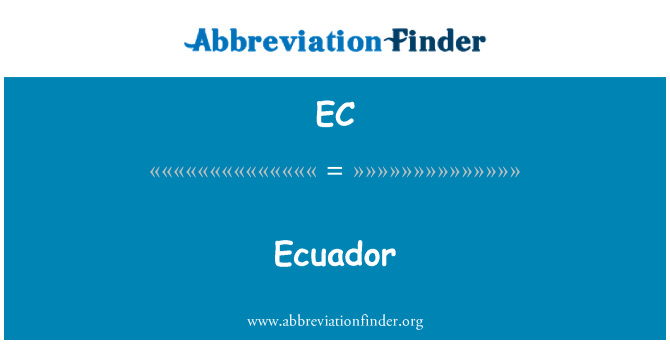 Ecuador extends from the Amazon in the east, over the Andes, and down to the Pacific coast. The mainland is divided into three parts: the coast and lowlands in the west, covered by tropical forest and desert, the highlands of the Andes, and the lowlands in the east where the Amazon rainforest is. A hundred miles off the mainland is the Galápagos Islands, which is on the UNESCO World Heritage List. Both on the islands and in the Andes there are several active volcanoes – the world’s highest active volcano is Cotopaxi (5897 m asl), located in the highlands.

The climate varies with the height above the sea. In the east, the climate is tropical with high temperature and heavy rain. In the southwest there is desert, while in the highlands it is more common with rain in the autumn and spring. Every few years, the country is hit by El Niño, a special weather phenomenon that brings with it typhoons and heavy thunderstorms.

Destruction of the forests is a serious problem. Deforestation is caused by agriculture: especially cattle farming and plantations with banana, cocoa and palm oil. If you continue to cut down forests at today’s pace, you assume that forests in the Amazon area will be completely gone by 2035.

Ecuador has been populated for thousands of years. In the late 1400s, the area became part of the ancient Incaric, before the Spaniards colonized it in 1534. Over the next hundred years, half of the Inca Indians died due to illness and forced labor during the colonial period. Around 1820 a war of independence started against the Spanish colonial power, and in 1822 Ecuador became independent as part of Greater Colombia. In 1830 Ecuador became completely independent.

Since independence, a territorial conflict between Ecuador and Peru has become the longest in the Western Hemisphere, with several armed clashes over almost 200 years. After a war in 1941-42, Ecuador had to abandon oil-rich areas of the Amazon. A final peace agreement ended the conflict in 1998.

The 20th century was politically unstable, with several military coups and economic crises. Ecuador has depended on one export product at a time: cocoa in the 1920s, coffee in the 1930s, bananas in the 1940s, and since the 1970s, oil has become the main source of income.

Since 1979, the country has had civilian rule. The relationship with the indigenous population gradually improved throughout the 20th century, and only in 1978 were illiterates given the right to vote. Various land reforms and democratization processes have been tried.

The beginning of the 2000s was again politically unrest after the 2000 coup and economic crisis. Several presidents were deposed during their reigns. Socialist Rafael Correa came to power in 2007, with promises of a new constitution and a more equitable distribution of the country’s wealth. Correa has contributed to political stability, nationalized oil resources, and his “citizen revolution” has provided poorer living conditions. Unemployment has decreased, more people are learning to read and health care is better.

Ecuador is a democratic unity republic, and the president is head of state and government, with much power. Following the new Constitution of 2008, the President, Vice President and National Assembly are elected for four years at a time. Since 2017, Correa’s successor and ally Lenín Moreno Garcés has been president.

With the new constitution, Ecuador became the first country in the world to give nature rights.

There are major economic inequalities in Ecuador, and the differences between rich and poor are enormous. With the United Nations definition of poverty, over half of Ecuador’s population lives in poverty. Governments try to balance the economic differences in the country with social schemes. The country’s health sector is also divided: Those who have money make use of private health services, everyone else uses the public health service, which in particular in the village is poorly developed.

In Ecuador, human trafficking is a major problem, and crime in the country is high. One in five children suffers from malnutrition, and access to clean water is a problem. In recent years, many have also been affected by Western lifestyle diseases such as obesity, diabetes and high blood pressure.

Ecuador is one of South America’s poorest countries. Economic developments have long been hampered by high unemployment, high inflation and a weak modern sector. After Rafael Correa became president in 2007, the country experienced high economic growth.

Cocoa was Ecuador’s most important export product for a long time, and the vulnerability of being dependent on one commodity became evident when disease hit the crops in the 1920s. Today, flower exports are greater than coffee and cocoa exports combined.

Ecuador’s main export items are oil, bananas, shrimp and other agricultural products. The country is the world’s largest banana exporter, but oil recovery has been Ecuador’s economic backbone for many decades. The country is completely oil dependent and has increased its export capacity thanks to a new oil pipeline that was completed in 2003.

Ecuadorian nationals living abroad send home so much money that it represents a small but important part of the economy. Tourism has also become an important sector. Ecuador’s main trading partner is the United States, and Ecuador’s currency has been the US dollar since 2000, because the local currency sucre lost its value during high inflation.