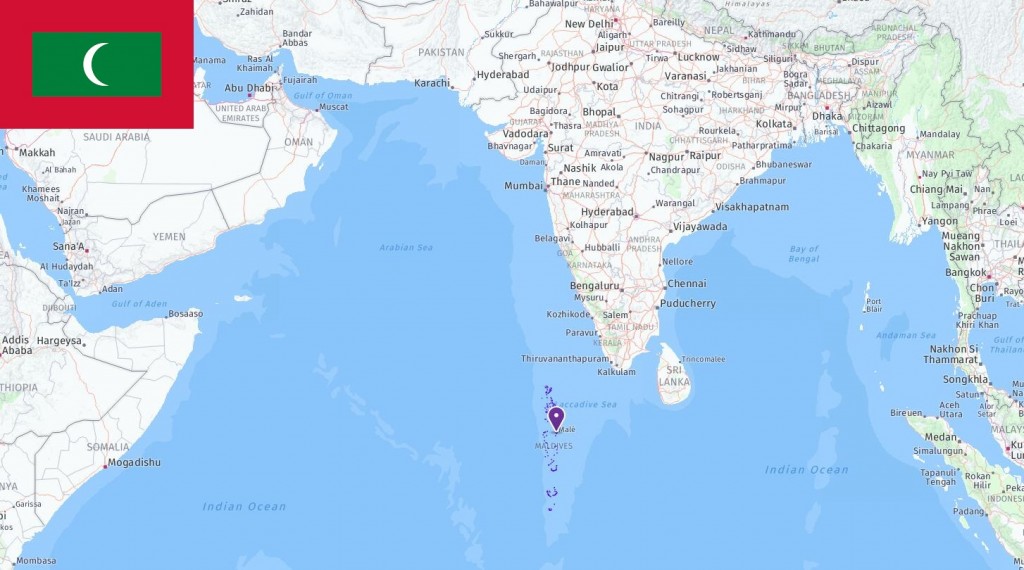 The most commonly used abbreviations about Maldives are MV which stands for Maldives and MVR which means Maldivian rufiyaa (Maldives currency). In the following table, you can see all acronyms related to Maldives, including abbreviations for airport, city, school, port, government, and etc. 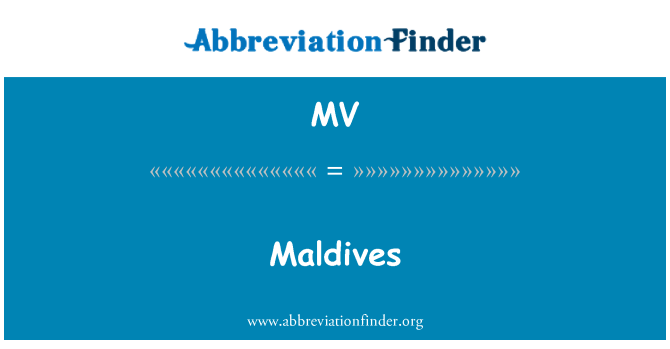 The Maldives is an archipelago of the Indian Ocean. The country’s highest point is only 2.4 meters above sea level. the lowest among all the countries of the world. The archipelago consists of 26 atolls, and comprises around 1190 small islands. Nature is characterized by white sandy beaches and tropical palm forests. On some of the larger islands there are small areas of rainforest. The climate is tropical hot and humid. From May to August, a southwest monsoon brings with it a rainy season. From December to March, a northeast monsoon carries warm and dry air over the islands.

The biggest environmental challenge for the Maldives is sea level rise. With an average height of only 1.5 m. the entire country will disappear if sea level rise continues. Tropical storms, which regularly occur in the region, can also have disastrous consequences for the country. Sea life around the islands is severely threatened by human activity, which also directly threatens life on land. In particular, the coral reefs around the islands are threatened by coral mines established by the jewelery industry, sand dredging and pollution. The underwater reefs act as natural barriers to waves and underwater currents. If the reefs disappear, the islands will erode faster and risk being washed out into the sea.

The first inhabitants of the Maldives probably came from southern India and Sri Lanka around 1000 BCE. The present inhabitants are mainly descendants of East African and Arab seafarers who settled on the islands around the 12th century. Over the centuries, the islands have been visited and influenced by seafarers from Arabia and the Indian Ocean. The original Buddhist population was converted to Islam in the 12th century, and the islands became a Muslim sultanate. Portuguese controlled the islands between 1558 and 1573, before the European colonists were defeated by the warlord Muhammad Thakurufar Al-Azam. Although the islands were ruled as an Islamic sultanate for most of the period from 1153 to 1968, the Maldives was a British protectorate from 1887 to 1965.

The Maldives gained independence from the United Kingdom in 1965. Three years later, the regime was changed to a republic and the country was given its current name. Since independence, the Maldives has been characterized by repressive dictatorship regimes. In 2004, the then president initiated several political reforms, after stopping several coup attempts and rebellions. Political parties were banned in the Maldives until 2005. As a result of long discussions in parliament, the first free democratic multi-party elections were held in 2008.

The president, who is the head of state, is approved in general elections after being nominated by parliament. Parliament is elected directly by the people for five years at a time. Since 2008, politics has been characterized by democratic reforms and questions about the impact of climate change on the archipelago.

Since the 1970s, living standards in the Maldives have increased significantly. Health care has been greatly improved, and large investments have contributed to most people having access to clean fresh water. Maldivian society is strongly influenced by the state religion Islam. Women’s position in society is weak because of repressive religious laws. Despite this, women have traditionally not had to wear face-covering garments. Almost all women have also received education and are allowed to participate in working life.

Maldives has seen strong economic growth since the 1970s. This is despite the fact that the population is small and the distance between the islands is large. The economy is based on tourism and fishing. Fishing is more widespread than agriculture because the soil is not suitable for food production. The most important export product is tuna. The Maldives largely depend on food imports, as the land has little cultivable land. In addition, the island kingdom imports all fuel and oil. This contributes to a trade deficit (they import more than they export). To become less dependent on oil and diesel imports from abroad, the Maldives hopes to become the world’s first CO2-neutral country. For this reason, they are investing heavily in developing solar, wave, and wind power.

Tourism is the Maldives’ most important industry. It is also expected that this industry will grow a lot in the years to come. The country is vulnerable to fluctuations in the world economy, as the tourism industry is influenced by the economy of the coming tourists. This became evident after the international financial crisis in 2007, when there was a sharp decline in the number of tourists visiting.