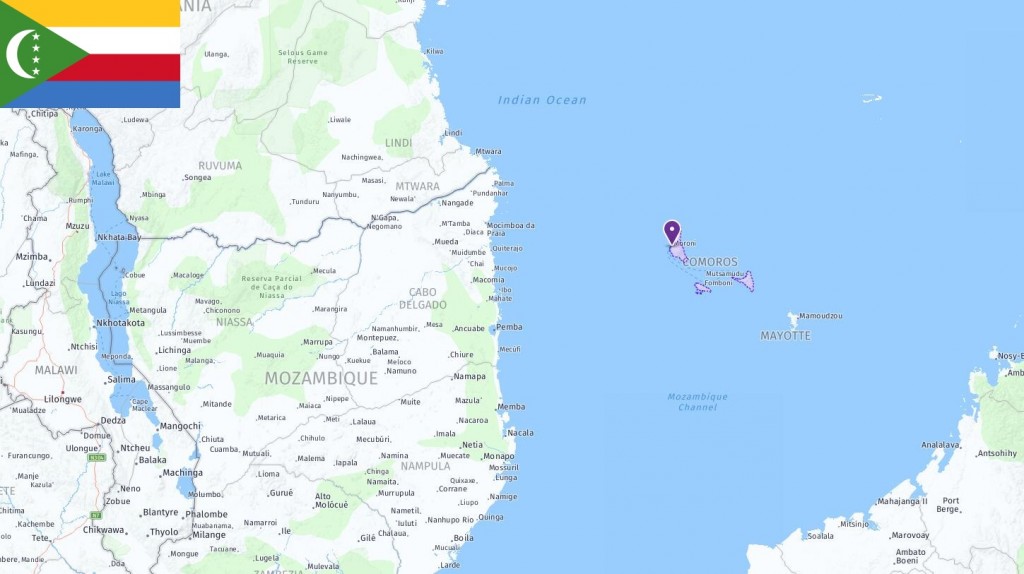 The most commonly used abbreviations about Comoros are KM which stands for Comoros and KMF which means Comorian franc (Comoros currency). In the following table, you can see all acronyms related to Comoros, including abbreviations for airport, city, school, port, government, and etc. 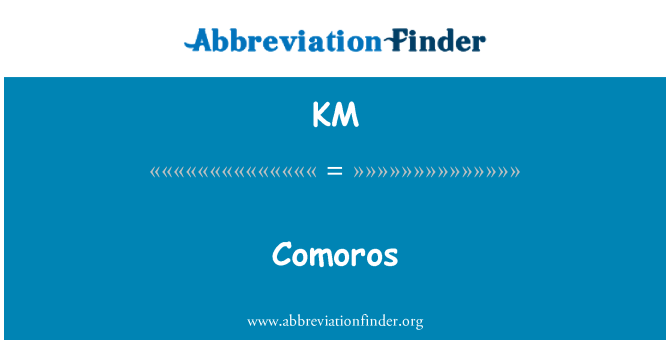 The Comoros are located in the Mozambique Channel, between Madagascar and the African East Coast. The country consists of four major volcanic islands, and many small islands. They are mainly made up of black basalt layers with coral reefs all around. The active volcano Kartala is the highest mountain, 2361 meters above sea level. Around the volcano grows ylang-ylang, used in perfume and of which the Comoros is the world’s largest exporter. Savannah and plantations dominate the landscape on the central parts of the islands, while the coast has wetland areas. The forests that previously covered the islands are gone, and soil destruction is a major problem.

The islands have a tropical coastal climate, with small annual temperature variations (23-28 degrees) and much rainfall. Of land mammals, there are six bat species and two half-monkeys. 150 species of birds are registered, almost half of the 43 species that are native (endemic) and many are endangered.

The Comoros were first populated in the 400s by Melanesian-Polynesian people. Later, people came from the east coast of Africa, Indonesia, Madagascar, Persia and Arab territories. The islands were subject to many sultans, and early in the 16th century the Comoros were discovered by European seafarers. The next few years, Portuguese, Dutch and French settled there. France succumbed to the island of Mayotte in 1843, and the other three islands came under French protection in 1886. The islands gained the status of overseas French territory in 1947, with its own representation in the French National Assembly.

The Comoros became independent in 1975, but the island of Mayotte chose to remain French in a referendum. Deep division has characterized Comoros ever since. The country has previously experienced prolonged political turmoil, with 21 coups and coup attempts since the country became independent. The weak political leadership has enabled foreign mercenaries to influence the islands through participation in the military coups.

In 2006, the country experienced its first peaceful change of power since 1975. A local uprising on the island of Anjouan in 2007-2008 was beaten by an invasion troop with support from soldiers of the African Union (AU).

Comoros is a federal republic where the president is head of state and government. In 2001, the country was given a new constitution which states that the presidential post should rotate between the three main islands. This gave the country more stability and peaceful choices, but has also been very expensive to operate. The system was abolished with a new constitution in 2018, which was passed after a referendum that received a lot of criticism for being threatened and cheated. The new constitution also declares Islam as state religion.

Comoros is one of Africa’s most densely populated countries. The population with an Arab background is growing in the cities, while the rural population often has an African background. Nearly half the population lives on the island of Grande Comore, but the problems of overcrowding are greatest on the smaller island of Anjouan. Many live on self-sufficiency agriculture, which is why the level of conflict increases when the land does not stretch. In general, there are quite a few Comoros who are formally employed in a job.

Many therefore go on safe boats across the sea to Mayotte to seek asylum. According to French authorities, as many as 10,000 may have drowned on their way across the sea from 1995-2012. The Comoros have largely maintained close ties with the former colonial power of France, although the relationship has been tense for periods due to Mayotte. France has a military base in Mayotte, and therefore considers the island as strategically important.

The Comoros are one of Africa’s most densely populated countries, and together with few natural resources and political mismanagement, this has made the country one of the world’s poorest. The country is completely dependent on international aid and money transfers from nationals working abroad. Overpopulation, few natural resources and little agricultural land have meant that around a third of the country’s population lives abroad, most of them in France. France is the country’s most important trading partner and provides financial assistance to the Comoros.

Business is poorly developed and most of them live on agriculture, including fishing and forestry. It mainly operates self-sufficiency agriculture, but the country exports some agricultural products such as vanilla and perfume growth – and cloves account for more than half of its export revenue. Major political unrest over many years has contributed to weakening the development of the Comoros. Lack of stability has made it difficult to attract foreign investment, tourism and development assistance to the country.