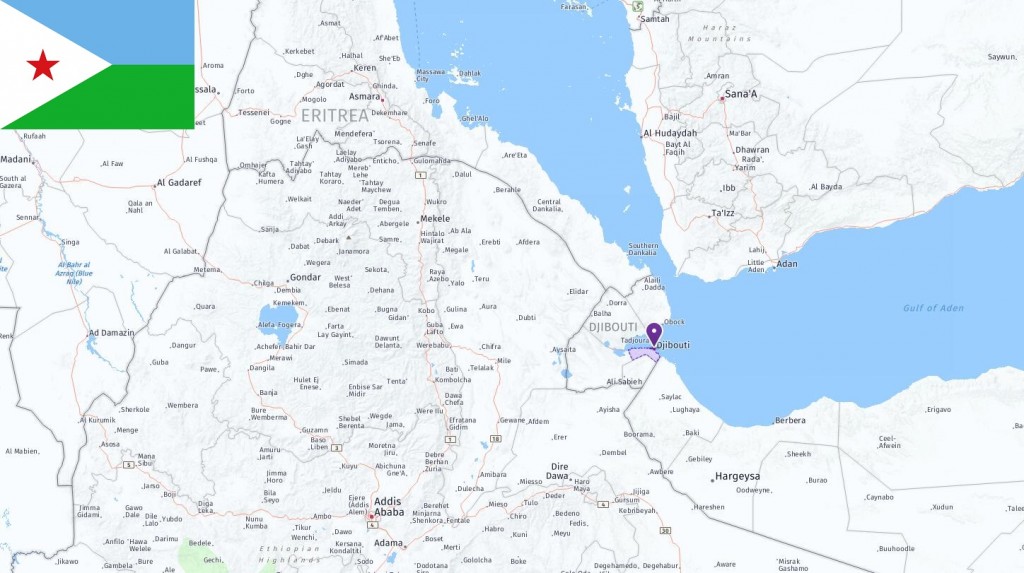 The most commonly used abbreviations about Djibouti are DJ which stands for Djibouti and DJF which means Djiboutian franc (Djibouti currency). In the following table, you can see all acronyms related to Djibouti, including abbreviations for airport, city, school, port, government, and etc.

Djibouti is one of Africa’s smallest countries. Nearly 90 percent of the country is desert, with volcanoes and salt lakes. Here live nomadic herders. The salty Lake of Assal, which is 150 meters below sea level, is the lowest point on the African continent and the second lowest in the world.

The climate is dry. The area around the sea is among the hottest places on earth, with temperatures above 50 ° C. Only the mountains in the north have some significant vegetation. Two thirds of the population live in the capital, the rest live on the relatively fertile coastal strip along the Gulf of Tadjoura.

Djibouti struggles with drought and is not fertile. If it rains, it happens in November and usually lasts no more than 20 days. The salt content of the water is increasing, and the Djibouti suffer from water shortages. In addition, pollution of water sources is a major problem. The forests are threatened by the expansion of agricultural areas. This eradicates several animal species. Authorities have introduced a ban on hunting, but the ban is not being complied with.

In ancient times, the area that is today Djibouti was hardly populated because there are so few fertile areas. The people groups that dominate the country today, the Afaras from the Arabian Peninsula, and the Issa from Somalia, immigrated from the 20th century BC onwards. Both groups were nomads. In the 8th century, Muslim missionaries brought Islam to the area, and for 700 years Arabs controlled trade in the region. In the latter half of the 19th century, France gained ever greater control over today’s Djibouti, and in 1897 the area became French colony.

After World War II, Djibouti changed its status from colony to French overseas territory, and they gained ever greater autonomy. At the same time, the contradictions between the peoples’ groups became increasingly clear, as the Issa in particular wished to disband completely. In 1977, Djibouti gained independence following a referendum. The Issa-dominated party, RPP, won the country’s first election and Hassan Gouled Aptidon became president. In 1981, all parties other than the RPP were banned, and tensions between the people groups increased. In 1991, FRUD, an opposition Afar group, started a revolt that developed into civil war. Through several peace agreements, and under pressure from the Civil War and France, Aptidon started a democratization process. Only in 2001 did all insurgent groups drop their weapons.

Djibouti is a republic by French model. The President is elected directly for periods of five years. He/she has the executive power and appoints a prime minister to lead the government’s work. The President and the Prime Minister together appoint the rest of the government, which is accountable to the President. The National Assembly has the legislative power.

During and after the Civil War, several democratic reforms were implemented. A multi-party system was introduced in 1992, in 1997 Frud entered the National Assembly and got a seat in the government. In 2003, all parties wishing to stand were elected, and in 2013 the electoral system was changed to make it easier for smaller parties to enter the national assembly.

Today, Djibouti formally has a multi-party system, but the policy is completely dominated by the ruling party RPP. The opposition has always had difficulty gaining influence. This is partly due to the electoral system of majority voting in one-man circles, which gives an advantage to the largest party. This is partly because the state is pursuing the opposition and the government controls the state-owned media. The government is constantly being accused of human rights violations and of electoral fraud.

The port of the capital is very important for freight transport to and from the Red Sea. From 1981 it has been a free port, which means that the area is outside the country’s customs border. For Ethiopia, this is the most important port of foreign trade. Similarly, Djibouti is completely dependent on Ethiopia using the port – over 90 percent of goods passing through the port are on their way to or from Ethiopia. Other African countries also use the port as an intermediate station for foreign trade.

Although Djibouti’s economy has grown, the country is poor and dependent on aid. France is the largest donor, but the United States is giving more and more. Much of the country’s income comes from countries that pay to have military bases in the country. As of 2017, this includes France, the United States and China.

Because Djibouti is largely desert, agricultural opportunities are limited. The country therefore imports 80 percent of all food, mostly from Ethiopia. Because the area is volcanic, it attempts to extract geothermal heat. There is hope that the country will become self-sufficient in energy and export further, but work will be slow. Today, Djibouti exports livestock and skins.