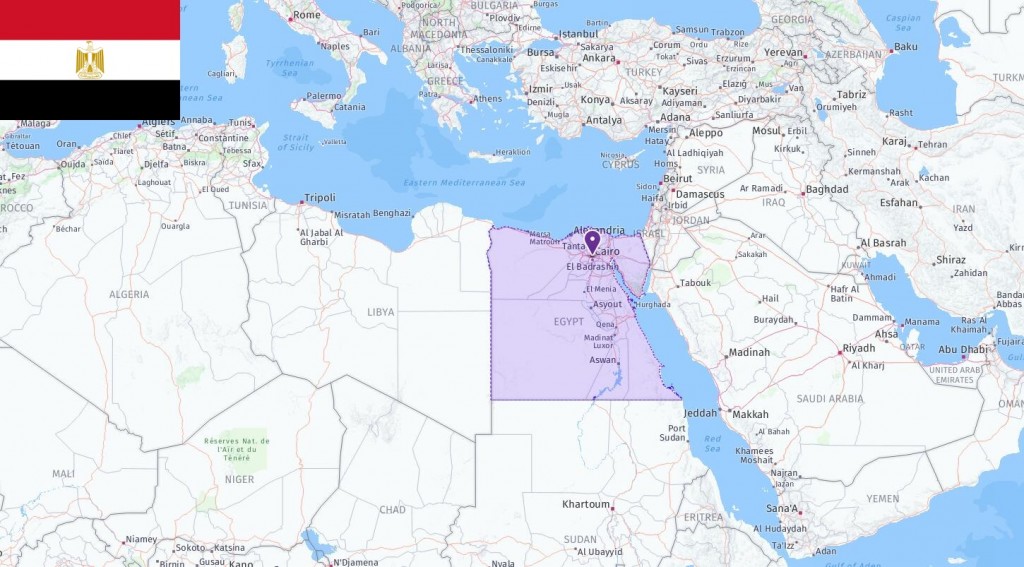 The most commonly used abbreviations about Egypt are EG which stands for Egypt and EGP which means Egyptian pound (Egypt currency). In the following table, you can see all acronyms related to Egypt, including abbreviations for airport, city, school, port, government, and etc. 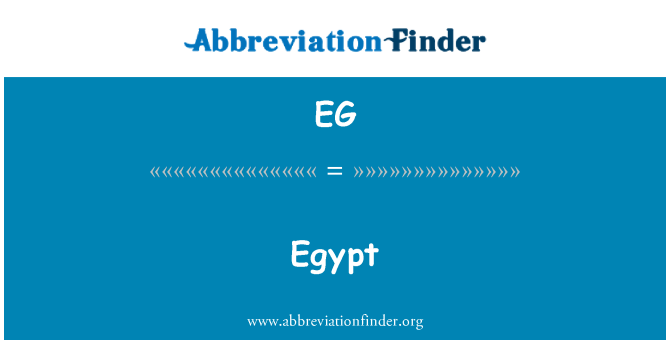 The nature of Egypt is characterized by desert. The Nile River flows throughout the country from south to north. The banks of the river are fertile oases in the otherwise arid desert landscape. In the far east is the mountainous Sinai Peninsula. The peninsula is separated from the rest of the country by the Suez Canal, which links the Mediterranean and the Red Sea. Almost the entire population lives along the Nile, by the Suez Canal, or in the large river delta where the Nile flows into the Mediterranean. The climate is warm and dry throughout the country, with the exception of the humid delta area in the north. Some rainfall may occur along the coasts, while inland rainfall is very rare.

The Nile is one of the most endangered rivers in the world. Pollution, containment and climate change put the river at risk. The Nile has been dammed up to make the river flow more even. Despite this, the water level in both the river and in the artificial lake behind the dam is determined by the rainfall and climate from which the Nile gets its water. This means that the Nile, which is the whole basis of Egypt’s life, is very vulnerable to climate change, new dams or pollution outside the country.

Egypt was the center of one of the world’s oldest and most influential civilizations. From around 3000 BCE. the Egyptian Pharaohs (kings) ruled the country for over 2000 years. Major technological, cultural, political, mathematical and religious innovations have made Egypt one of the most powerful and richest countries in world history. Beyond the 1000s BCE the power of the Pharaohs was challenged, and Egypt became subject to other great kingdoms. Among other things, the country was ruled by Nubia, Persia, the Macedonian Empire and the Roman Empire. In the 600s, the Arabs introduced Islam to the country. From the 16th century, Egypt became part of the powerful Muslim Ottoman Empire. Between 1882 and 1922 the country served as a British colony. Egypt became independent in 1922, but the influence of the British continued to influence the country.

During World War II, Egypt developed into an Arab great power. A growing nationalism between the 1950s and 1980s led to several wars with European powers, and with neighboring Israel. After more than 20 years as a dictatorship with Hosni Mobarak in power, big demonstrations in 2011 led him to step down. The uprising was part of the “Arab Spring”, where the people of several Arab countries demanded more democracy.

Egypt is a republic with a strong presidential power. After the revolution in 2011, changes were introduced in the political system to strengthen democracy. Free parliamentary and presidential elections were held for the first time. After new demonstrations, the new president was also forced to step down. For a while, the military took power, before a new election was held. The winner of this election has since ruled the country. The president is the country’s head of state and is directly elected by the people for a maximum of two four-year terms. The president appoints the government and is the commander-in-chief of the military.

Since the incumbent president came to power, he has strengthened his power. For example, it is illegal to form political parties on religious or ethnic grounds. Among other things, an important power factor and the “Muslim Brotherhood” movement are prohibited. Religion’s impact on politics has diminished, while being the most important influence on society. Religious extremism has become more common since the 1990s. In particular, the Sinai Peninsula has been the center of a growing extremist movement. Throughout the country, women are strongly under-represented in the labor market, in politics and in the judiciary. Women, on average, also earn considerably less than men.

Egypt is the region’s most populous country, and North Africa’s largest economy. The economy is based on agriculture, industry, tourism and revenue from the Suez Canal. There are significant oil deposits in the country, but compared to other Arab countries, extraction and exports are modest. Agriculture employs a significant proportion of the population. In particular, cotton production and the textile industry are important industries. The country imports a lot of food, as there are relatively few areas suitable for agriculture in relation to the rapid population growth. Tourism has traditionally been an important industry, but the political unrest in recent years, and the increasing religious extremism, have, however, led to fewer tourists.

Egypt is struggling with great differences between poor and rich. Around 30 percent of the population lives below the national poverty line. Among the country’s riches, education, work and the reputation of the family are more important than wealth. The same goes for the poor population, but the opportunities for getting a good education or a good job are poor. Therefore, traditional customs are important to follow in order to maintain the reputation of the family. These customs usually mean that daughters are inherited less and are to be married, while sons inherit more and will carry the family further.