Sarajevo at Miljacka’s river valley welcomes its tourists after a very turbulent period that culminated with the civil war of the 1990s. But knock in the table! Sarajevo is now a safe city and the population is warm and hospitable.

With over 70 mosques and the Turkish bazaar Baščaršija, the city is exotic to most of us, although its oriental appearance was probably more characteristic before the Civil War that lasted until 1994. Today you can sense a cosmopolitan feel with a little “touch” of the East.

Sarajevo is in many ways the real link between east and west, and the city is a meeting place for different cultures. A walk through Sarajevo helps you understand this. Here everything has ruled from the Ottoman Empire to Austria. Sarajevo is in fact one of the most historically interesting cities in Europe. Visit e.g. the bridge where Archduke Franz Ferdinand was killed in 1914. The event was the start of World War I.

Look forward to some exciting, and especially enjoyable, days in the Sarajevo Olympics. The Civil War feels infinitely distant today. The city’s residents are tolerant of tourists and want to do their best to make the best possible stay. They are proud of their city, and not without reason. Here are a number of sights, good food and drink, and great scenery.

Get to know Sarajevo

Sarajevo is located at Miljacka’s river valley in Bosnia and Herzegovina, and counts about 400,000 inhabitants including the suburbs.

Sarajevo was founded in the 13th century, but the region has been inhabited since at least a thousand years BC. For a long period, from 1429 – 1878, the city was subject to Turkey. From 1851 Sarajevo became the capital of Bosnia and Herzegovina, which was incorporated in Austria-Hungary in 1878.

The city has had a great impact on Europe’s destiny. Among other things, the assassination of Archduke Franz Ferdinand in Sarajevo on June 28, 1914 led to the outbreak of the First World War.

But in connection with the country’s declaration of independence in 1992, fighting broke out in and around the city. The Civil War, which lasted until 1994, inflicted severe suffering on people and had an impact on the population, population composition and business. The city also suffered significant material damage.

If you visit Sarajevo today, the civil war feels like something that has happened infinitely long ago. Although visible traces are still present here and there. Sarajevo is a big city, but for most tourists it is first and foremost the center, or centar, which together with the Old Town (Stari Grad) is where it is most appropriate to spend time.

The center of Sarajevo is located between the Old Town in the east and the newer districts of Novi Grad and Novo Sarajevo. It is in this district that you will find many of the Olympic complexes that were set up for the 1984 Olympics, including Kosevo Stadium and the Olympic Hall of Zetra, or the Olympic Hall Juan Antonio Samaranch as it really is called. The city center is also the district where you will find most large companies, schools and the hospital.

Novi Grad is the result of the strong growth Sarajevo experienced in the 1970s. From 1975 and the next 15 years, the population more than doubled in this district. Tragically, 92% of all Novi Grad buildings were destroyed to a greater or lesser extent during the 1990s war. Since then, it has done a fantastic job of restoring and rebuilding. You may still find some houses that have traces of the war, but basically, most of the new and modern is in this district of Sarajevo.

Like its neighboring Novo Grad, Novi Sarajevo was developed as a result of Sarajevo’s rapid growth in the 1960s and 1970s. Novo Sarajevo is in many ways the commercial center of Sarajevo and this is where you will find the modern shops. The district also houses the National History Museum and Bsomal City Center. The latter is the Balkans 4th tallest building with its 118 meters. 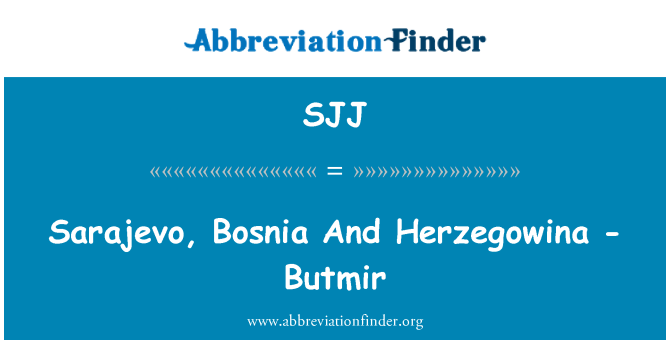 The most commonly used abbreviations about Sarajevo is SJJ which stands for Sarajevo. In the following table, you can see all acronyms related to Sarajevo, including abbreviations for airport, city, school, port, government, and etc.